16 teams will take part in the draw for the final tournament of Euro 2023 U-21: the hosts of the tournament Georgia and Romania, 9 winners of the qualifying groups, the best second team and four playoff winners, including the Ukraine U-21 team led by Ruslan Rotan.

16 teams will be divided into 4 groups of 4 teams. The top two teams from each group will advance to the playoffs. The final games will be held from June 21 to July 8, 2023.

For match planning purposes, the host associations (Georgia and Romania) are assigned positions A1 and B1 respectively. 4 pots have been identified for seeding according to their position in the UEFA Under-21 national teams rankings.

Draw order. The process will start in bucket 4, from where a team is selected and assigned to the first available group (in alphabetical order). To determine a team’s draw position in a group, the ball is drawn from the appropriate bowl, eg Group C, to determine the group position (C1, C2, C3 or C4).

The next ball is drawn, which falls into the next available group. Again, a ball is drawn from the appropriate bowl containing the group positions; the same procedure is repeated until every team in pot 4 has a place in the group in question. Once pot 4 is empty, the draw continues with pot 3, then pot 2 and ends with pot 1. 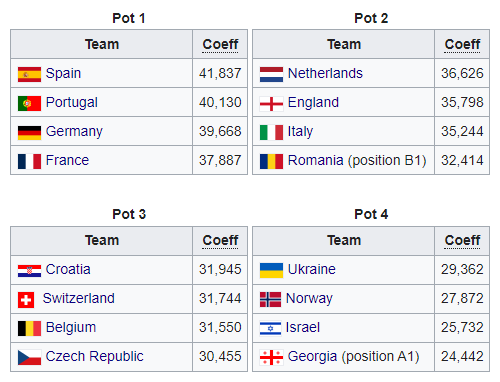 Video broadcast of the draw available on the UEFA official website, starting on October 18 at 19:00.

Fortnite Escape Game: Nightmares, stock up on rewards and challenges for Halloween!

AMD, Google, Microsoft and NVIDIA unveil Caliptra, a project to improve the security of each chip

God of War Ragnarök: Behind the scenes of the long-awaited sequel

Dead Island 2: When zombies like to wait… The game is postponed again and here is its new release date!