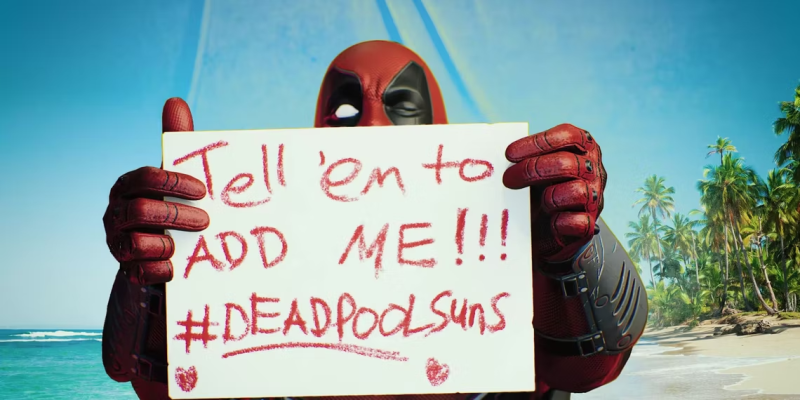 Deadpool took over the Midnight Suns account today Twitter, drawing his face on top of several characters on the cover, as well as naming the account “#DeadpoolSuns”. Deadpool also changed the Twitter account’s bio, naming it “DEADPOOL is here! I’m in full control of this channel until these nerds put me on their Midnight Suns game. Let’s get naughty.”

However, that’s not all. A blog was also released where Deadpool, voiced by Nolan North, says that he wants to be on the Midnight Suns and that he is unhappy with some fan requests, including Moon Knight and, somewhat unexpectedly, Frank Drake. Deadpool even drew his own version of the uniform, which shows him as a wizard.

It’s likely that Deadpool is already in the game in one form or another, and that this ad campaign is just a fun way to announce his addition. He obviously already has a fairly detailed character model reminiscent of his appearance in his own 2013 game, and also Nolan North is voicing him again, which seems like a lot of effort for the character if he’s not already being considered for a game.

And the description of the YouTube version of the video says, “You can’t have a party without Deadpool! At least that’s what he says… Deadpool approached 2K and The Midnight Suns to be included in the team.” What do you all think? Should we accept it?”

While it’s possible that Deadpool will be part of the game’s base roster, it’s also possible that he’ll be added to the first DLC pack. In the illustration for the first DLC pack depicts what looks like a cut from a katana, which was previously thought to be a nod to Blade, but we now know he’ll be in the game from launch. This means that if Deadpool doesn’t make it into the starting roster, then the cut of the katana could be a very clear nod to him. Even the bullet holes can be a reference to Deadpool, so his inclusion in the game at this point is almost a matter of course.

LEGO Star Wars: Reduced price on this sought-after set that will be a perfect Christmas gift for fans!

Valeriy KRIVENTSOV: "The game was a success for the team, we only failed to score a goal"

Need for Speed ​​Unbound: the new gameplay shows us the "Risks and Rewards" mechanics