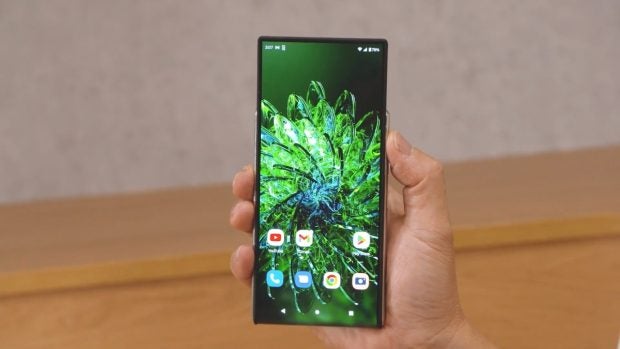 Motorola is researching smartphones and notebooks with rollable screens. The manufacturer showed interesting concepts at its in-house exhibition. The smartphone is particularly compact.

Lenovo subsidiary Motorola used the Tech World 2022 in-house exhibition to present the first concepts of devices with rollable screens. Although Motorola is not the first manufacturer with a rollable smartphone, it does it a little differently than the competition.

The manufacturer’s smartphone concept was developed by the team at 312 Labs, Motorola’s internal innovation group made up of product, research, design and engineering experts. The device differs from the rollable ideas of other manufacturers such as Oppo, TCL or LG: Because while the models of the competitors expand horizontally to release a larger screen area, Motorola’s model increases vertically.

When closed, the screen only offers a handy four-inch diagonal – no more than an iPhone 4 – the flexible OLED panel can be enlarged to 6.5 inches at the touch of a button. This roughly corresponds to the diagonal of a current smartphone.

Basically, Motorola is trying to solve a similar problem with this concept as the Galaxy Z Flip 4 (test) from Samsung or Motorola’s Razr Fold. Both devices have a classic clamshell shape, but have a flexible display that unfolds when unfolded.

While Lenovo is already offering the first notebooks with a foldable display with its Thinkpad X1 Fold, the manufacturer is also experimenting with rollable screens in this segment.

The notebook concept initially has a typical landscape format that can be rolled out upwards and assumes a square shape. The unrolled display is better used for documents or Tiktok-style vertical videos.

Brian Leonard, Lenovo’s VP of design, explains that the rollable notebook is part of Lenovo’s research into new form factors that began with the Thinkpad 360P laptop/tablet.

“The possibilities of a rollable laptop are convincing. It will take multitasking, browsing and mobile applications to a new level,” said Luca Rossi, President of Lenovo’s Intelligent Devices Group.

If you now hope that one of the devices will come onto the market in the near future, you will probably be disappointed. For the time being, these are only concept studies.

Video for A Plague Tale: Requiem - The first 21 minutes