Here’s what makes Resident Evil 4 Remake better than the original – and why, of course, you’ll be screaming again

I’m being cautious and putting a slight SPOILER ALERT at the beginning of the Resident Evil 4 Remake for this article: This is necessary because I want to point out differences from the original that help characterize the nature of this update. I think you can take it.

As the intro to the Resident Evil 4 Remake demo plays, I realize that there’s one thing I particularly like about Capcom’s remakes: Now in its third game to be brought into the modern era using similar rules, Capcom is establishing a tone that’s more consistent is than the old Resident Evil series ever was. Resident Evil 2, 3 and 4 feel like they’re made from one piece and I have to say I really like that.

Resident Evil has become a more cohesive story as it’s modernized – and the move to bring a third-person perspective to Resident Evil Village with the Gold version only ties it all together. So it can go on. I almost wished that the first part would get this kind of treatment again. But first of all: Resident Evil 4 Remake, which I was allowed to play in advance last week! So much in advance: It will be great! 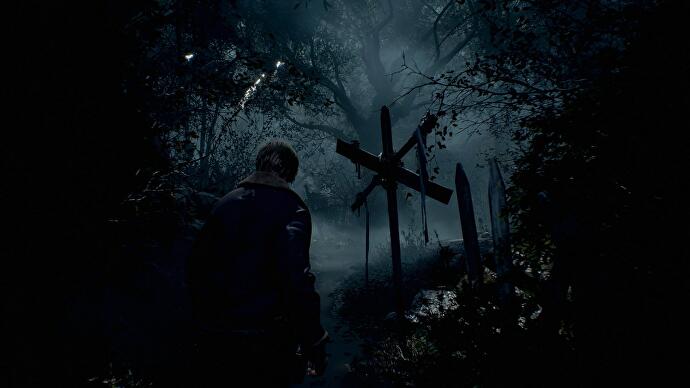 Even the beginning looks more like horror than the old RE4 over the entire term. I’m curious to see whether the Remakle reflects on the darkness in the further course.

As with Resident Evil 2 Remake, the entire game has been recreated in a way that while giving the tone and key beats, everything feels more contemporary. And yes, I also have the feeling that everything is on a larger scale. And above all darker, which is certainly also due to the RE Engine, which can handle light very well. The atmosphere is even more sinister right away, because the forest seems more organic and mysterious at the beginning and you suspect all sorts of things in the undergrowth. It is also an idea more extensive. Instead of seeing the first little house right at the beginning, you stray along the path an idea longer. Nice, because it gives you time to think about what’s lurking around and why Leon only took seven shots for a pitiful 9mm for this job.

Otherwise, this looks like the world you dreamed of at night after playing through a day of RE4. In contrast to the somewhat grey-brownish original, it’s rather hyper-real, a little exaggerated, but wonderfully plastic and dirty. The bear traps, the crows that you can shoot for a chance at items if your ammo isn’t worth anything – everything is still there, just different, more believable, dirtier and further. It looks mangy in the good way, this game. Then, at the house itself, there’s a lesson in how to skillfully use fan expectations against them. We all remember the first meeting with the villager, only here it is very different. It starts on the outside, because the building is significantly larger and consists of more rooms and even a basement. So it’s worth taking a close look around. 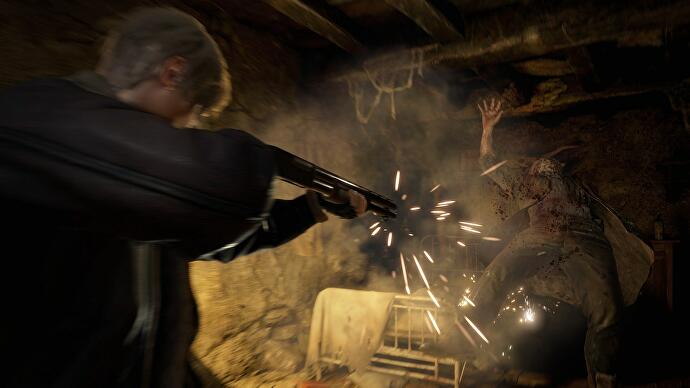 New rooms and processes that have been changed in detail keep the remake fresh.

Inside, at the first meeting, then the next surprise. Because not only has Leon learned a few words of Spanish, he sends the suddenly aggressive man onto the stage himself in a cutscene instead of me being the one pushing it. After that, I’m allowed to explore the building further, make a tasty discovery in the basement… and then I have to flee. On the way out, the villager I thought was dead comes towards me mutated, which, in contrast to the original, makes it clear that we don’t have to be too squeamish about these contemporaries. A smart move that makes me a little more carefree in the coming butchery.

Before I can leave the house, some other villagers enter the house, obviously looking for me. The cool thing is they’re actually looking because they don’t know where I am. This is where a new feature comes into play that I found extremely exciting: stealth elements, since Leon can now sneak. Through a crack in the wall (which wasn’t there at the time) I watched my pursuers for a moment and then secretly, quietly, retreated. I could have fought here too, and even stealth kills are possible when sneaking up from behind. But it wasn’t that far with my guts in this scene. And anyway: This also needs to be carefully considered, because this time the knife required for this is a consumable, a resource that will break at some point. I think it’s fantastic that Resident Evil 4 Remake gives me a choice in this regard and I’m convinced that Capcom designs the scenarios in such a way that avoidance tactics don’t become overwhelming. 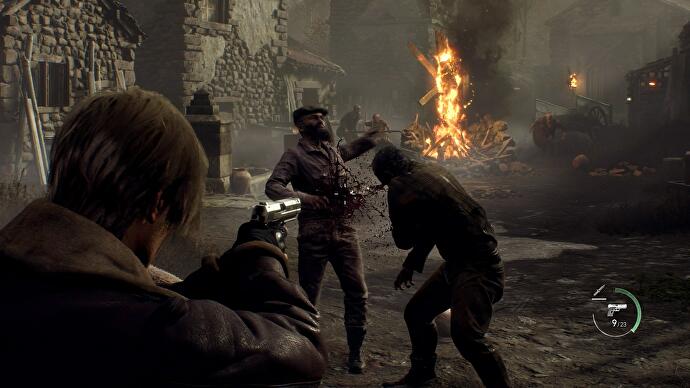 One of the most iconic game sequences of the past 20 years, it’s as gripping as ever in Resident Evil 4 Remake.

So I choose the easier route and duck in a crouch, up the stairs (let’s make it clear it’s horror!), where I find a first hint of Ashley in another new room. For the first time, Leon’s communication with assistant Hunnigan is not staged as a static screen with animated portraits, but is much more natural. A few meters further it goes over a suspension bridge into a forest with moss-covered trees and dilapidated huts, where I learn another knife tactic for the first time: parrying. If you press R1 at the right moment, you repel an attack and throw the opponent back. He staggers and can be sent to the ground with a kick. Here, too, the knife loses stability.

Further through the forest, you will meet the fateful village, which has also undergone some changes. At first I was worried that sneaking, stealth kills, and parries would take some of the pressure off of this legendary scene, but actually the opposite was true. At some point all hell will break loose around the pyre and the screaming of the chainsaw will ring relentlessly in your ears. At that point at the latest, the presence of the parade creates another option, which, however, is above all associated with a risk: You might be able to fend off an attack and then place a nice kick that knocks several opponents off their feet for a moment. But what if not? Isn’t running the better option? Just considering these possibilities made me nervous. 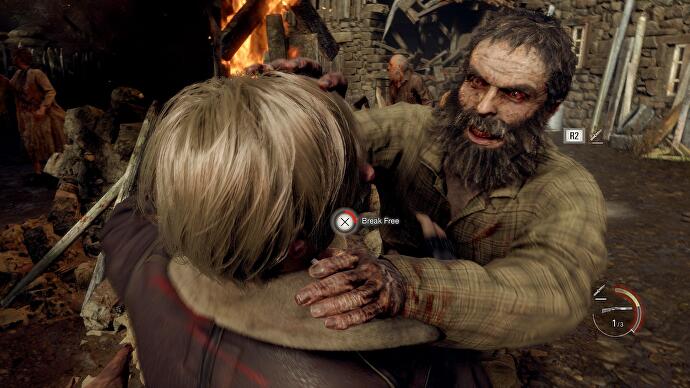 Get away from me – the game!

Things are different here too. In some places, the chainsaw giant destroys the support beams of shelters and parts of buildings, severely restricting my range of motion, which is anything but good for my pulse, because at the same time more enemies are flooding the space than I can kill. You feel incredibly cramped and just… well… “Yikes”! Elsewhere, mid-fight, a cow suddenly catches fire in a barn, then runs frantically through the crowd, taking a few enemies with it. Even the escape to the bell tower has a surprise in store that I wasn’t expecting. Otherwise it wouldn’t be a surprise.

All in all, just like it did then, the scene captures that wonderfully tingly, frenetic feeling of deadly paranoia. That made Resident Evil 4 an overnight sensation – and in the remake it still provokes me to make shrill, spontaneous noises, which are so typical for insanely male winners like this Alex here. It’s a gaming moment that will last forever – preserved in this remake for contemporary tastes and refreshed in enough places to even confuse fans of the original. Controls like a dream, looks fantastic – and with more courage to dark and dirt, it possibly even strikes a more relaxed balancing act between horror and action than the original Anno 2004. 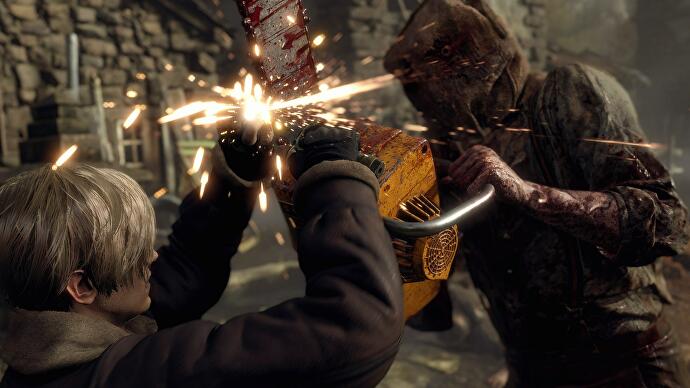 You can get a little cynical about all the remakes these days. But when they do as well as Capcom did, the world feels right again for a moment.

It’s really a shame that the demo was over at this point. That was an impressive half hour with a game that I’m really looking forward to now.

Pentiment has entered the Gold phase

Realm of the South Winds in Genshin Impact: how to get through and collect all the coins

From the RE4 Remake gameplay video to the new Village demo: here are the news of the Showcase

Resident Evil 4 Remake: Ashley, Luis, Sadler and the horror of El Pueblo in the Story Trailer