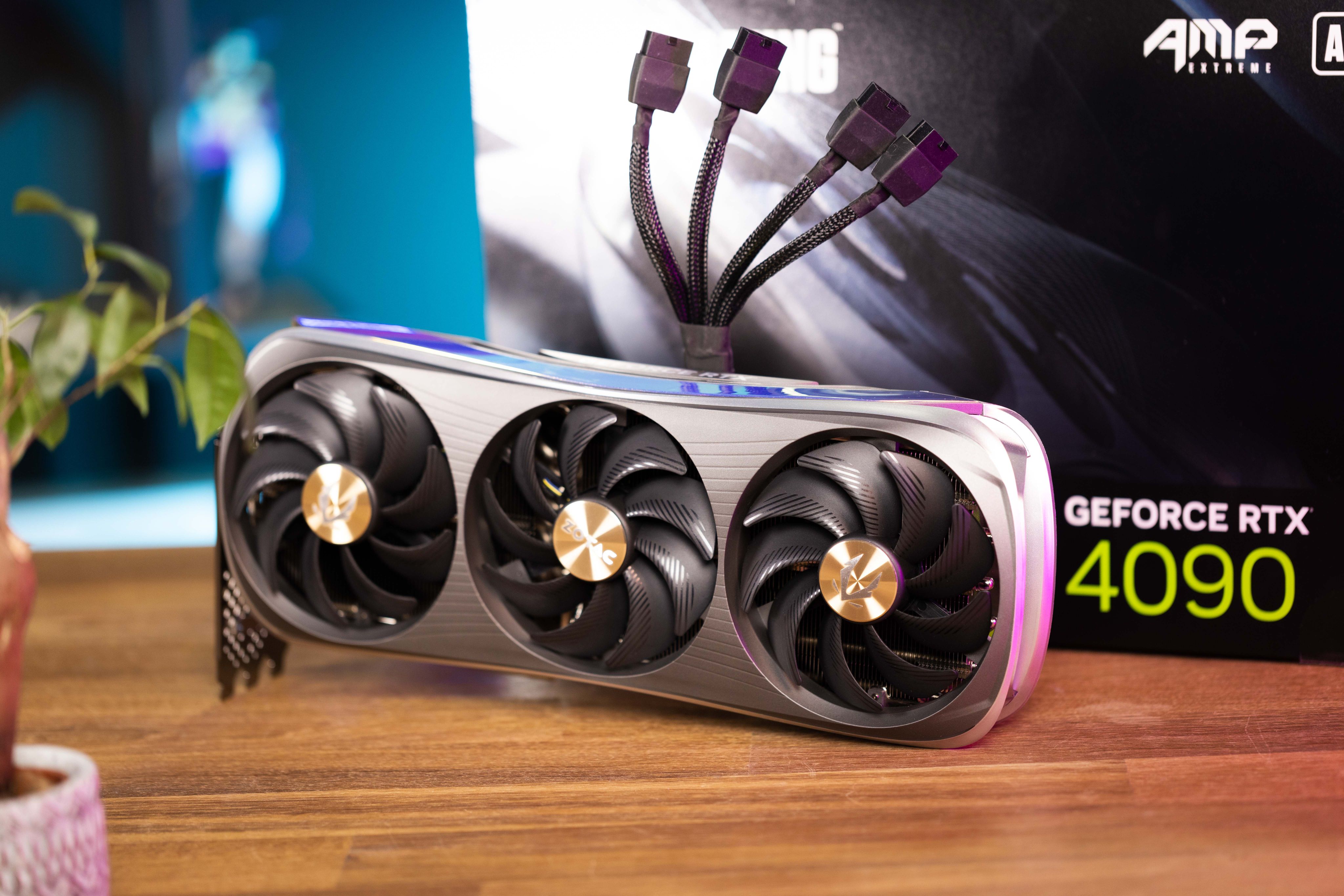 RTX 4090 and power supplies as a YouTube video: What do you really need?

Written web version of the power supply practice article.RTX 4090 in the extensive Raff test with all the details.Power supply purchase advice: Power supply easily explained, with tests and comparisons.GPU index with the RTX 4090, Radeon cards and Co.

Below is the written transcript of the video.

While the Ampere generation from Nvidia, i.e. especially the RTX 3080 and 3090 due to peak loads, still has a safety shutdown, depending on the power supply, we cannot observe the same weakness with the significantly more powerful RTX 4090. The price is absurdly high, but technically you can hardly fault Nvidia. Depending on the CPU, the rest of the system and overclocking or undervolting, power supplies with 850 watts should be absolutely fine in most cases. Or let me put it this way: If you already have an RTX 3090 in your system, you don’t need to worry about upgrading to a 4090. Future ATX 3.0 power supplies are by no means necessary with the current generation. Even 1,000 watt power supplies are not mandatory, as long as you stay within reason and the CPU does not draw 300 watts and the GPU 550 watts in games. Naturally, this should only be the case for very few. But let’s go through the data first.

We looked at the watt classes from 650 to 1,650 watts, with multi- to single-rail and power supplies with and without a native 12-volt high-power cable. As a reference we took the RTX 3090 ROG Strix on the one hand and the Asus TUF and the Palit Game Rock on the 4090. The differences between the last two were practically identical for this practical PSU test, but we were able to increase the power limit a bit more with the Asus, so that up to 600 watts would be possible if the voltage were also increased for some reason . The GPUs found their place in our B660-I board with a non-limited i7-12700K.

As a test scenario, we carried out a maximum continuous load on the GPU and CPU with Furmark plus Cinebench R23. The processor draws around 200 watts. But nothing could be more artificial than having the CPU and GPU running simultaneously with maximum power draw. That’s why we used two game scenarios to help. Once an everyday, demanding game like Cyberpunk 2077 and Metro Exodus Enhanced Edition, where you constantly go to the menu, play alt-tabbed with different resolutions and so on. And once a nightmare scenario with a suboptimal load. That may sound strange, but one of the most reliably reproducible peak load scenarios would be the PUBG main menu without a frame limit. No, you didn’t mishear, when switching between the tabs in the main menu, the GPU load jumps at absurd intervals and, above all, very abruptly. This is ideal for our test, because it allows us to panic power supplies. So if you go to the shop and your computer suddenly shuts down completely and then boots up again, you most likely have just such a case. We tested in the stock, overclocked and with the RTX 4090 also undervolted, i.e. with a lower clock and more economical consumption in the period of 15 to 30 minutes per scenario and power supply.

Lo and behold: The RTX 3090 lets power supplies drown much more often than the 4090. Experience has shown that this can still happen with the RTX 3080 and 850 watts, depending on the age of the power supply model, for example in peak load bingos such as the PUGB main menu without fps -Limit. With the best will in the world, with a 550 watt power supply you should simply upgrade for a 4090, because firstly there is usually a lack of 8-pin connections and secondly you should not overstrain the continuous power permanently.

Even if the Multi-Rail Be Quiet Straight Power 11 Platinum with 650 watts ran without any problems with the RTX 4090 TUF and the Palit Game Rock, we explicitly recommend a higher wattage class or at least undervolting of the all-round impressive card. With manual overclocking and the further raising of the power limit, the consumption increases up to 550 watts (that’s the maximum in practice), but the spikes are less aggressive compared to the RTX 3090 and therefore above all in practice gracious. Depending on the housing, permanent overloading of your power supply unit can not only lead to overheating and thus renewed protective shutdown, but also to higher residual ripple, lower efficiency and other negative effects. Your hardware then ages faster. The applied practical load should therefore not exceed the nominal power of your power supply unit, even if the computer is running without problems.

As long as you don’t want to squeeze the CPU and GPU to the very last watt for some reason, and you shouldn’t do that with the RTX 4090 anyway, then an 850 or even 750 watt power supply is sufficient. At 750 watts, however, you should rather undervolt and tune your card more efficiently. As a stable starting point for your card, you can try 2,600 megahertz at 875 millivolts in the MSI Afterburner in the voltage curve. In games like Cyberpunk, the CPU doesn’t draw 200 watts, but a more humane 70 to 100 watts, as in our case with the i7-12700K. If you exploit the card’s sweet spot, your computer can consume less overall than the card without limits alone. In games with the undervolting, we came up with a total of about 400 to 470 watts at the socket.

But even without undervolting, the Founders Edition of the RTX 4090 would often be more economical in games compared to the 3090 and 3090 Ti. The most impressive would be the difference in Anno 1800 with Full HD resolution.

Finally, let’s talk about the connections. Every RTX 4090 should come with an Nvidia four-pronged adapter. The conventional 8-pin PCI-E connectors are connected on one side. Three 8-pin plugs are mandatory with the Nvidia adapter, four ensure that you can increase the power limit in the Afterburner over the 450 watt board power. At best, you shouldn’t do that, because the additional consumption doesn’t make sense from either a performance or efficiency point of view. Especially in packed cases. At the other end of the adapter is the 16-pin 12-volt high-power connector, which can officially transfer up to 600 watts. The connector itself is not directly linked to ATX 3.0. Older ATX 2-series power supplies can also support this connector. If you want to know more about ATX 3.0 and especially the 12-volt high-power connector, then watch our video about it, where we also go into more detail about the sense lines. In the Nvidia adapter and the previous cables that we got our hands on, the other two services were unused. We’ll have to wait and see how this affects real PCI-E 5.0 cards that are still to come, but it will probably be some time before that. The RTX 4090 is “only” PCI-E-4.0.

Theoretically, fewer than three 8-pin PCI-E connectors could be connected to the Nvidia adapter, as long as the other sense signals are grounded. In practice, you shouldn’t do that. Simply connect three or at best four plugs, which ideally do not hang on the daisy chain cable, but run individually from the power supply. But here too: As long as the front fans in the case also provide cooler air in the power supply chamber, this should not make any significant difference in practice, as long as all cables are attached correctly and without strong bends at the poles.

There are power supplies such as the Asus Thor 2, Thermaltake Toughpower GF3 or Seasonic Prime TX series, which also come with native 12-volt high-power connectors. With other power supplies such as Corsair or Be Quiet, cables are offered as supplements for certain models for a fee. This of course saves the four-prong and a lot of cable clutter. But not all power supplies have a native connector. However, this is not absolutely necessary due to the adapter. If you already have a power supply, then ask the manufacturer whether your model offers a native cable or not.

Let’s sum it up: Nvidia’s new top graphics card is technically a real dream, even if the proud price of almost 2,000 euros also impertinently demands a second kidney. In times when 50 to sometimes 70 cents are due per kilowatt hour, the purchase price is very high. Anyone who chooses the RTX 4090 will probably not save on the power supply, but buying a new one is often not necessary as long as your overall system does not overwhelm your existing power supply in terms of wattage consumption. Theoretically, 650/750 watt power supplies would also be conceivable with undervolting, but don’t forget that the profile in Afterburner must be activated at all times. If the profile is reset after a driver update, your power supply could be overused. The recommendation of 850 watts is completely valid, 1,000 watts as a buffer would be even better, but not absolutely necessary. 1,300 to 1,600 watts would only be necessary in borderline cases. Let’s take something as obscure as an overclocked 700-watt Threadripper with an RTX 4090 overclocked to the breaking point, with more applied voltage and simultaneous maximum stress on both components – however that is supposed to happen. That shouldn’t be the case with you.

Real ATX 3.0 power supplies will probably only become important with oversized PCI-E 5.0 graphics cards. However, it could be a while before they hit the market en masse. So, to put it in the spirit of The Hitchhiker’s Guide to the Galaxy: don’t panic!

You can find more information and benchmarks for the RTX 4090 in our detailed overall test by Raff – with data, comparisons and more. If you are currently looking for a new power supply unit, please take a look at our new online power supply unit purchase guide, you will find the link in the description. I also explain basic things about efficiency, how many watts you really need, where details such as residual ripple and the like can have an impact and much, much more. In our 11/22 issue, we tested 12 1,000-watt power supplies in the laboratory. You can also find the comparison test for the 1,000-watt class online as a Plus article. We can only carry out such complex tests with your support, so we are really grateful for every PCGH Plus subscription. And something else on our own behalf: Power supplies are not necessarily exciting, but there is definitely something to unravel. Would you like a general and inevitably longer power supply video, or should we stick with smaller, more focused videos like this? And what do you think of the RTX 4090? Do you see it as well as I do – technology hui, price ugh – or completely different? As always, please let us know what you think in the comments. If you have any questions, we will try to answer them as best we can in time. A like and subscription would help us out and otherwise: Until next time, have a good time!

Elon Musk said that Tesla will cost more than Apple and Saudi Aramco combined - now its cost is 7 times lower ($695.76 billion vs. $4.38 trillion)