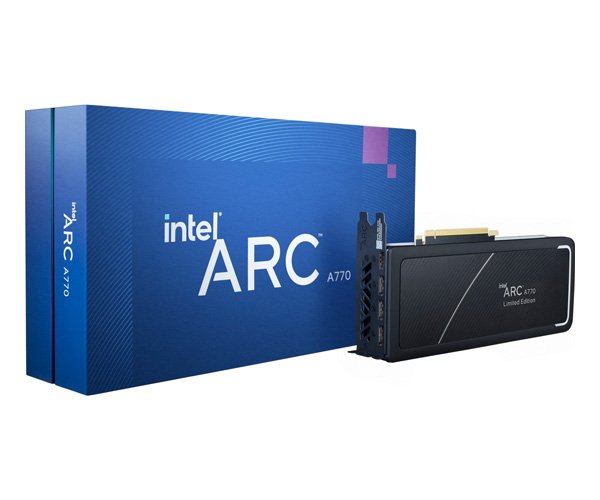 October 20th, 2022 at 1:41 p.m. by Oliver Jäger – Meanwhile, offers for the Arc A770 and Arc A750 graphics cards from Intel, which are almost impossible to find, can be found on the online auction platform Ebay. However, these come from scalpers who offer the cards at greatly overpriced prices. The Arc A770 with 16 GiB VRAM is even listed for twice the MSRP.

The problem with the new Arc desktop GPUs lies more in their availability. They are virtually impossible to find on the German market. Only one retailer in the form of NBB currently lists an Arc A750 for 349 euros in this country, otherwise there is a gaping void. To make matters worse, there are now scalpers who offer Intel’s new GPUs at crazy prices. This is especially true of the Arc A770 with 16 GiB, which you can now buy on Ebay for 799 US dollars, the equivalent of around 816 euros. This is just a doubling of the RRP.

The Arc A750 is also represented on Ebay, but not so drastically overpriced, but also well above the list price. 400 US dollars is required for the model, which should correspond to around 408 euros in euros. Of course, for customers who have been on the verge of getting their hands on an Arc GPU, this is annoying, especially when you look at the pricing and availability of competing cards. Because GPUs from Nvidia and AMD can be bought for around 800 euros, and they perform better overall in tests than the Arc A770.

Also interesting: Intel Arc-A7 graphics cards: solution against high idle power consumption – users have to do it themselves

For example, a Geforce RTX 3080 is available for around 800 euros, as is a Radeon RX 6900 XT. Graphics cards with a similar level of performance as the two Arc GPUs are therefore much cheaper to get. So if you really want an Arc graphics card, you’ll have to wait and see until the meager availability changes. Exorbitant scalper prices should not be paid anyway.

be quiet! introduced a line of power supplies System Power 10

Cosplay of Jinx from LoL & Arcane looks like real artwork!