10/20/2022 at 4:41 p.m. by Norman Wittkopf – Spider-Man: Miles Morales is the next Playstation hit that comes as a PC port, but for maximum graphics enjoyment, the appropriate computing power should also be available.

After the PC version of Spider-Man: Miles Morales was given a first teaser and the minimum and recommended system requirements last month, the developer studio responsible for the port, Nixxes Software, once again posted the hardware requirements for the prettied Playstation title on Twitter concretized.

In addition to the already known minimum and recommended requirements, there are also gradations for high graphics settings as well as “Amazing Raytracing” and “Ultimate Raytracing” as maximum settings for modern lighting effects using beam calculation; the latter considering 60 frames per second with the UHD resolution of 3,840 × 2,160 pixels.

The whole thing is accordingly hardware-hungry and so a Geforce RTX 3080 from Nvidia or a Radeon RX 6950 XT from AMD from the upper class are required for maximum graphics enjoyment on the GPU side. On the CPU side, too, there should be plenty of power with the 12-core Core i7-12700K from Intel or AMD’s counterpart in the form of the Ryzen 9 5900X, whereby the main processors should also have 32 GiByte of RAM available. As with all other settings, 75 GiByte hard drive and at least Windows 10 64-bit are required. 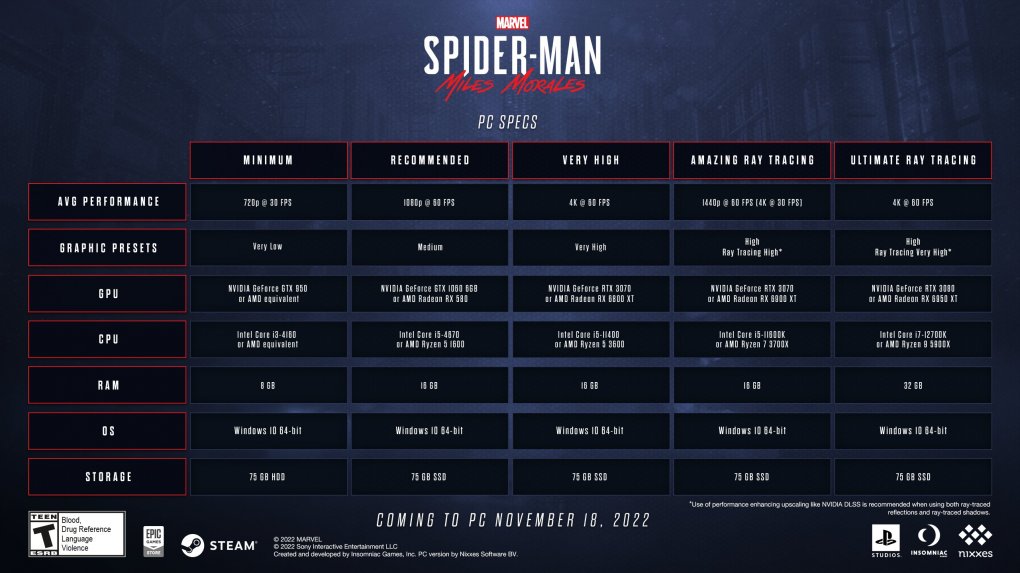 In order to be able to play the game at all, a Core i3-4160 or AMD equivalent, 8 GiB of RAM and a graphics card like a Geforce GTX 950 or Radeon RX 470 should be enough. As recently announced, Spider-Man: Miles Morales will be released on PC on November 18th and will also support Nvidia’s performance and picture-enhancing upscaling technology DLSS 3.

Final Fantasy XVI: New "Ambition" trailer goes into the story and the characters

Samsung and TikTok, the new allies of online music

The release of Sonic Frontiers is a “global gaming test”, the project will be finalized

RTX 4080 will arrive at a ridiculous price… It’s crazy!