Tesla’s revenue in the third quarter grew by more than one and a half times, but was below market expectations

This week, Tesla released a detailed financial statement. reporting, adding to recent data on the number of electric vehicles produced and shipped in the third quarter. Revenue rose 56% year-on-year to $21.5 billion, but analysts were looking at $21.96 billion on average. On the other hand, the company managed to increase the operating profit margin to 17.2%, which is an important achievement in a difficult business environment. 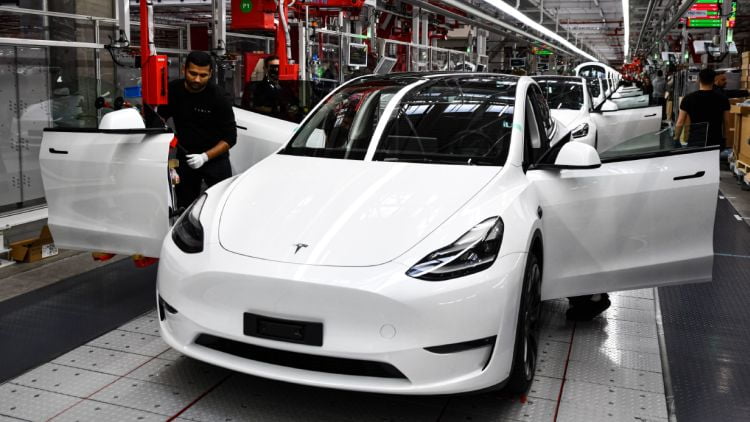 As reported in Tesla’s quarterly report, revenue grew due to an increase in the volume of deliveries of electric vehicles and an increase in the average selling price, but the strengthening of the US dollar had a negative impact on the company’s financial performance. Moreover, the average selling price of an electric vehicle decreased in sequential comparison, largely due to the extended lockdown in the second quarter, which prevented the Shanghai facility from producing enough electric vehicles and thus created a “high base” effect for comparison.

Net income for the third quarter was $3.3 billion, operating profit reached $3.7 billion, but the strengthening of the US dollar had a negative impact, reducing this figure by about $250 million. delivery services. Tesla’s spending and efforts to increase the production of electric vehicles at enterprises in Texas and Berlin increased. At the Austin site, production of 4680 battery cells has been consistently tripled, but this has also hurt profits. In Germany, by the end of the third quarter, Tesla brought production volumes of Model Y crossovers to 2,000 units per week, but only using cells of the 2170 type. Despite rumors about a delay in migration to 4680 cells, Tesla expects to introduce integrated into the power structure of the battery body and switch to the use of a monolithic lower front part of the crossover body. In Texas, both stages of the assembly process have already been implemented since the beginning of the year.

The Shanghai facility continues to be Tesla’s main manufacturer of electric vehicles for export outside the United States, assembling Model 3 sedans and Model Y crossovers, with a design capacity of more than 750,000 electric vehicles per year. In Texas, it has now begun equipping production lines for the production of electric Cybertruck pickups, which will start from the middle of next year. The Nevada facility, which has historically produced traction batteries in collaboration with Panasonic, has already started assembling Semi electric trucks, with deliveries to customers starting this December. By 2024, about 24,000 of these trucks will already be on the roads of North America, according to company management estimates.

By the way, purely in the production of electric vehicles, Tesla’s profit margin reached 27.9%, few of the major automakers can boast of such a business profitability, but a year ago it reached 30.5%. The company ended the quarter with $21 billion in cash and aims to maintain its 50% annual production expansion rate over the coming years. If the board of directors approves this initiative, Tesla could spend from $5 to $10 billion next year to buy back its own shares. Elon Musk predictably believes in the potential of these securities, declaring that Tesla’s capitalization will one day bypass Apple and Saudi Aramco combined. For comparison, now the capitalization of Tesla does not exceed $700 billion, while for Apple and Saudi Aramco this figure reaches $2.3 and $2.1 trillion, respectively.

Musk spoke at the quarterly event about the upcoming deal with Twitter. It inspires him with optimism, although it leaves the feeling that he and other investors will overpay for this asset.

As Elon Musk summarized, Tesla’s electric vehicles continue to be in excellent demand, but in the short term the company will have to deal with logistical difficulties. The latter will not only limit the number of electric vehicles supplied to customers, but also increase the company’s costs. To address this issue, Tesla will begin moving to a more even shipping schedule, which has so far been heavily skewed towards the second half of the quarter. Recall that having released 365,923 electric vehicles in the third quarter, the company was able to ship only 343,830 units to customers. Production is still growing at a faster pace than supplies. Another “bottleneck” is the slow expansion of Tesla’s service and sales network. The corresponding representations of the company in the third quarter became the most by 6%. In the foreseeable future, the pace of expansion in the production of electric vehicles will continue to be constrained by factors associated with the production of traction batteries.

Italian Cup. Spezia, Parma and Monza made it to the 1/8 finals

Again defeat. Motor lost in the German Bundesliga by 6 goals

For sole proprietorships of the 3rd group, they offer a new automated system based on Diya on a simplified basis – banks will report and pay taxes for them – Aroged

In Gotham Knights, you can break Batman’s rule and throw bandits off the roofs of buildings