They are small, cute and 100% electric. We took advantage of the Mondial de l’Auto to drive two microcars that leave no one indifferent. 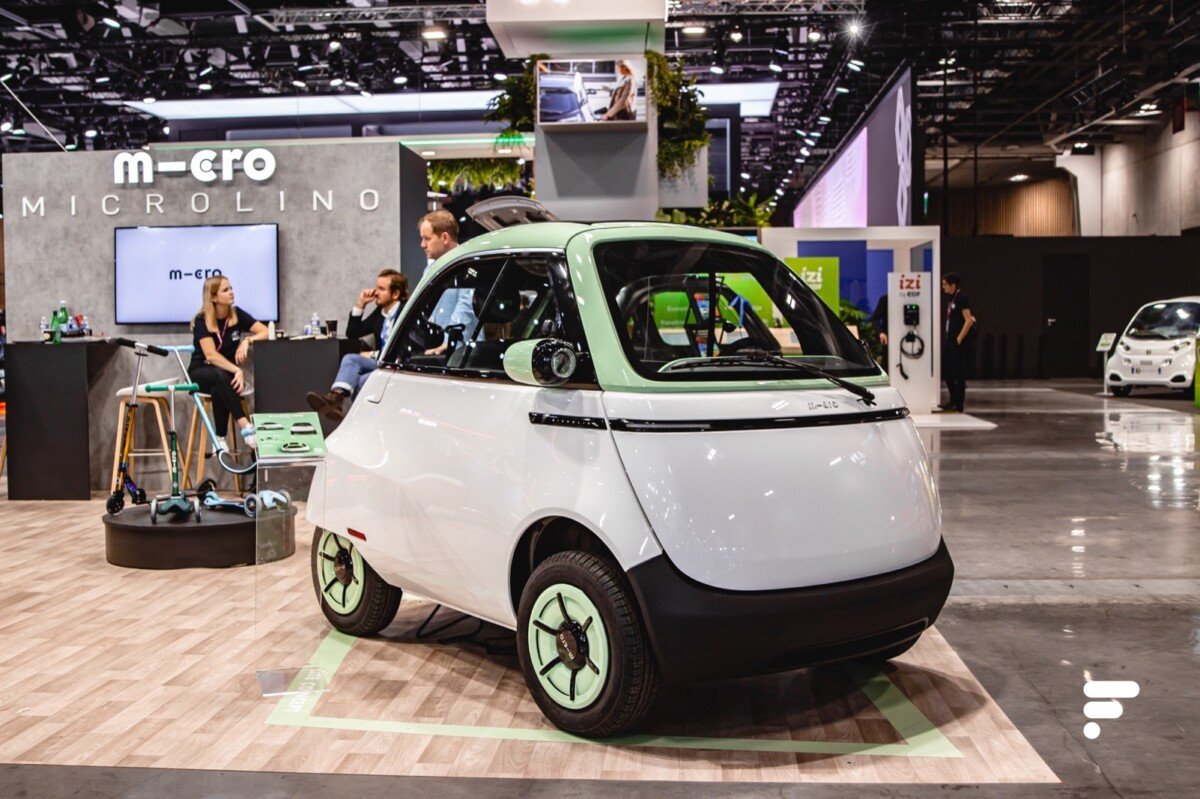 In the same vein as the Citroën Ami, microcars have invaded the Paris Motor Show. We’ve seen them all, and above all we’ve had the opportunity to drive the Microlino and the City Transformer CT1 in the streets of Paris.

Like the Mobilize model, a Renault brand, which presents the heir to the Twizy that you can see next to Renault’s big stand, opposite VinFast, a dozen microcar models were exhibited in Paris. 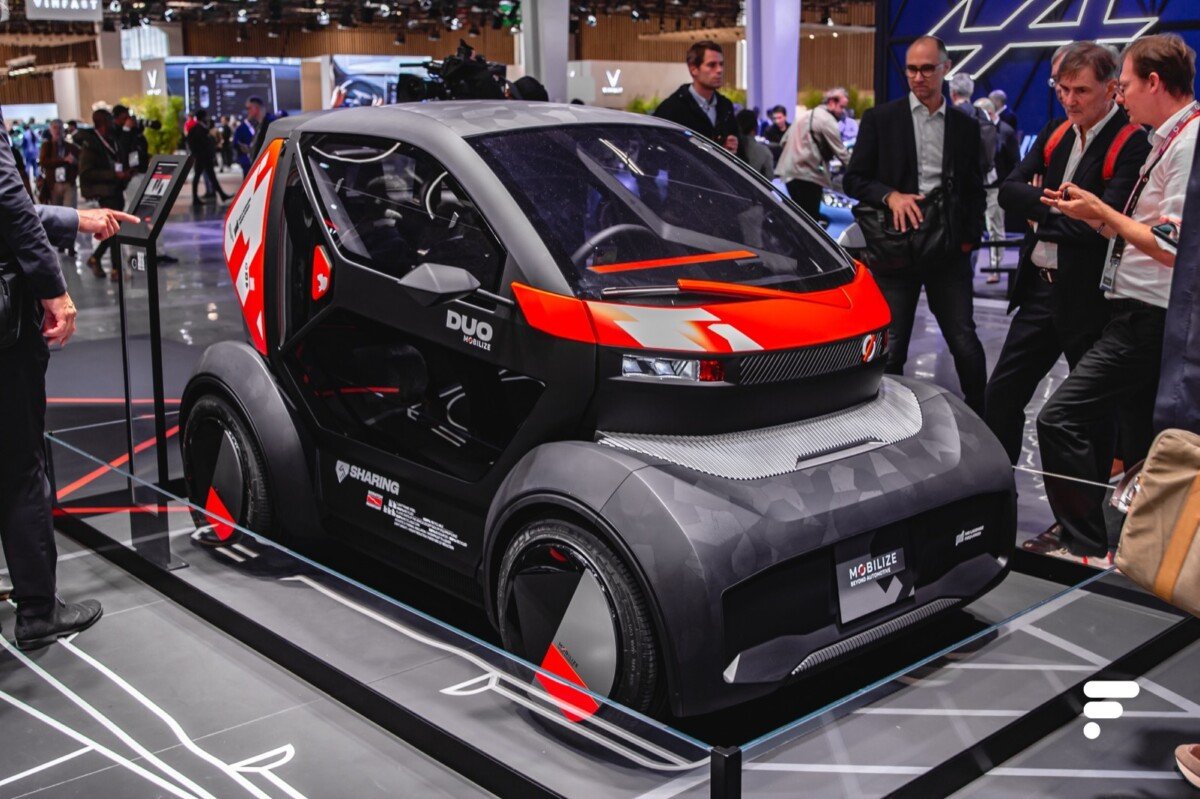 We can thus see the Israeli City Transformer with its 1 meter wide CT1 model. The Swiss Microlino presents a cart whose autonomy potentially reaches 240 kilometers. There is also the Czech Patak with a small futuristic-looking roadster. Without forgetting the French Bagnole with the Méhari look. 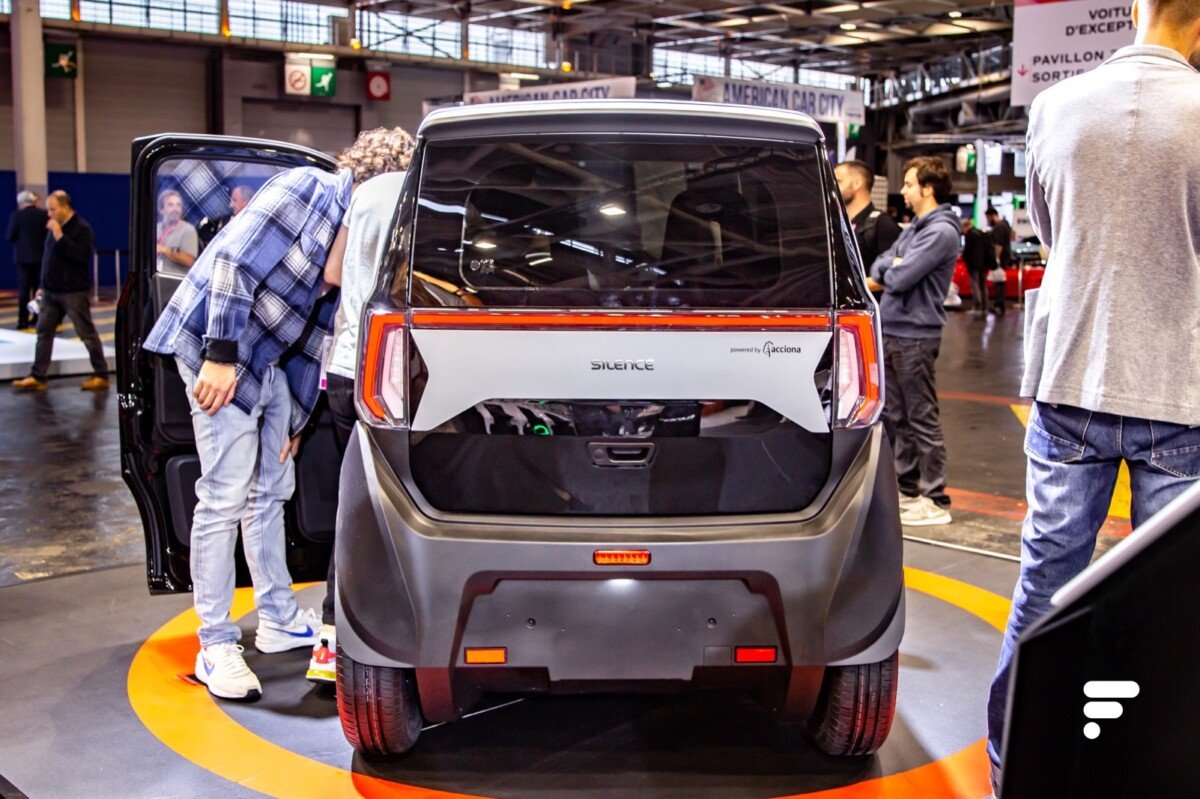 We also came across a model of solar vehicle developed by the Dutch Squad city. We also saw the Xev Yoyo, a luxury Citroën Ami. And, the Silence S04 which partly takes up the DNA of the brand’s electric scooters. Finally, the Next e.GO Mobile e.wave to which we have dedicated an article. 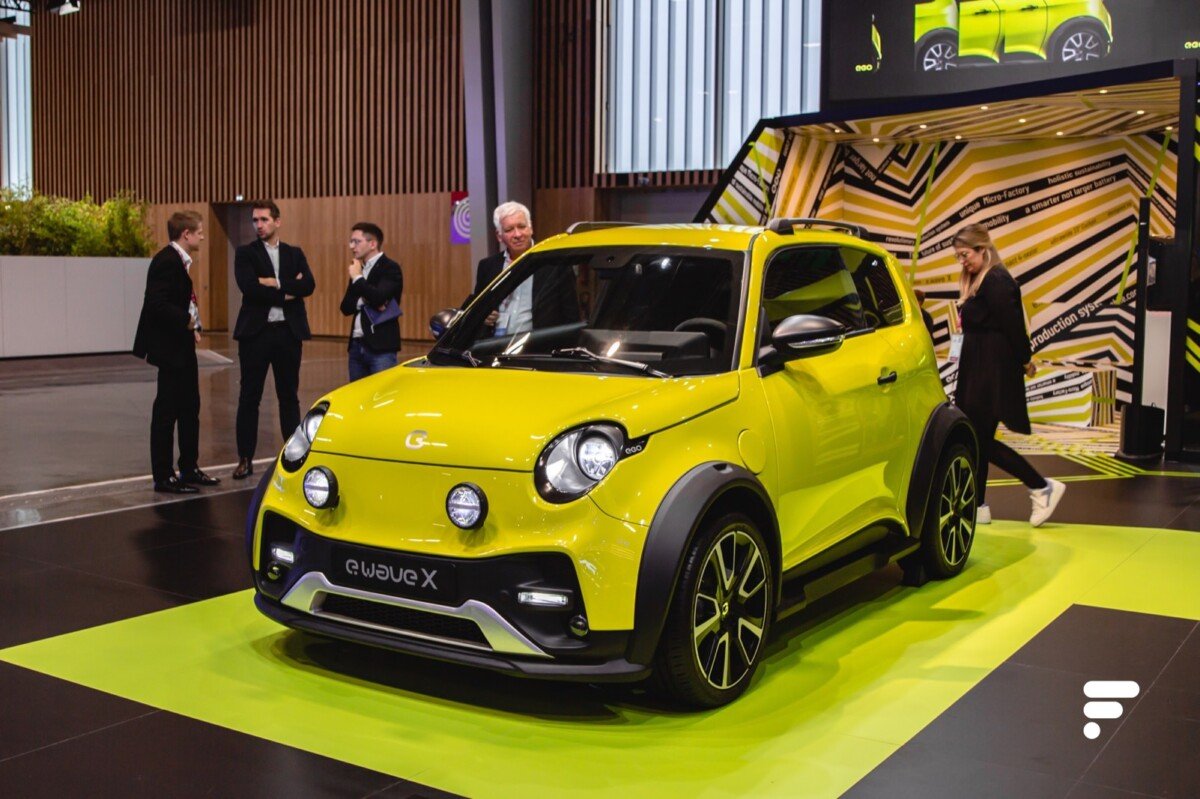 We didn’t have time to test them all, but we took the wheel of two models: the CT-1 and the Microlino. It was at the end of the day, at night and especially in the rain. Certainly the most fun context to drive in the streets of Paris.

Put aside your prejudices, we take the wheel of this cart in the streets of Paris. First of all, standing next to the CT-1 is already quite an experience. It is 1.58 meters high, 2.50 meters long and only one meter wide. 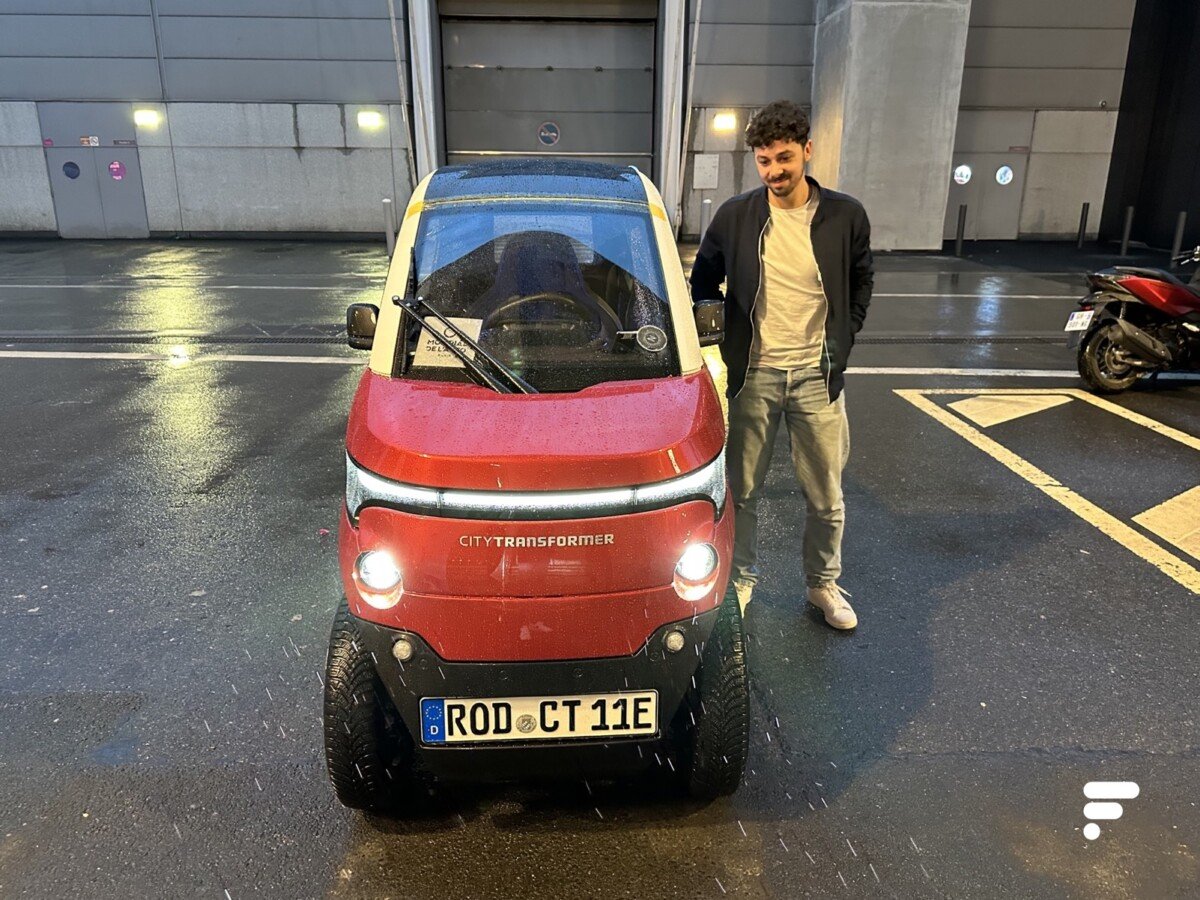 Anthony next to the CT-1 // Source: Ulrich for Frandroid

The first impression almost resembles that of the first Smart: once inside, the vehicle seems much larger. The two seats, one behind the other in the CT-1, offer enough space for tall people. Personally, I’m less of a fan of this configuration, one behind the other, because I find it less user-friendly to drive.

Two small screens in the cockpit provide all essential information, infotainment and connection to the usual apps and services. We even have built-in speakers, as well as a location to position your smartphone (on the left). I suspect the built-in tablet, on the right, to be a simple Android tablet with an app that lets you control everything, including music. 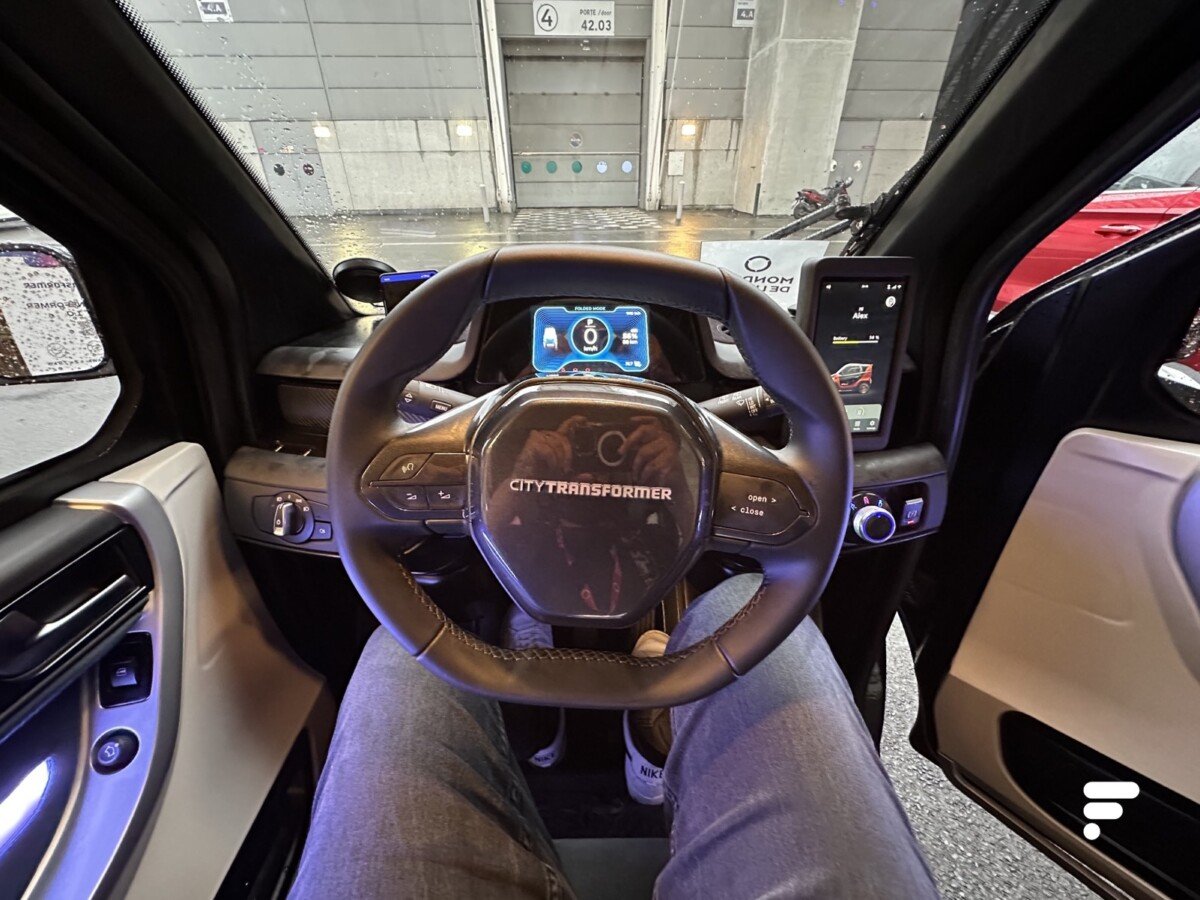 Unlike other L7e class vehicles, whose empty weight does not exceed 450 kilograms like Renault’s Twizy, the CT-1 is fully enclosed and air-conditioned. The 14 kWh battery under the floor and the two 7.5 kW electric motors deliver decent power. From our point of view, it’s not as powerful as one might have imagined: the acceleration is relatively slow, but sufficient for propulsion. This does not prevent to circulate quietly between scooters, bicycles, buses and cars.

This car goes 90 km/h, but there is a trick. With 1 meter in width, it cannot exceed 45 km/h. Do you see the picture above? The button on the steering wheel with the words open and close. Once you are driving, pressing this button for a few seconds widens the car: the wheels then start to move and the car goes from 1 m wide to 1.40 m. It is surprising and intelligently thought out. 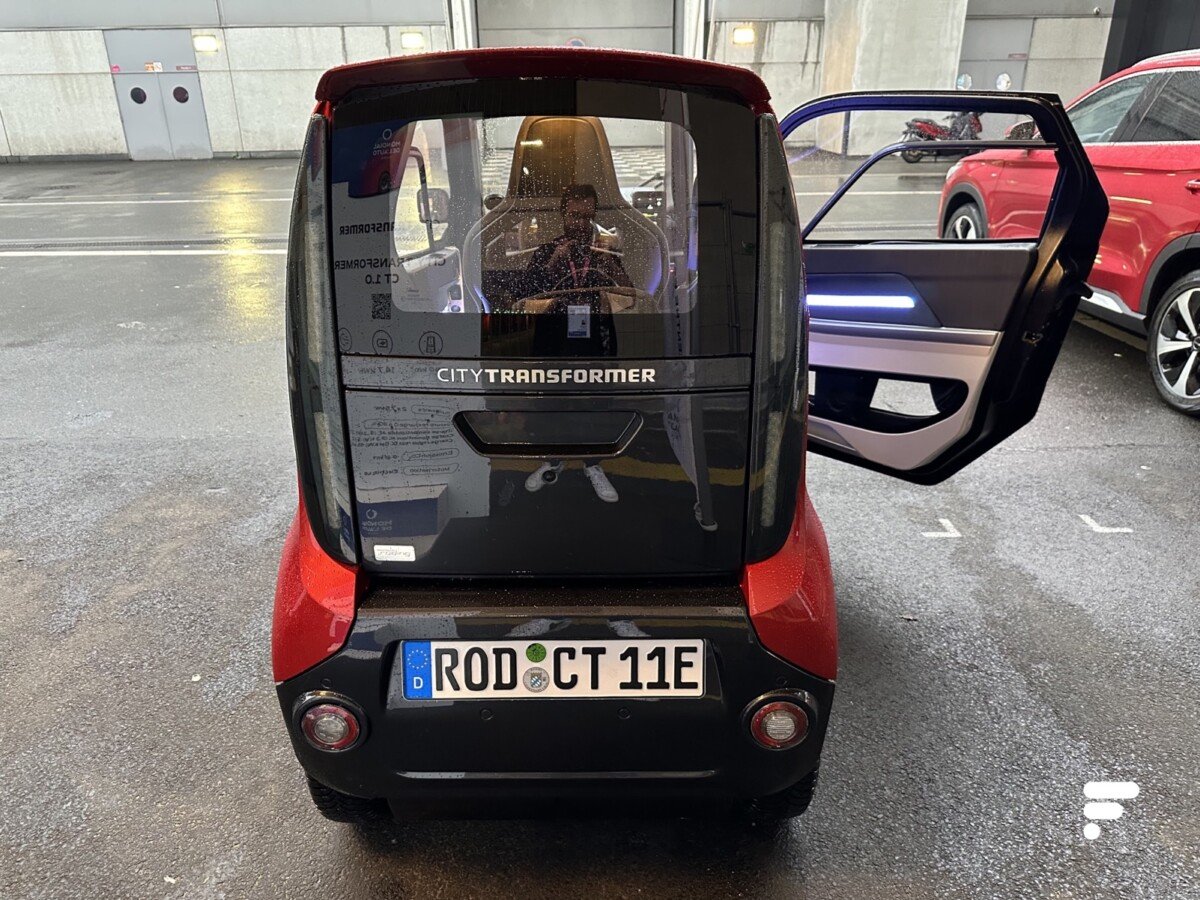 One of the problems with microcars is the acoustics: everything buzzes and creaks. Despite the fact that this is a prototype, it’s normal, you have to get used to it. This is the case in all small cars. Another problem with this CT-1: its trunk is ridiculous when there are two people in it. You have to fold down the second seat to take advantage of a minimum of space in the trunk. 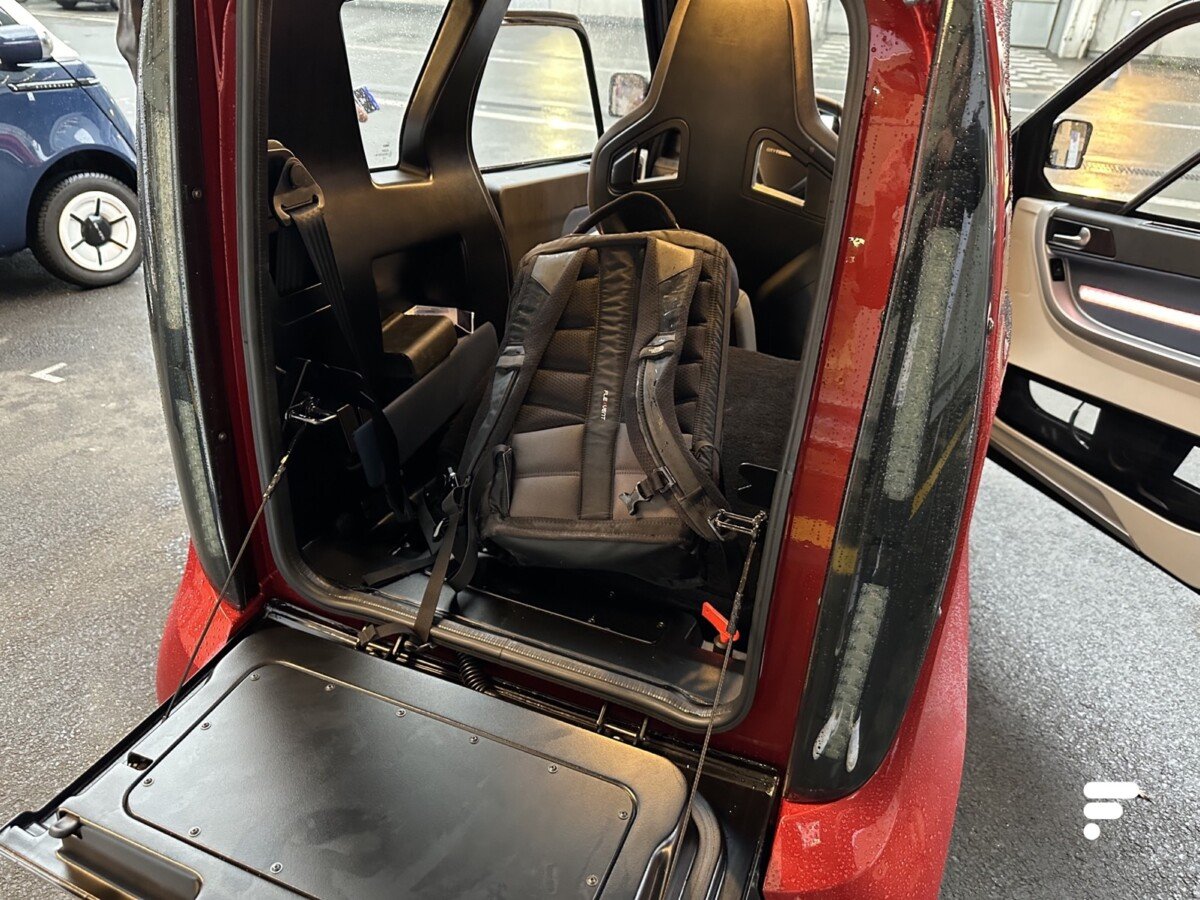 The trunk of the City-Transformer CT-1 when the rear seat is folded down // Source: Ulrich for Frandroid

The CT-1 should come off the assembly line in Europe from 2024. Its price is around 16,000 euros. For 12,500 euros, however, early enthusiasts can already pre-order the car via the website.

Microlino, the cutest of all

Sometimes the old ideas are the best. It’s no wonder so many people look back to the past for inspiration. This is somewhat the case with this Microlino, which comes to us from Switzerland. With its old Fiat 500 eras, it is above all like the Isetta. They look alike like two drops of water. To look at, the Microlino is very beautiful and very cute. But under this retro side and this charm, it is resolutely modern. 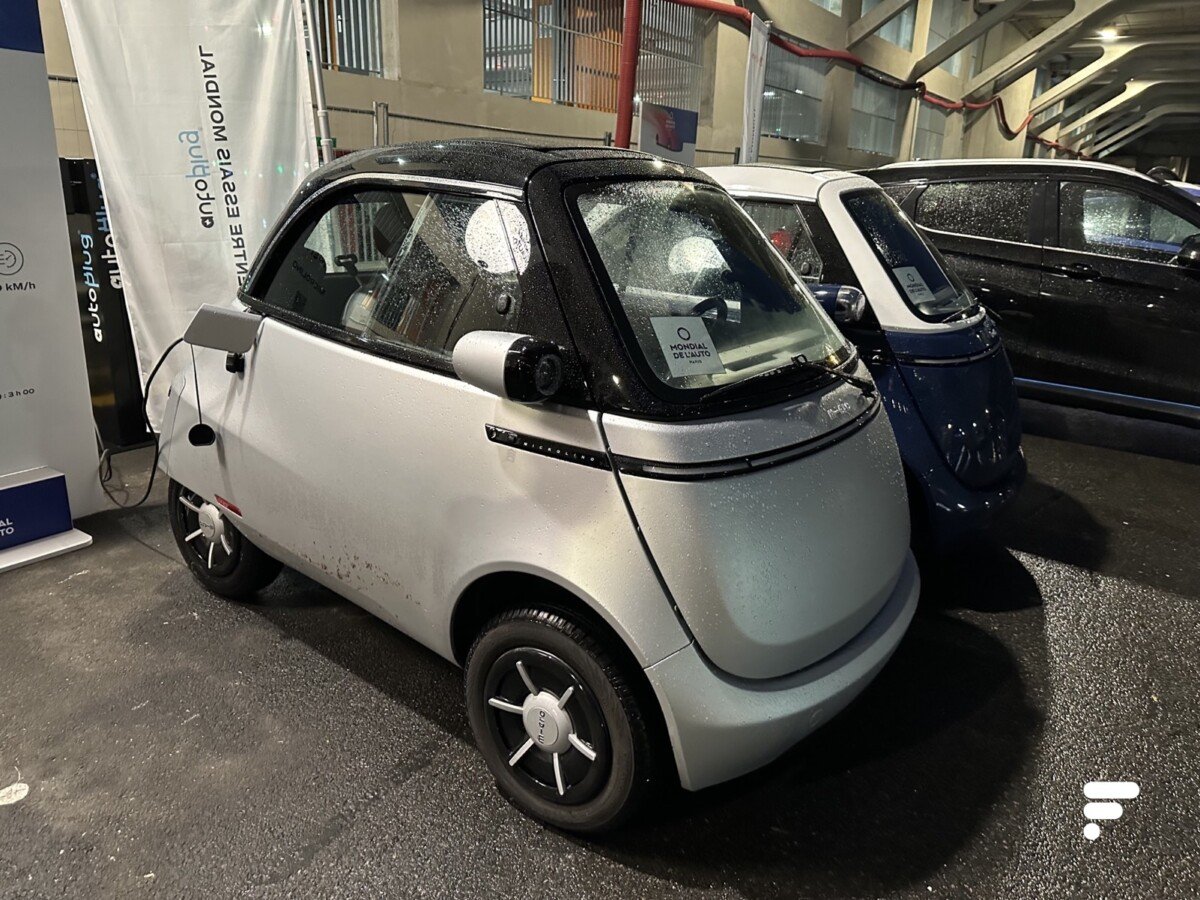 Already, she is very small. It’s only 2.5 meters long and 1.5 meters wide, which is almost exactly the same dimensions as the first-gen Smart. The Microlino has two rear wheels, rather than just one like the Isetta. And, just like in the 1950s, the door is hinged at the front.

The dashboard pivots with the door. When the door closes, you feel like you’re about to take a ride in a roller coaster. There’s no ABS, airbags or other modern safety systems, but there’s has a seat belt for both places. 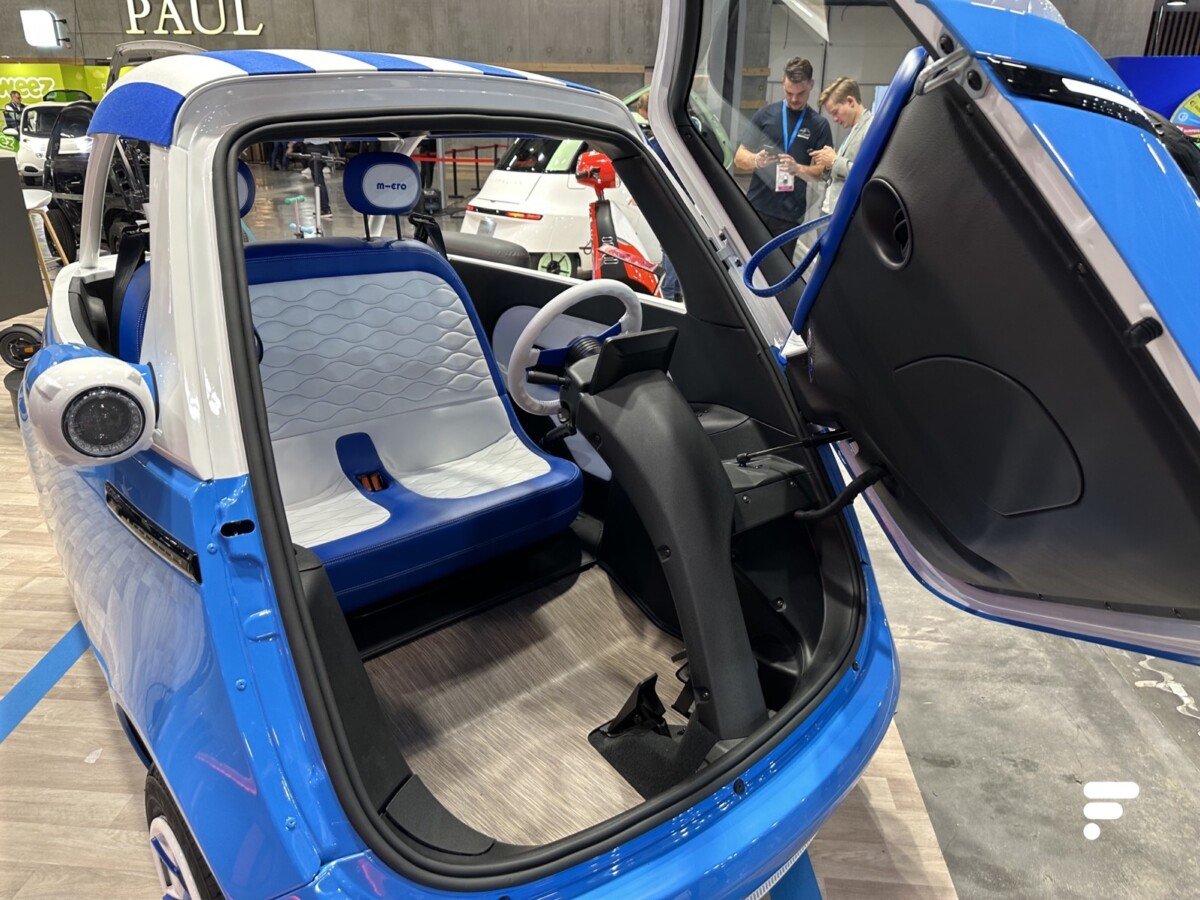 And, above all, the passengers are side by side. It’s much more pleasant. We were able to drive 30 minutes in the streets of Paris: despite the rain and the night, it seemed very reassuring to us. Thus, we were able to sneak in with impressive acceleration. A 0 to 50 km/h takes about 5 seconds, which makes it possible to get rid of any bad situation in town. Its narrow chassis allows it to almost follow scooters, between buses and SUVs. 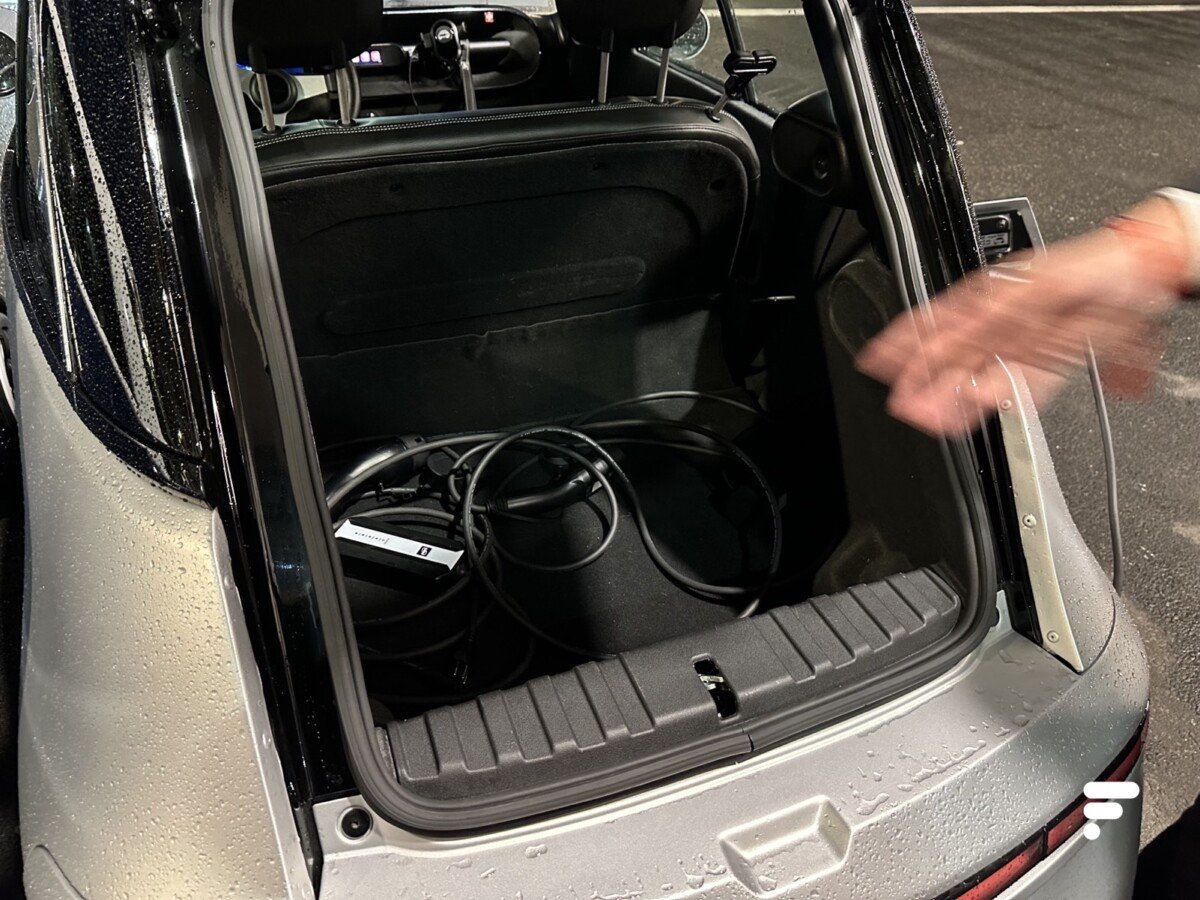 The trunk is spacious // Source: Ulrich for Frandroid

If it is not made to sneak like a two-wheeler, it turns ultra-short and parks in very small places. Braking is biting but as we do without the usual electronic crutches (ABS, ESP), it goes a bit in all directions when it comes to a sudden stop. Especially when it rains. 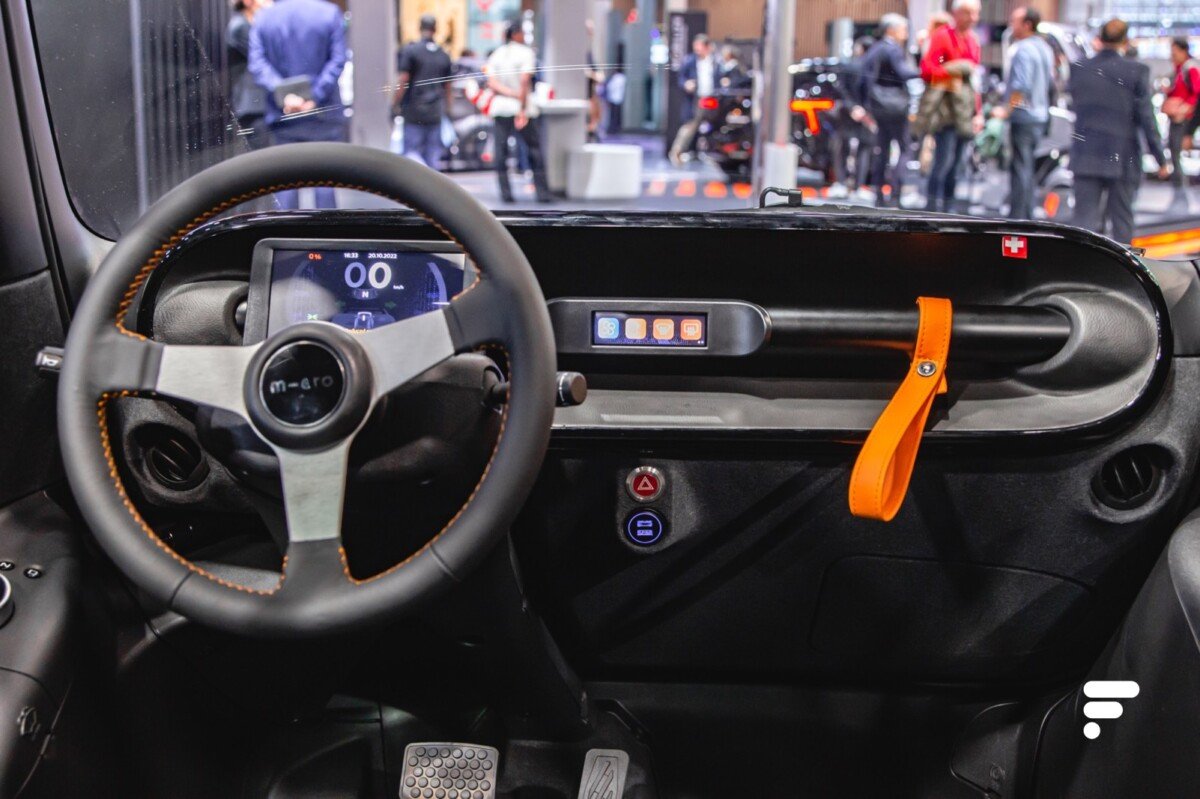 The interior of the Microlino // Source: Marie Lizak for Frandroid

Infotainment is basic, with an instrument display for the driver, and a mini screen that controls the ventilation (no air conditioning). No built-in speakers, but they have the idea (like the Ami) of creating a place for a cylindrical portable speaker. For GPS, you will have to rely on your smartphone to guide you. 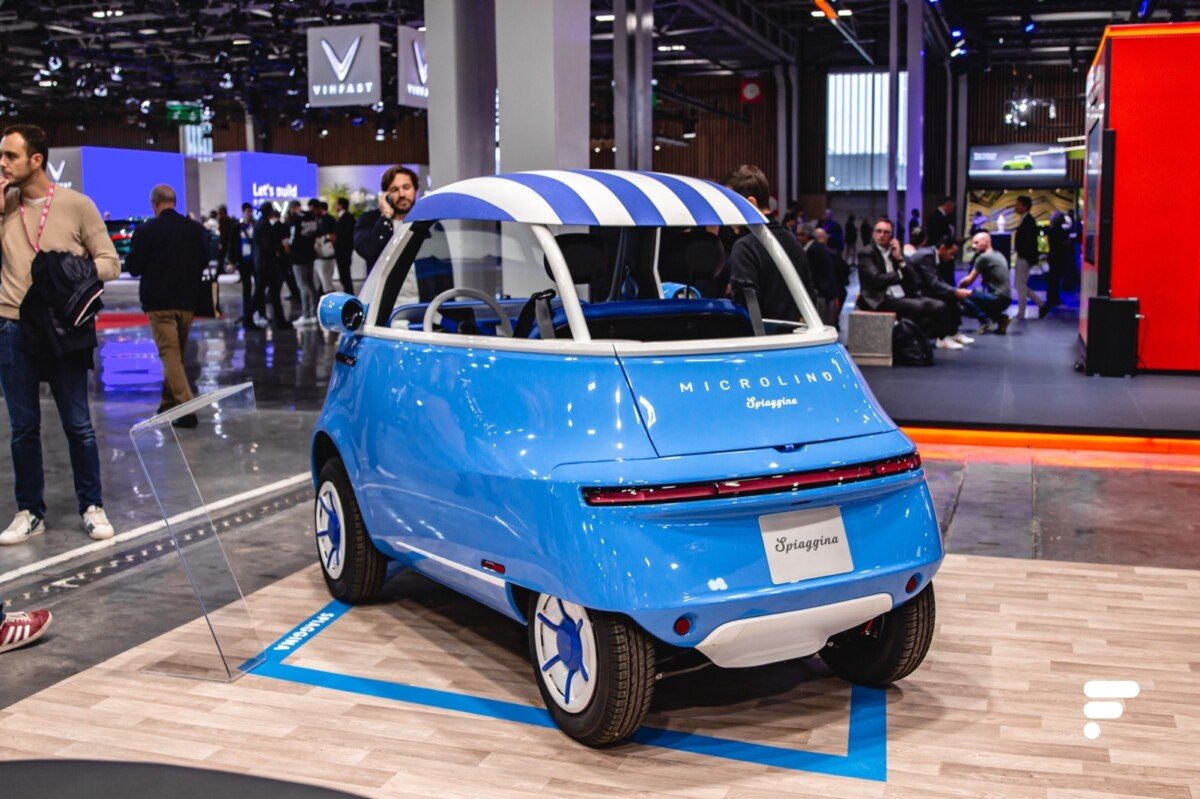 The version for the beach (in a country where it doesn’t rain) // Source: Marie Lizak for Frandroid

There is a Lite version, which is driven without a license accessible from the age of 14, but limited to 45 km/h. There is also the Spiaggina version, if you live in a country where it never rains. The “normal” Microlino offers a power of 12 kW (up to 90 km / h), with three possible battery sizes, for respectively 91, 177 and 230 km of autonomy. Prices start at around 16,000 euros, up to 21,000 euros for the Dolce version. The first Swiss customers have been delivered, France will be served from 2023.

The Microlino ultimately turns out to be a real success, at least with this first approach. Certainly much more expensive than a Citroën Ami, the main success of this project is to have succeeded in bringing this car to life. We can’t wait to test it thoroughly.

What future for microcars?

As you’ve probably seen, the Citroën Ami is a hit with some high school students. This shows that the microcar can replace a scooter, a bus or a bicycle. By offering more freedom, by offering ergonomics to the hair, while guaranteeing a certain safety to the passengers. However, traditional modes of transport, such as the bicycle, the bus or the metro, are undeniably more ecological than a car, even a miniature one. We evoke precisely this reflection in the last issue of the Survoltés podcast.

The microcar has everything to claim itself as the missing link between the scooter and the car. This object exclusively dedicated to micro-movements surprises and challenges. Ultimately, it may be a necessary step to banishing big cars from our city centers forever and beginning a transition to more pedestrian-friendly environments. 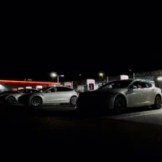 Let’s stop pitting thermal cars against electric cars. Electric cars are undeniably better than their thermal cousins ​​when it comes to their impact on the environment. But, is this really the solution to the current ecological crisis?
Read more

Aroged: The first paid pass for the “survivor” The Long Dark will be released on December 5

Couldn’t continue the match. Zubkov was injured in a meeting with Alexandria