Dwayne Johnson’s debut as a superhero was met with frosty reception from the world’s film press, and at the time of writing, the average rating on Rotten Tomatoes is 44%. Much of the criticism is directed at the utter lack of originality, depth, or really any kind of ambition. Total Film even went so far as to directly blame the film as a train wreck, and The Independent was not much kinder, calling it excruciatingly monotonous. However, there have been publications that have been friendlier in their choice of words, and Forbes found that in all its simplicity it was reminiscent of early MCU films. Read what a handful of critics have to say about Black Adam below.

Inverse: “Ultimately, the needs of the DC Universe meet the overwhelming star power of Dwayne Johnson, and the film ends up losing many of the entertaining qualities it could have had.”

The Independent: “It’s relentless but stubbornly monotonous – how I imagine it being to be picked up curbside by the FBI and have a cloth bag thrown over my head while the car I’m in goes through the Darkness drives to an unknown destination “What do you want?” “Where are we going?” “What do I have to do with this?” Don’t expect answers to any of the above.”

AV Club: “There’s not really much to stew about with Black Adam once you’ve left the theater, other than being a little amazed at how the story comments, but doesn’t comment, on the actual political situation in the Middle East.”

Total Film: “Johnson keeps his smoldering low and handles the show well enough. Digging through the rubble, there’s potential in Adam, even if his film is more of an extended, excessive introduction than a Batman Begins-esque slam-dunk. How odd Paraphrasing the unsurprising credit scene catches our attention. But the main question that remains frustratingly unresolved is can he start something new with it?”

Associated Press: “Director Jaume Collet-Serra and the design team do a great job in every department, but are let down by a derivative and baggy script by Adam Sztykiel, Rory Haines, and Sohrab Noshirvani that moves from one violent scene to the next like a video game. “

Vanity Fair: “There’s no point in denying the 270-pound wrestler in the room: Even within the realm of the superhero genre, this is an ephemeral film that lacks depth, originality, or narrative panache. Much like a McDonald’s hamburger technically food, Black Adam is technically a movie, and both can be enjoyable at times before you come and ask, “Why am I consuming this?”

Rolling Stone: “Unless you have entire multicharacter stories available on demand, you can get lost in the worldbuilding wilderness and wonder how so much of it fits together, who can do what, why certain sacrifices matter, and why you care should take care of these peripheral but supposedly important characters that take up so much screen time.”

The Wrap: “The idea of ​​introducing new heroes with powers first, origin later seems enticing on paper, but knowing nothing about the Justice Society and its members doesn’t make them particularly interesting adversaries for our anti-hero protagonist.”

The Hollywood Reporter: “Johnson creates a magnetic anti-hero, elusive and antisocial. He doesn’t fly as much, but tracks the skies; he swam opponents like the bundles of weightless CG pixels they are. And this passion project serves the character well and prepares takes him on adventures that one hopes will be less predictable than this one.”

Forbes: “Black Adam is a happily over-the-top action-fantasy tent pole. It has the mushy and pressureless joys of a New Line flick, even if it’s equipped with a WB-level budget. Like Doctor Strange 2, it reminded me of the early MCU movies (Iron Man, Thor, etc.) before the Marvel Cinematic Universe was anything but a single ambitious Hollywood franchise amidst other Hollywood franchises and non-IP blockbusters.

Screen International: “The latest installment in the DC Extended Universe too often succumbs to the conventions of its genre, but some convincing performances and director Jaume Collet-Serra’s exuberant B-movie flourishes prove to be sufficient compensation.”

Movie Web: “Black Adam gives the DCEU a bad A** with no moral qualms. If only the script lagged behind as much as our anti-hero. Dazzling action rescues the simple narrative; the result is a popcorn cinema extravaganza that fans delight in should.”

ScreenRant: “Though suffering from repetitive plot beats and thin characters, Black Adam is propelled by Johnson’s performance and promise of an exciting future.”

What do you expect from Black Adam and do you plan to see it? 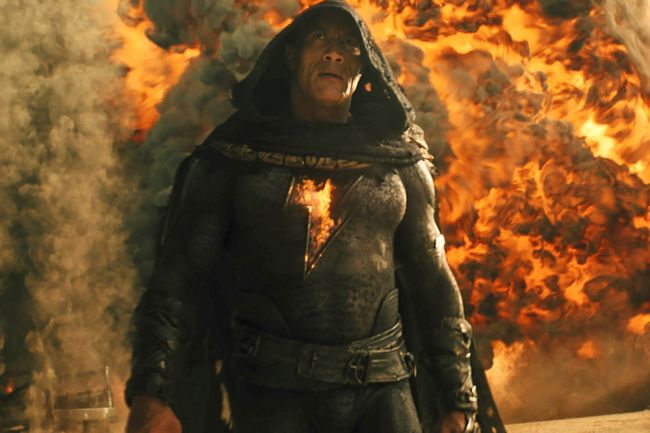 Resident Evil 4: a video compares the remake and the original, via the trailer of the October showcase

EU economy could grow by 2.8 trillion euros with Digital Transformation

Before the next Germany game: World Cup 2022 jersey at half price