“James Webb” captured the “knot” of galaxies from the young Universe

The James Webb Space Telescope (JWST) imaged a dense “knot” of at least three galaxies that formed around the quasar about 11.5 billion years ago – that is, just 2 billion years after the Big Bang. 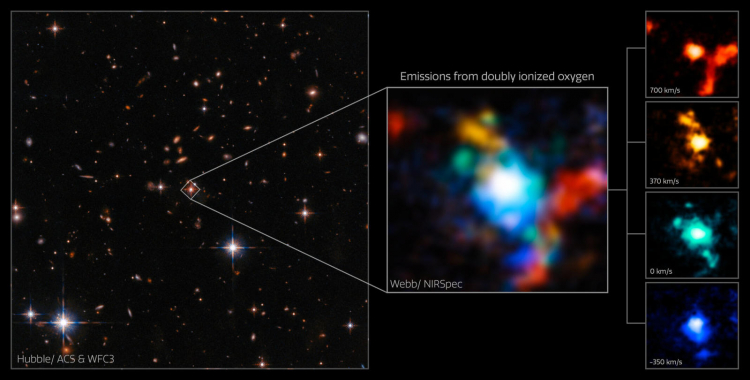 The device showed that in this part of the Universe there is one of the densest regions of the early formation of galaxies, which rotate around each other at speeds up to 700 km/s. The density of objects is extremely high, and lead researcher of the project Dominika Wylezalek from the University of Heidelberg (Germany) suggested that two “halos” of dark matter may also be present in this area. The extremely red quasar SDSS J165202.64+172852.3 located in the center of the node is unusual – this active galactic nucleus actively absorbs gas, but produces radiation in a much smaller part of the spectrum compared to “ordinary” quasars.

The resulting images once again illustrate the capabilities of the James Webb telescope: earlier this area was studied by the Hubble and Gemini North observatories – they detected the radiation of a quasar, but failed to identify more than one galaxy. Scientists still have much to learn about the formation of such clusters of galaxies and the influence of supermassive black holes on these processes. However, the data of the new space telescope can already shed light on many aspects related to the formation of the modern network of galaxies and the suppression of star formation processes by quasars. Scientists will continue to observe in this area: the data obtained by Hubble indicate that other galaxies can also rotate around this quasar.

Space strategy The Pegasus Expedition is out in early access

Musk again recalled the development of the Tesla electric car for $ 25,000 - it will be produced in millions of pieces

You don't want to miss this affordable retro e-bike - Aroged

RATE OF THE DAY. The main matches of the day and popular predictions for December 6