Publisher in Russia
Not

Scorn leaves as bad a first impression as it gets. You start, as it says in the description, “atmospheric adventure horror”, the screenshots of which you have admired for many years, and you begin to go through the introduction. And after a few minutes you solve the first puzzle, reminiscent of “tags”, with the movement of objects across the field with limited sizes. Moreover, no one explains what needs to be done in it and what kind of object to drag to the right point – you can guess for yourself.

The pointlessness of the first puzzle sets the tone for the entire game. The developers don’t bother explaining who we’re playing as or what our goal is, so it’s just a matter of moving forward and hoping to stumble upon an interactive object. There seems to be nothing wrong with this, adventures without words come out all the time and often collect a lot of positive feedback. However, they usually have more logic: either the world reacts more actively to your actions, or the narrative through the environment works. 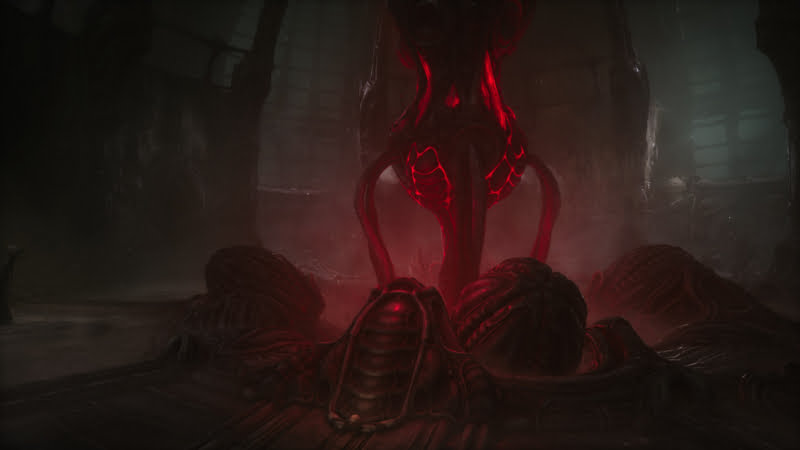 The buds, of course, are mechanical – there is no place for flora here.

In Scorn, for the most part, the environment is just for beauty. Locations in the spirit of works by Giger and Beksiński are breathtaking and surprise with meticulous detail, this is a real paradise for lovers of biomechanical creations/inventions/creatures – decide for yourself which category this or that object belongs to. If there are pieces of flesh somewhere, then they are sure to pulsate, and often also bleed, flooding the abandoned mechanisms, which also do not look that appetizing.

However, any beauty quickly becomes boring if there is nothing behind it, and Scorn is just that case. Without a plot and at least some explanation of what is happening, the game quickly turns into aimless walking from corner to corner. You see a corridor – go there. You see a fork – you go in one direction, stumble upon a dead end, turn around and try the other way. Then you find the mechanism and press the interaction button, not imagining what the character will do in a second. 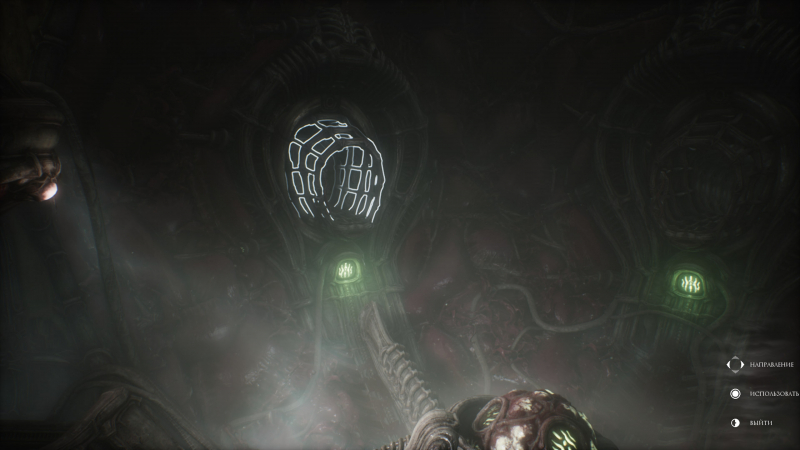 Not the most stylish interface at such moments stands out against the background of everything else, but these are already nit-picking

The gameplay quickly becomes annoying, because there are no clues, or at least veiled signs, and the corridors and rooms are repeated at times – it seems that you have already been in this place, but in reality this is a different room. It cannot be said that the logic in Scorn is completely absent – if you see a closed door, then somewhere you can open it, and then return to it. But half the time, you just wander around hoping to hit some button that will allow you to move on.

And it would be nice if the atmosphere saved the situation, but it’s a problem with it. Again, we recall the “atmospheric adventure horror” from the description – it really doesn’t smell like horror here. More often they try to stun with shock content: either the character will stick his hand into the pipe, which will implant something into him, or some creature will begin to pierce his stomach with sharp limbs. But when you don’t understand what is happening at all, then you don’t feel any emotions. Therefore, when we are shown the tails of fleeing monsters, as in some Alien, these attempts to scare are also unsuccessful. 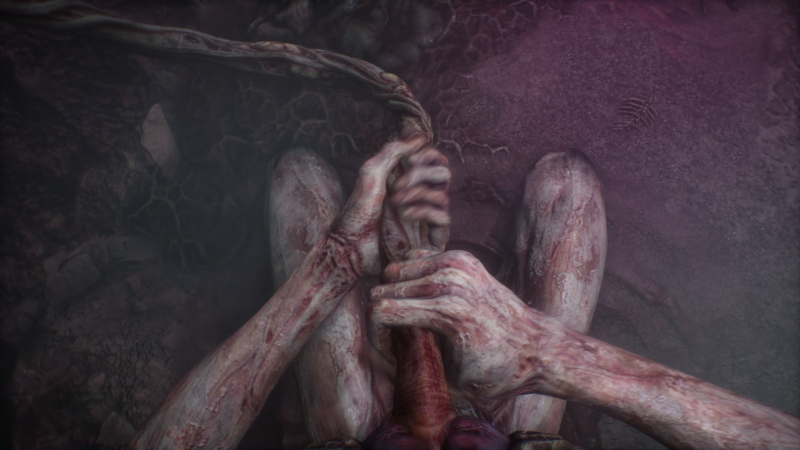 The main character is constantly uncomfortable

And so that life does not seem like honey at all, the gameplay is diluted with a combat system. First of all, you are given a pistol, which in terms of functionality is more like a gun from a toy store: instead of shooting, it fires a “tongue” for a short distance, causing minor damage to the target. If this somehow works against defenseless enemies, then you won’t defeat everyone else like that. Then a more impressive weapon appears, but the control does not get better, and it is problematic to find cartridges.

Therefore, skirmishes with monsters try to avoid. It’s hard to say whether it was intended or not, because the opponents sometimes block the path and do not allow you to pass along the corridor – you have to either lure them into the next room and run around, or allow yourself to be damaged, after which you manage to sneak past them. Enemies, in turn, do not want to feel sorry for the player – they either spit acid, or knock them down with a run. The first-aid kit saves, the existence of which you probably will not immediately guess, since the game again does not give hints. What’s funny is that the monsters completely ignore you if you’re busy solving a puzzle – they just scurry around and make sounds. 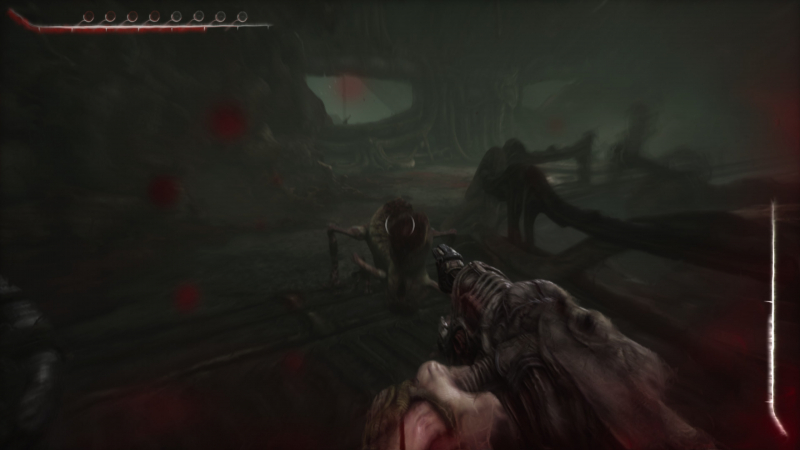 If chromatic aberration, which is sometimes conspicuous, is not enough for you, then blurring when taking damage is also added in fights

If we talk about the gameplay in general, then the puzzles are ultimately the least complaints, although they are not so hot. It’s not entirely clear why in such a game you spend time on puzzles with rotating rings and other similar entertainment, but these elements of Scorn are at least playable: there are no complaints about the management, nor is it necessary to fight. Perhaps they just look advantageous against the background of everything else.

The result turned out to be quite predictable – when the development of Scorn was delayed, and apart from beautiful screenshots, nothing was shown, the audience began to suspect that it was not worth waiting for something intelligible from the project. If a gorgeous picture and the desire to take screenshots at every turn is enough for you, Scorn can brighten up the evening. If you want something more meaningful, then there is no point in wasting time on a new product – at the end of the year, many more worthy games came out and will still be released.

narrative elements are completely absent; the promised horror in the game is not; the combat system is so bad that you avoid skirmishes with enemies; Structurally, the locations are boring, with repetitive elements and dull corridors.

The game looks just as great as the screenshots. I want to take pictures all the time.

Creepy ambient does not help Scorn become horror, but it is still pleasant to listen to it.

Beautiful picture and boring gameplay – if the cool visual component is not enough for you, the impressions will not be the most positive.

A mediocre adventure in a luxurious biomechanical setting that is desperately lacking in normal gameplay. Without it, all this beauty quickly falls apart and ceases to impress.

Mbappe's double and Messi's goal give PSG victory over Ajaccio

What if Call of Duty loses popularity? Question and answer between Microsoft and the CMA

Katarina ZAVATSKAYA: “I believe that next year I will play great”

Zotac, AXGaming and Colorful to Launch GeForce RTX 4090 and RTX 4080 Cards in White