We boarded the VinFast VF9: this electric SUV has little competition

Here is a large electric SUV. So, solution or aberration? At a time when energy has never cost so much, we can ask ourselves the question. Despite everything, the objective is to do better than the current situation. If there is a demand for 7-seater cars, an electric supply is needed to meet this demand. The VinFast VF9 is one of its offerings. We could see it at the Mondial de l’Automobile in Paris. 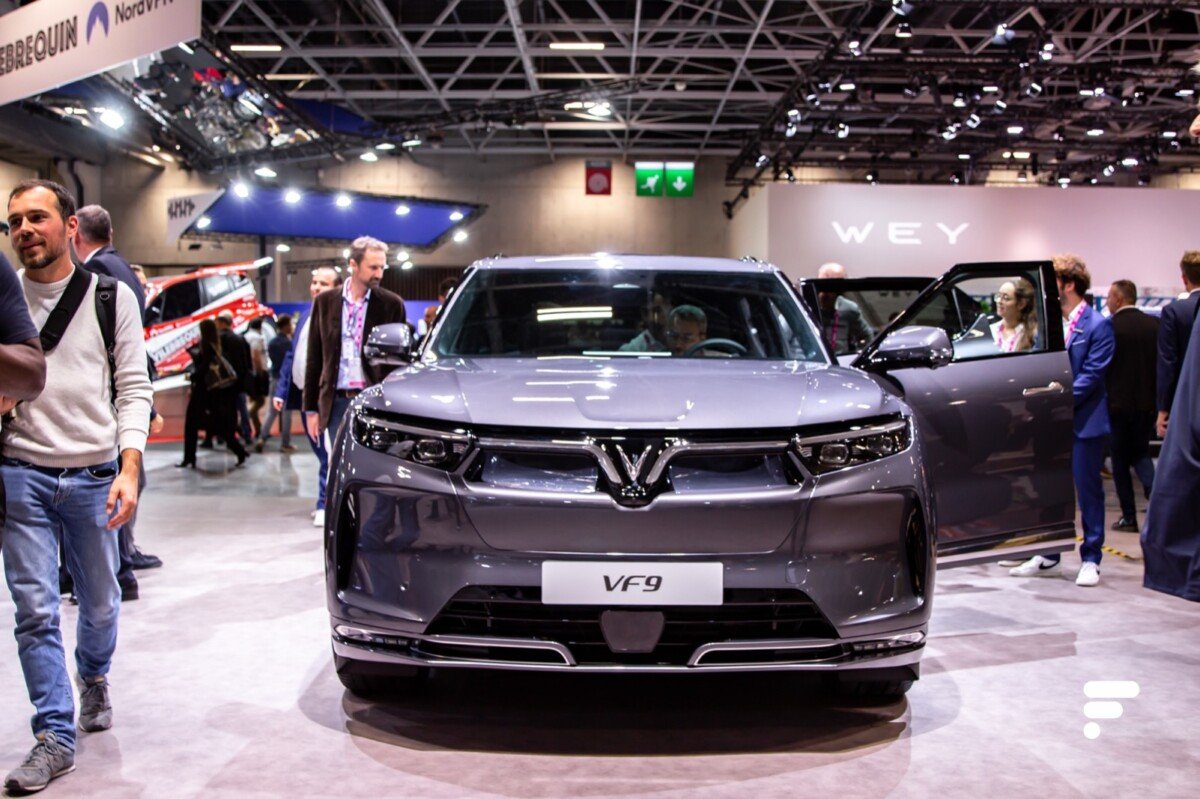 For its launch in France, VinFast is preparing the arrival of the VF8 and VF9. And, the very young Vietnamese brand has installed a large stand at the Mondial de l’Auto in Paris, it is located near the huge Renault stand. At the height of its ambition, a large equipped space, we were able to discover the four electric cars for its global launch: the VF8, which we already know since we were able to try it, the VF7, very promising for the European market, the VF6 and the VF9 in question here.

As we have seen in our analysis of the prices of the VF8 and VF9, the price dimension alone will not be VinFast’s main argument. So let’s take a look at what the VF9 has to offer us by sitting on board. Obviously, these are first impressions, waiting to hit the road with a production model. 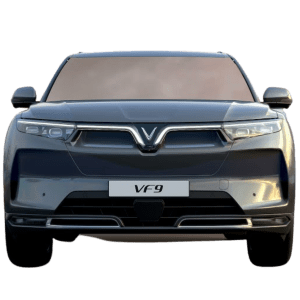 Let’s board the VF9

First observation, the VF9 is a huge 7-seater SUV, and the latter has very few competitors on the market. Among the 100% electric seven-seater SUVs available in France, there is in particular the Mercedes EQB, while waiting for the future Volvo EX90 and the new Tesla Model X. There are also the next Hyundai Ioniq 7 and Kia EV7 (the two share the same platform).

While urban SUVs and electric sedans are plentiful, large seven-passenger cars with good cargo capacity and spacious cabins powered exclusively by an electric motor are harder to find at the moment. It’s quite logical, these cars require large batteries, which increases the cost of the car and adds consumption issues (and therefore autonomy).

Like its little brother VF 8, the VF 9 will be available in two versions: Eco and Plus. Of course, the VF9 is significantly larger than its mid-size counterpart, measuring 5118mm long, 2070mm wide and 1696mm tall, with a wheelbase of 3150mm and ground clearance of 189. 2mm. In short, it’s a big SUV. 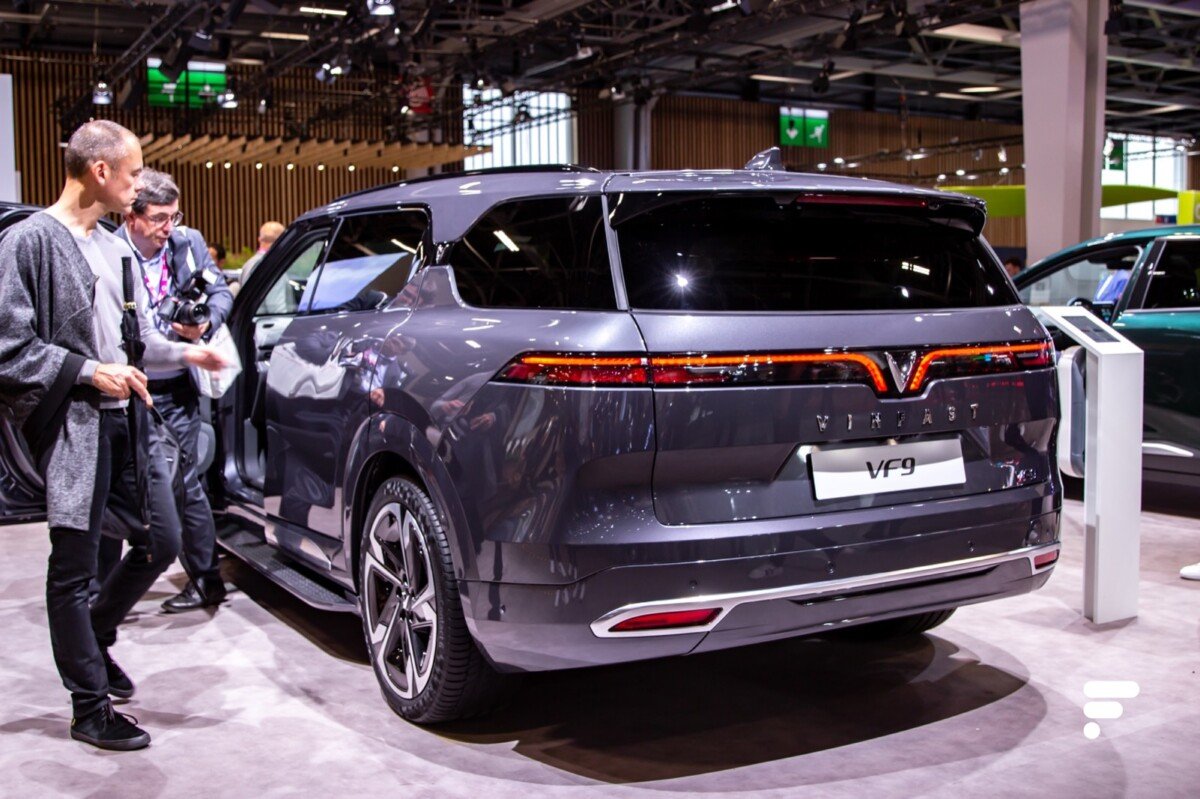 Let’s admit that with its American look, the VF9 has presence. It sports a bold design coupled with clean lines and massive, sporty wheels. Behind this design hides the Italian studio Pininfarina, as for the VF8. It’s neat, even if I have a clear preference for the design of the VF7, which comes to us from the Torino Design studio. 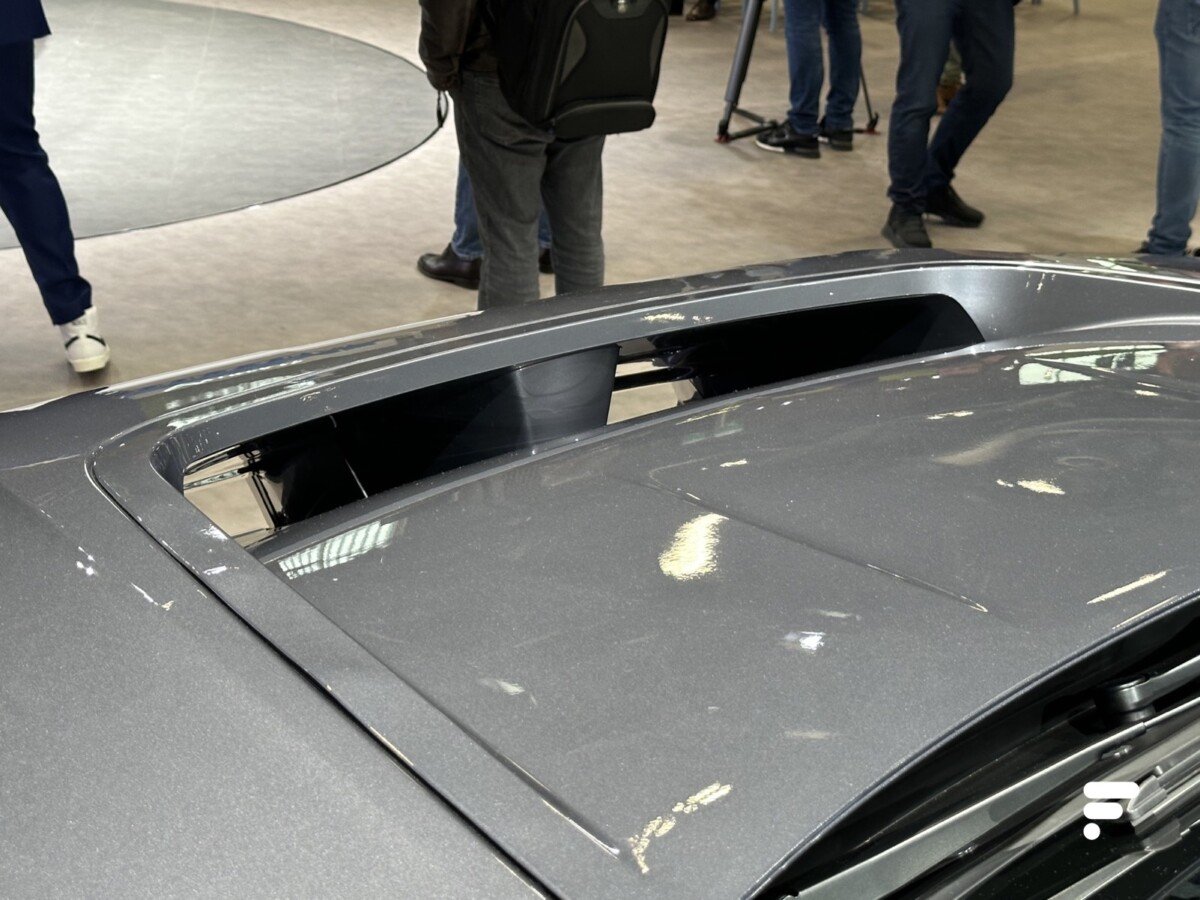 As you can see above, there is a ventilation system at the level of the hood, the latter is perforated, and moreover on the sides, there are gills which let the air pass. According to VinFast, these features are there to reduce the amount of air that rushes under the car, and therefore drags on the front grille. According to VinFast, the main function of this physical characteristic is therefore aerodynamics. This improves the vehicle’s high-speed performance, and above all could reduce its consumption. Nevertheless, why are they the only ones to do so? VinFast gave us another answer: it’s not interesting on smaller vehicles. The VF9 is finally very high with an imposing surface at the front, hence the efficiency of the addition of these gills. 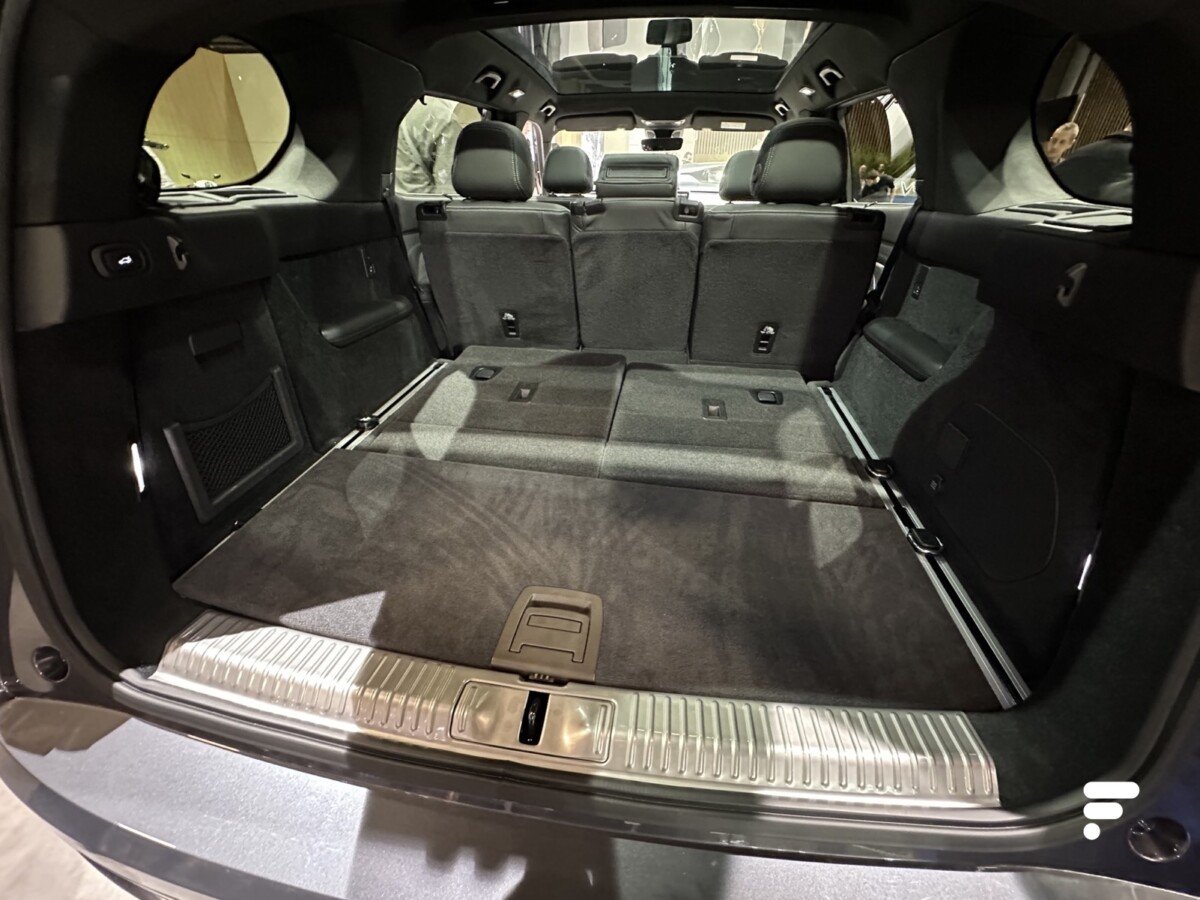 Like almost all car platforms with a dedicated electric platform, there is a rear under-trunk, which is usually used to store charging cables and other accessories, and a frunk (front trunk). In any case, the total storage space is substantial, even with the third row up. And, precisely, I tested the third row rear seats. They will be correct for two children, it will probably be more complicated for adults on long journeys. 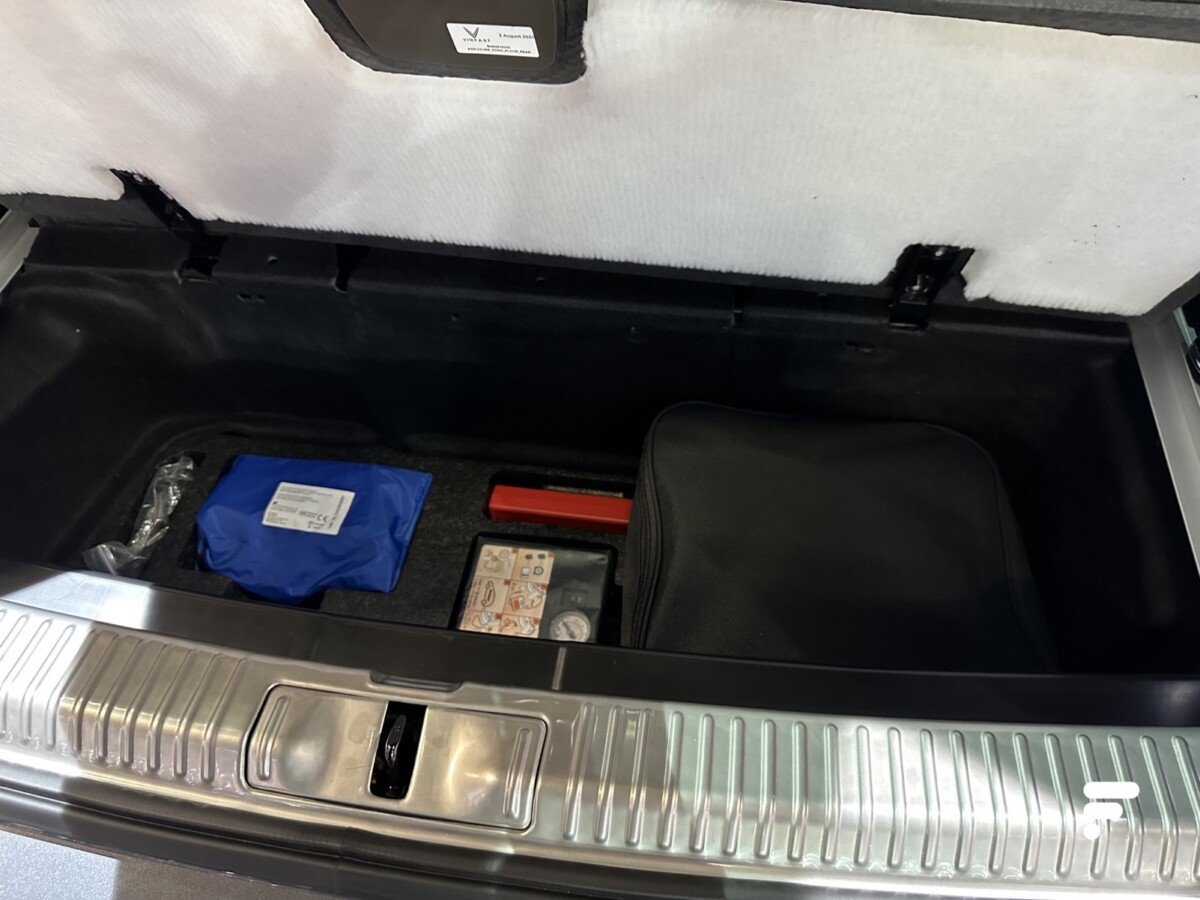 In the second row of seats, there is space, it’s comfortable. We would still have appreciated three real seats, like on the Peugeot 5008. Same observation at the front, with heated and ventilated seats. We feel good, and we appreciate the few gadget options, including the massage functions. We find, as on the VF8, a qualitative approach, it is neat and very promising. 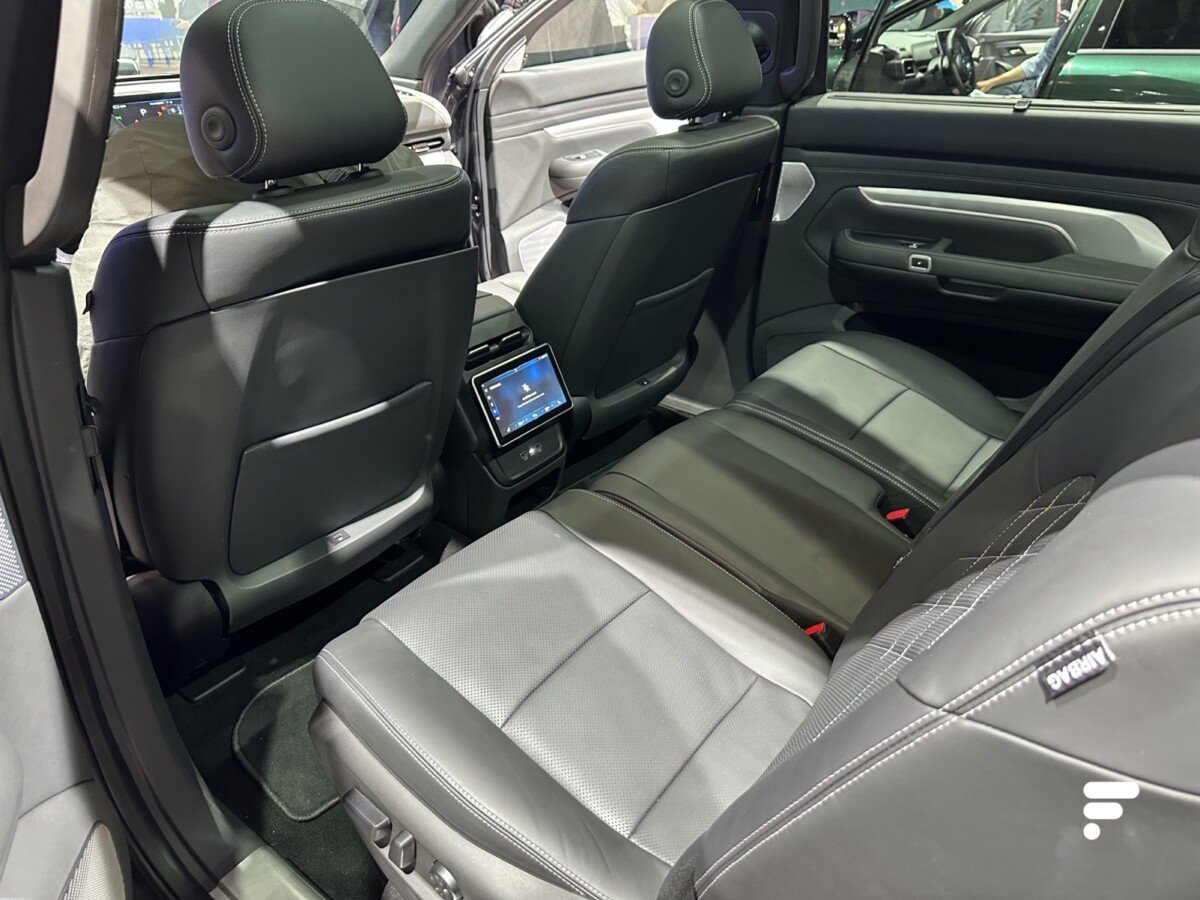 All models of VF9 are equipped with a large 15.6-inch infotainment screen and several driving assistance functions. As stated in our first test of the VF8, the experience is largely inspired by that of Tesla. The interface, the options, the menus… Everything is done so that we have nothing to envy the owners of a Tesla. 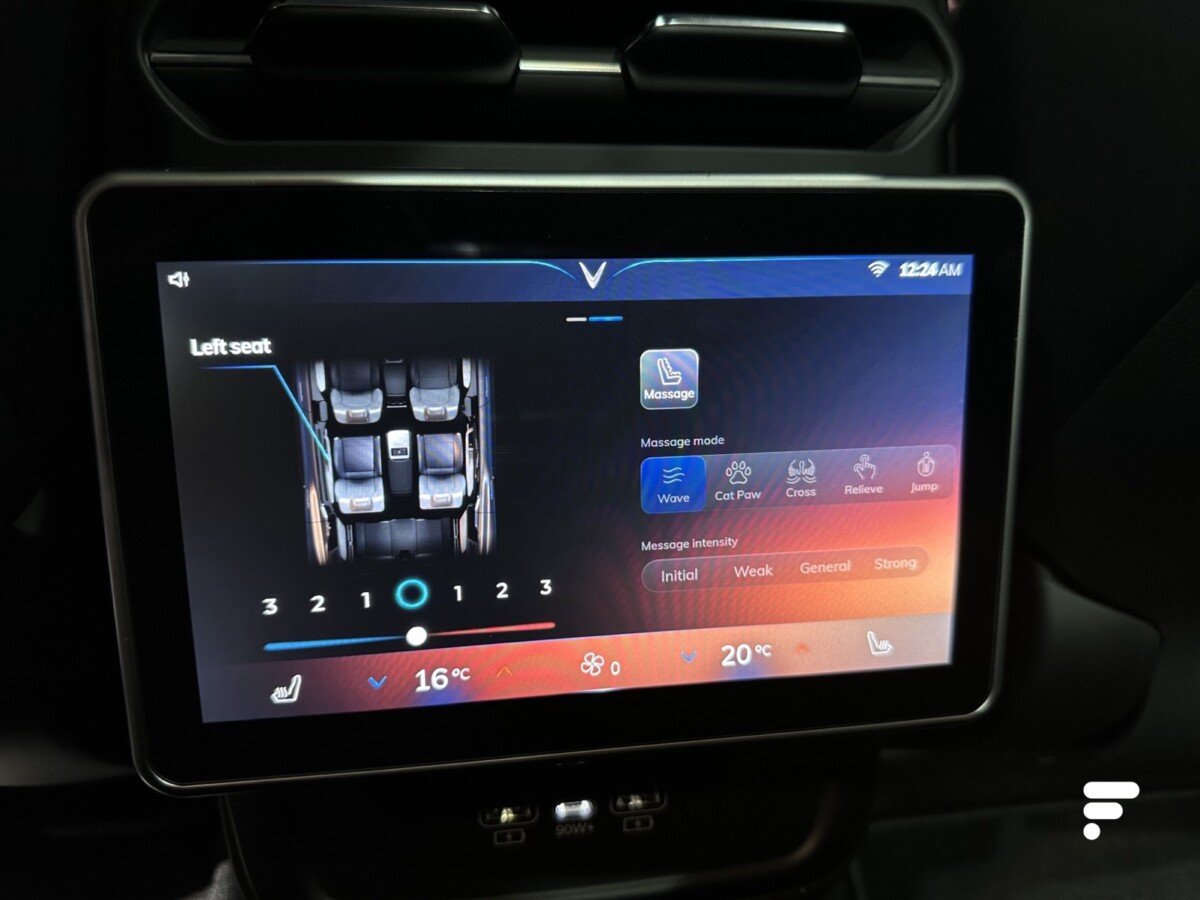 The screen on the back of the VinFast VF9 // Source: Ulrich for Frandroid

However, certainly as this is a pre-production model, we found the interface to be slower than when we last encountered a VinFast SUV. Let’s hope that the experience is optimized with the production models, at this price, we can’t accept having a software interface that drags. There were Android games installed by the way, this confirms that the underlying system is a fork of Android. The impression is the same as that of the VF8, it is once again promising. It is also impressive to see a newcomer do better than huge automotive groups, such as Stellantis (Peugeot, Open, Citroën, etc.) for example. Is it a vision problem? Of culture ? Investment? Who knows ? 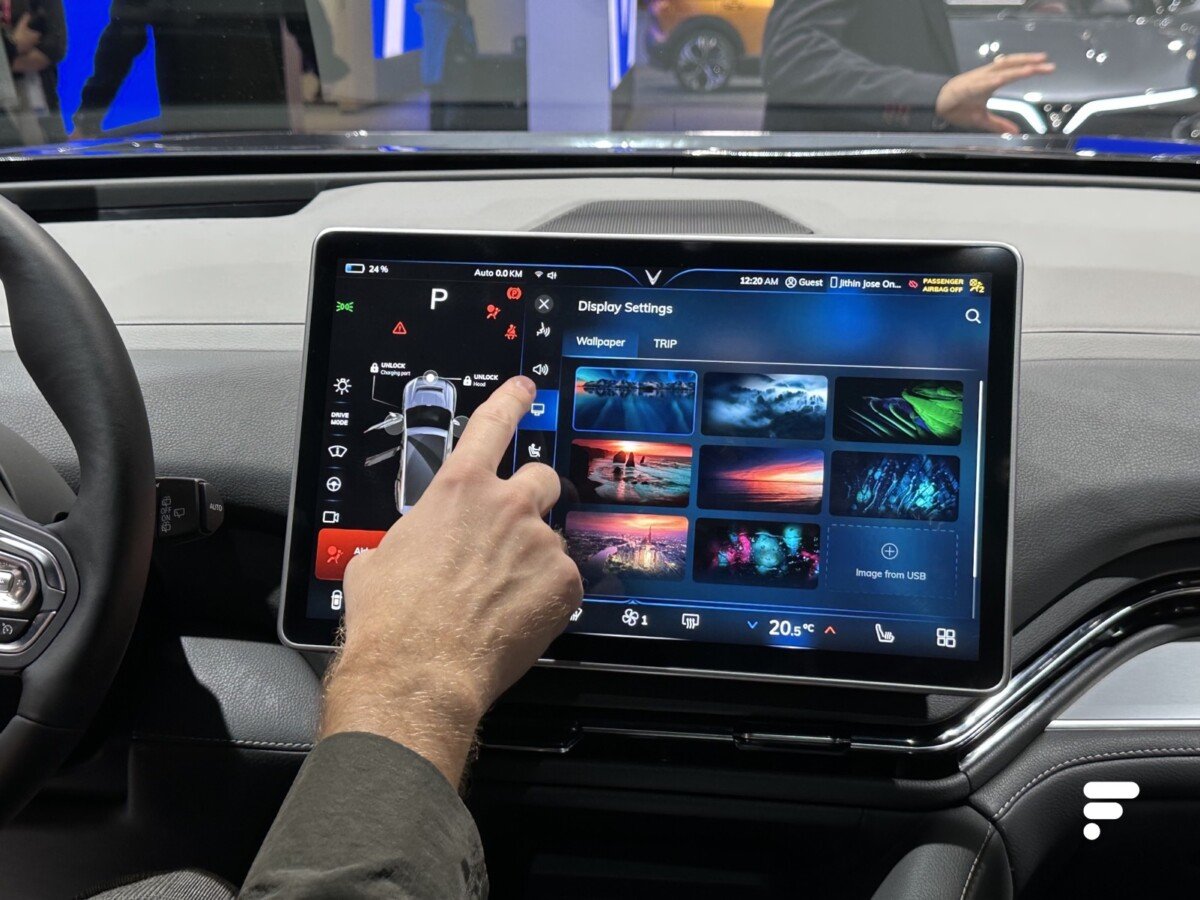 The screen at the front, with a head-up display in front of the driver // Source: Ulrich Rozier for Frandroid

The VinFast VF 9 is powered by 92 or 123 kWh lithium batteries, depending on the version. There is obviously an all-wheel drive, with two electric motors producing 402 horsepower, and 0 to 100 km/h in 6.5 seconds for a maximum speed of around 200 km/h. The table below shows the performance differences between the two versions, Eco and Plus, and also the two battery capacities offered.

Besides being an underdog in electric vehicles with a very ambitious goal in the face of fierce competition, what really sets VinFast apart is its battery subscription program, where customers can opt into a rental plan. monthly battery, with monthly payments of 150 euros per month. It’s an interesting proposition, and time will tell if it resonates with consumers.

Electric car: a fast charging station every 60 km, here is the map of the roads concerned

Evnia: Philips wants to get serious in Gaming!