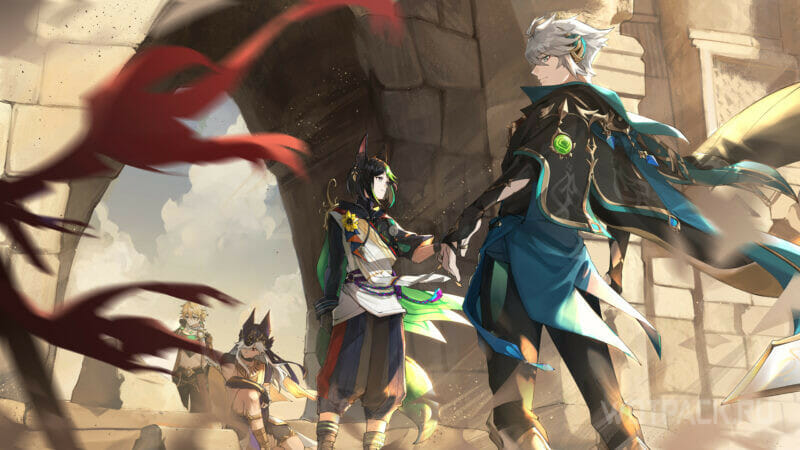 Dataminers reported an unprecedented data leak from the HoYoverse server: they got some files up to update 4.0, which should open the Fontaine Hydro region. Without exaggeration, we can say that this is the biggest leak in Genshin Impact in the history of the game.

Insiders have information about new characters, approximate composition of banners, talents of some heroes, events and expansion of territories in patches 3.3-4.0. 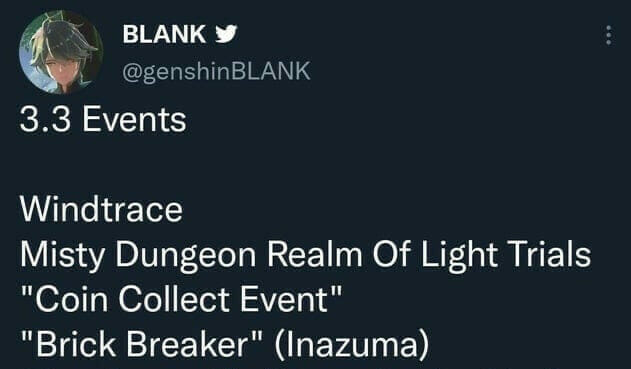 new task of the Archons. What it will be connected with is unknown, since the Sumeru story will end in update 3.2; a slight expansion of the territory is possible with the addition of an artifact dungeon; the card game Sacred Call of the Seven will finally be released; exit of the Wanderer (Scaramucci) and Faruzan;
the emergence of a future playable character as an NPC; The dream tree will be at level 30; the release of weapons for Scaramucci and event equipment; events: hide and seek, foggy dungeon, Brickbreaker. Which one will be the main one is still unknown. 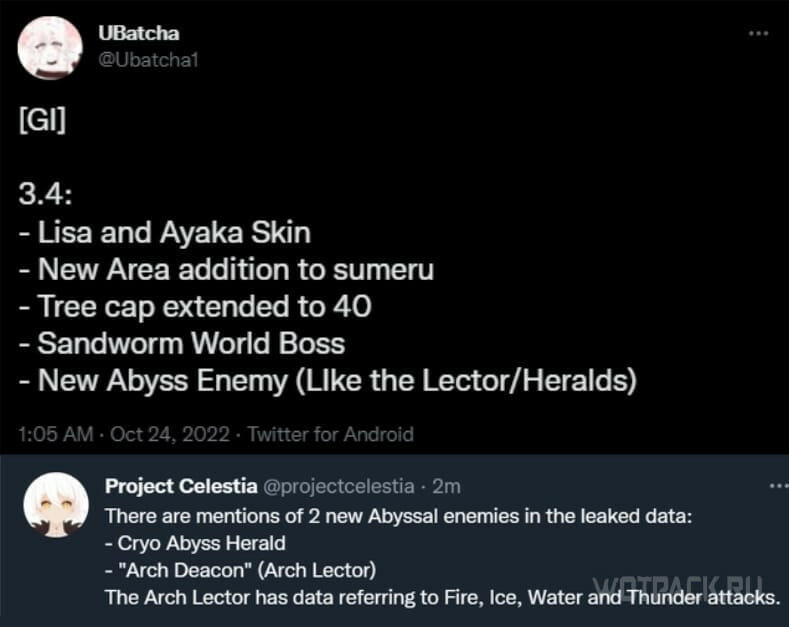 Version 3.4 Coming out around January 18th:

a new area north of the desert with a hurricane; exit of al-Haytham and Yao Yao; new one-handed weapons from the same series as the Hunting Trail and Dreaming of a Thousand Nights; skins for Lisa and Ayaka; The dream tree has been upgraded to level 40; world boss Sandworm, similar to Ruins Serpent; Sand Serpent event; new enemies from the Abyss: Cryo Heralds and the Arch Lector of the Abyss, who owns four elements; new desert enemies: Fire scorpion and Green chrysopelia (snake) and animals Anemo snake, Electro scorpion, Pyro vulture. in 3.4 or 3.6 there will be another boss in Jasha Chamshida cave, similar to Marana from Aranar quests, and a third huge ruin golem. 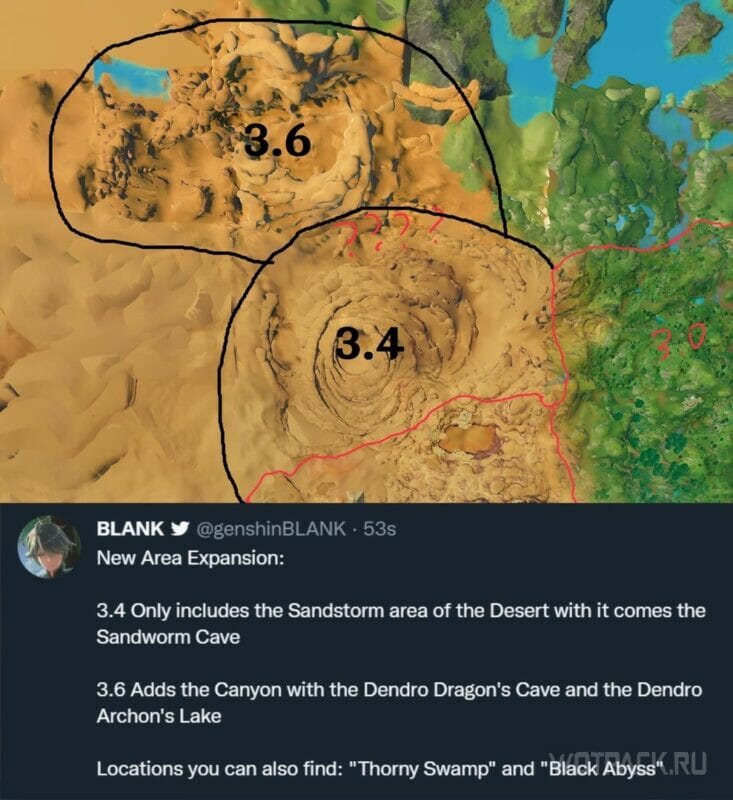 a new area further north of the desert, with Lake Archon, a swamp, and the “Abyss”. Perhaps they are near Qiaoying Village; the entry of Bai Zhu and a new hero (possibly Kaveh); Meeting with Layla; new task of the Archons; new weekly boss Dendro dragon or snake, can summon mobs “seed of Arjuna, Ashura and Karna”; The dream tree will be upgraded to level 50; new common enemies: Anemo and Hydro roaming hilichurls, sacred versions of desert animals: Hydro crocodile (like Geo in one of the deserters) and Dendro tiger.

About version 3.7 didn’t leak anything. 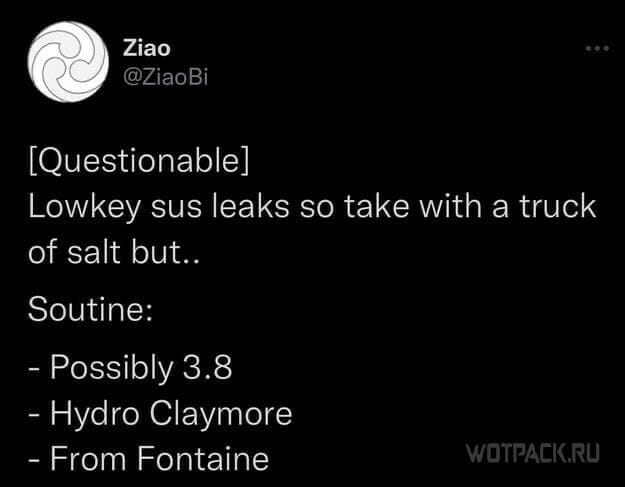 Version 3.9 not yet planned and most likely will be skipped.

Patch 4.0 will be released no earlier than August 16: 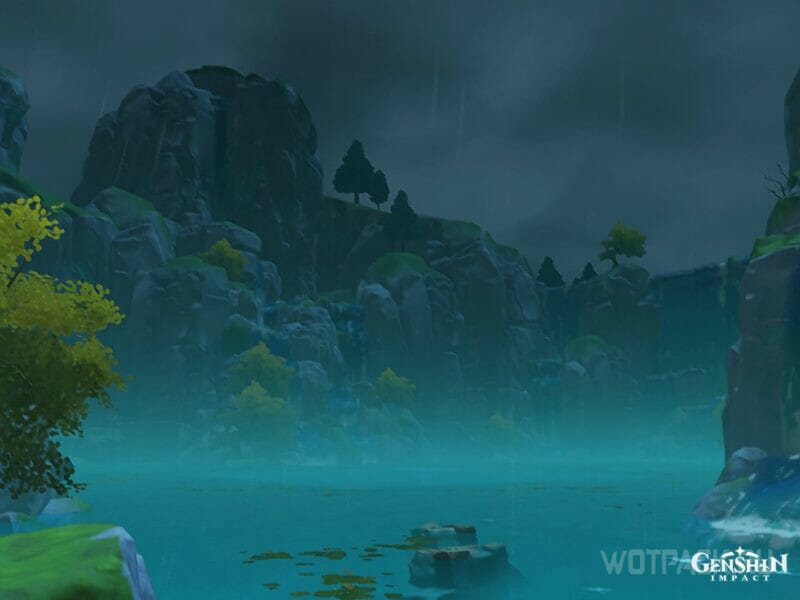 Read about patch 3.3-3.6 banners, future hero skills and new equipment in special news. Below we will analyze the general information on updates.

Despite the fact that this is data from the server, everything can change on dates. Share your thoughts on future content in comments and stay tuned for Genshin Impact news on our website.

Warframe: Cross-platform play for consoles and PC has arrived

Daniil Sikan - about Dynamo: "They just have a black streak, everything will be fine"

China plans to build a 43.3 GW offshore wind farm, enough to power all of Norway

“What is it?” — Soon the announcement of a new add-on for Far Cry 6

Fallout 4, this mod transports the spooky atmosphere of Silent Hill to the Commonwealth

Marvel’s Avengers 5 & 6: Details of the story have already been leaked!