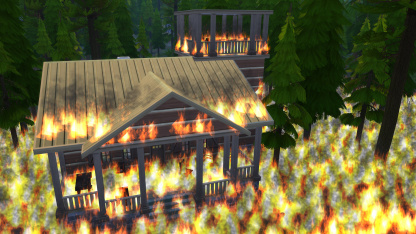 Complaints about technical problems with The Sims 4. The game has always been famous for its abundance of bugs, but since the release of the latest update, they have become truly catastrophic: players are overcome by fires. As fans of The Sims 4 say, the latest patch broke the cooking system: Sims now light up stoves during cooking, even if all skills are at maximum , the stove has been completely upgraded, and they make sandwiches. But, in addition, spontaneous combustion of other furniture, up to toilets, showers, chairs and beds, has become more frequent. Fires not only cause property damage, they unsettle Sims for a long time, and sometimes lead to their death. So, until the developers fix the fire system, players are forced to put out the fire with cheats or use mods like No More House Fires. Players also note that the patch affected the artificial intelligence of Sims. Without “manual” control, they increasingly start scandals and show aggression even towards their closest ones. But they can sit quietly on a burning chair. Meanwhile, the developers admitted their mistakes and promisedthat will do better. True, we are talking about the fact that during the summit Behind The Sims the category of black players was underrepresented and their impact on the game and its community was completely not reflected. More on Gambling The authors of Sniper: Ghost Warrior create a tactical multiplayer shooter Laura Bailey does not mind returning to the role of Abby from The Last of Us Part II

The AirPods Max wireless headphones are much cheaper in refurbished