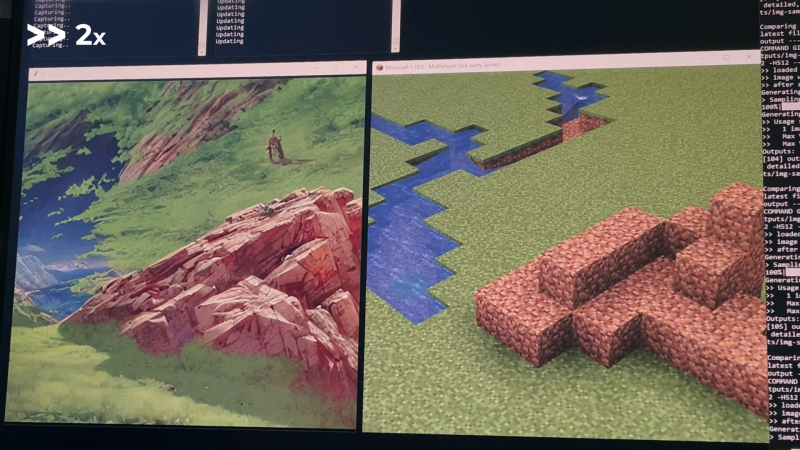 This is probably one of the best uses for AI image generators. Basically, it uses a combination of Minecraft screenshots and text prompts to create highly detailed images every time the user makes changes to their design in the Minecraft game world.

Sean Simon, better known as ThoseSixFaces (or Lozmosis on Reddit), posted a video yesterday showing a sped up version of their scripts running in real time as they fiddled with the game.

The script works by taking screenshots at a certain angle during the game, resizing or cropping them to 512×512 pixels and saving them in a folder. Each frame is created “at a fixed interval or every time the player places/removes a block”. Using Sean’s modified version of InvokeAI, the model then “selects the last image in the folder and outputs the Stable Diffusion image”. Then another script renders the rendered image using tkinter.

Stable Diffusion is the main thing that translates every frame into great AI-generated images, however, as Sean explains, “the denoising happens at a random value between 0.47-0.5”. So while Sean can use queries to nudge the AI ​​in the right direction with image2image, there is still a bit of ambiguity in how random the generated results can be.

This process currently involves running multiple scripts, although Sean is “very eager to compress it all into one script”.

At the same time, one of the Reddit commenters jokingly suggested to Sean the reverse process, in which the AI ​​would “turn art into minecraft.”

Unfortunately, Sean’s scripts are not yet available for download from Github, but stay tuned for their updates. Twitter.

We recently saw Stable Diffusion being used in VR, with CEO Midjourney suggesting future consoles will have “a giant AI chip and all games will be dreams.” This Minecraft project is another addition to the exciting AI-driven storytelling that is emerging in the gaming realm right now.