In the scramble of the stores for PC games, Steam is still ahead. Another juicy record was broken and once again shows the supremacy of Valve’s store.

Steam has been around since 2003, almost 20 years, and since then the store created by Valve has grown continuously. And now Steam has broken another record. It was not until 2020, with the start of the corona pandemic, that Steam received a huge boost and reported a record of 20 million players logged in at the same time. But this number has now been pulverized again. 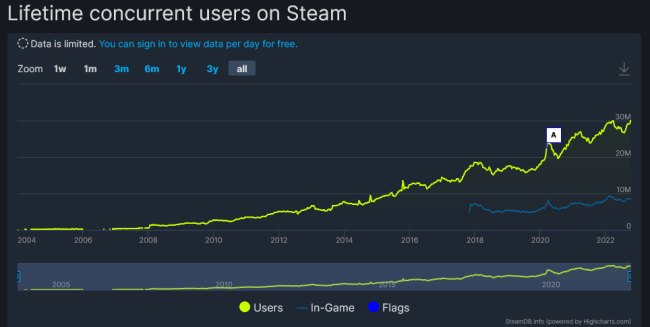 Over the weekend, Steam hit 30 million players who logged into the service at the same time. A whopping 30,032,005 users were registered. Not so very little. However, this does not mean that so many games were played at the same time, because it is only about the logged-in users and this is the case for some when the PC is started, provided that autostart is activated in Steam.

The number of simultaneous players is a whole lot lower, but at over 8.5 million it is not to be despised. The perennial favorites there are well known: as usual, multiplayer titles such as CS:GO, Dota 2, PUBG, Lost Ark and Apex Legends are at the top.

Valve has finally revised the completely outdated Steam app and integrated numerous new features and the video shows you what it looks like now.

Apple M2 "Extreme": we have more information on the characteristics of Apple's super-powerful chip

VIDEO. Zawatskaya is actively preparing in France for the match against Japan