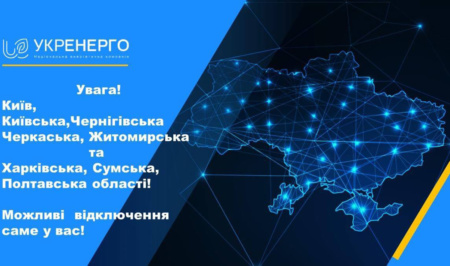 In connection with Saturday’s massive shelling of energy infrastructure facilities, a significant part of the electrical equipment is in urgent need of repair. Ukrenergo is forced to introduce a temporary controlled limitation of electricity consumption in six regions and Kyiv to reduce the load on the network and ensure maintenance work.

To support the stable operation of the energy system, the Ukrenergo Dispatch Center is forced to introduce a temporary controlled limitation of electricity consumption in Kharkiv, Poltava, Sumy regions.

The greatest volume of restrictions will be applied in Kyiv and Kyiv, Chernihiv, Cherkasy, Zhytomyr regions.

This will help reduce the load on the power grid and give power engineers time to repair equipment damaged by terrorist attacks.

Keep your phones charged and relay information to those who don’t use social media. Remember that your energy savings can help you avoid forced shutdowns.”

We remind you that on Saturday, October 22, Russian invaders carried out a massive rocket attack on Ukraine. At least 10 strategic aviation aircraft fired 17 X-101 (X-555) missiles. Also, the Russian Black Sea Fleet fired 16 Kalibr missiles. The consequences of the shelling may exceed the results of the first attack, which occurred on October 10 and in the following days, when 30% of the country’s energy generating capacity was destroyed.

Windows: Microsoft is working on a practical tool, but full of ads for its products

PLAY welcomes Yoshitaka Amano: the Japanese author at the exhibition at the Reggia di Venaria