After playing through the intro quests after arriving on the Dragon Isles, you can start directly with the story campaign – at the same time as the various side quests. The second chapter of the Dragonflight campaign on the Awakening Coast, In Defense of Life, takes you to the Life-Binder Alexstrasza. Your task will be to ensure the survival of the dragon offspring. One of the things you’ll learn early in this chapter is dragon riding – a must-have tool before general flying becomes available in a later patch.

The release of WoW: Dragonflight is on November 29th, 2022, the first part of the pre-patch starts on October 26th – here is all the feature information!

The WoW developers have also included some Easter Eggs in Dragonflight, including one for the Karen meme lol

In the following picture gallery you can see the complete 2nd chapter of the Dragonflight story campaign with all quests and NPC dialogues (see the chat box on the bottom left), which contain a lot of story details. Warning, spoilers!

WoW Dragonflight: In Defense of Life – Chapter 2 of the Story Campaign (1) [Quelle: Buffed]

In Defense of Life – Story Summary

Below you can read the original lore summary from the quest log. The first chapter of the Awakening Coast campaign, Dragons Under Pressure, can be found here.

Majordomo Selistra flew you and the rescued egg quickly to Queen Alexstrasza at the Ruby Lifeshrine.

At the life shrine, you learned about the goals and culture of the red dragonflight, which sustains life and cares for the eggs of all dragonflights.

You also became acquainted with the Dragon Riders, dragons, and mortals who explore the wonders of the Dragon Isles together. During training with them, you met your first dragon companion, a renewed proto-drake, and soared into the skies in style.

The peaceful reconnaissance flight was cut short when Raszageth, the leader of the primalists, called for an attack on the Lifeshrine. Queen Alexstrasza fought off Raszageth between the clouds while Majordomo Selistra and the rest of the dragonflight defended their home on the ground.

Together with Majordomo Selistra, you were able to repel the primalists and rescue all stolen dragon eggs from the primalist enclave. However, Queen Alexstrasza had been wounded trying to push Raszageth back at the Shrine of Life.

Having aided Alexstrasza in the fight against Raszageth, Wrathion demanded that Alexstrasza and her kin assist him in reclaiming Obsidian Citadel, the ancient home of the black dragonflight. However, Alexstrasza asked for his patience as she had to take care of the rescued dragon eggs first. 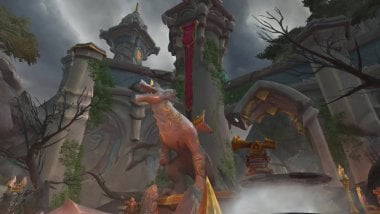 Structure of the campaign in Dragonflight

Currently, you cannot reach level 70 in the Dragonflight Beta simply by completing the campaign. So you also have to play dungeons and/or complete side quests.

The first gate takes place in the Azure Mountains, where you must be level 66 to continue the Dragonflight campaign. However, you’re safe if you complete at least 3 dungeons at level 60 and above, and you don’t have to do side quests.

Uncharted compilation has the weakest start among Sony ports on PC

God of War Ragnarok "spoilers" begin to spread across the Web

The Last of Us Part II: Abby actress would "definitely" reprise her role