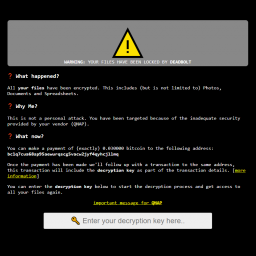 The Dutch police, which is probably one of the most active and dedicated when it comes to the fight against cybercrime, cheated ransomware to the Deadbolt gang to hand over the decryption keys, giving victims the opportunity to recover encrypted files without paying a ransom. Using these keys, victims can now unlock files for free.

With the help of the cyber security firm RESPONDER.NU, the police obtained more than 150 decryption keys from the Deadbolt ransomware group.

According to police officials, they practically stole the decryption keys from the criminal group. Police teams of the cybercrime department used to transfer funds in bitcoins to the extortionists as ransom, but as soon as the criminals gave them the decryption key, the funds would be withdrawn.

In a press release, police said Deadbolt ransomware attacks were mostly focused on NAS devices. The gang encrypted over 20,000 QNAP and Asustor devices, with victims located all over the world. About a thousand victims have been identified in the Netherlands alone.

Dutch police say they rescued 90% of those who reported being attacked by this ransomware group and urged other victims to contact them and get their data back.

Other agencies that assisted in this operation were Europol, the Office of the Public Prosecutor, the French National Police and the French Gendarmerie.

Matejs Jaspers from the Dutch National Police’s cybercrime team said it is imperative to report such crimes and trust the police and not cybercriminals.

“This action clearly shows that reporting helps: victims who report ransomware are given priority.” Their keys were among the first we received before the ransomware group panicked.”

#ArogedOffreMoi an Amazon Kindle to read lots of books

WoW: Legendaries do drop in Dragonflight… although not intentionally

Uniform charging cables in the EU clear the last hurdle

PlayStation Stars: how to complete new campaigns and unlock rewards

General life risk: If there is danger when parking the car

Google: the Pixel 7a is revealed and it is likely to hit hard