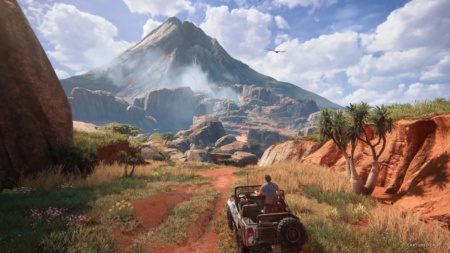 Sony has a steadfast strategy for releasing PlayStation exclusives on PC (head of PlayStation Studios Herman Hulst recently confirmed that PlayStation exclusives will be coming to PC at least a year after release), and not all of them live up to Sony’s beliefs. For example, the Uncharted: Legacy of Thieves Collection with updated Uncharted 4: A Thief’s End and Uncharted Lost Legacy started much worse than previous games and remains Sony’s weakest release in 2022. Moving on to specific numbers, the Uncharted: Legacy of Thieves Collection came out on PC on October 19 – not only on Steam, but also on the Epic Games Store. This is Sony’s fifth release for PC. At the same time, a week later, the peak number of Uncharted 4 players on Steam did not rise above 11 thousand, which is the worst indicator among PlayStation exclusives on PC. 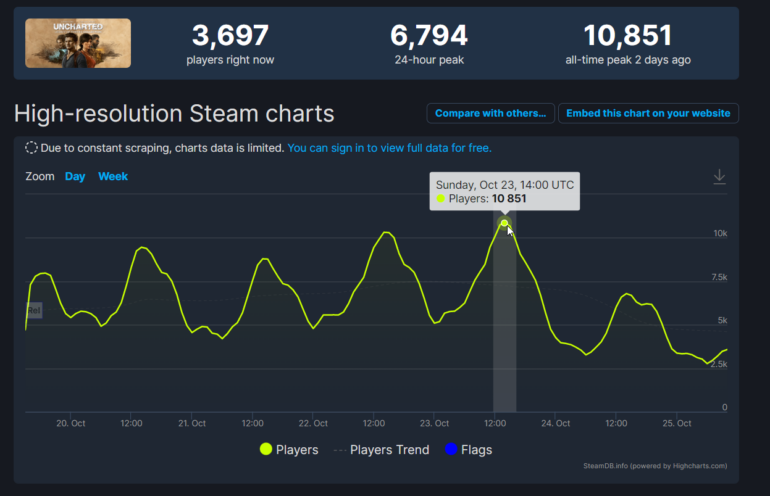 The disastrous launch of Uncharted 4, first released on PlayStation 4 in 2016, contrasts particularly sharply with the previous successful release of Marvel’s Spider-Man – the 2018 PlayStation exclusive posted the second-best result on PC behind God of War, which still holds the lead with peak online 73+ thousand players. 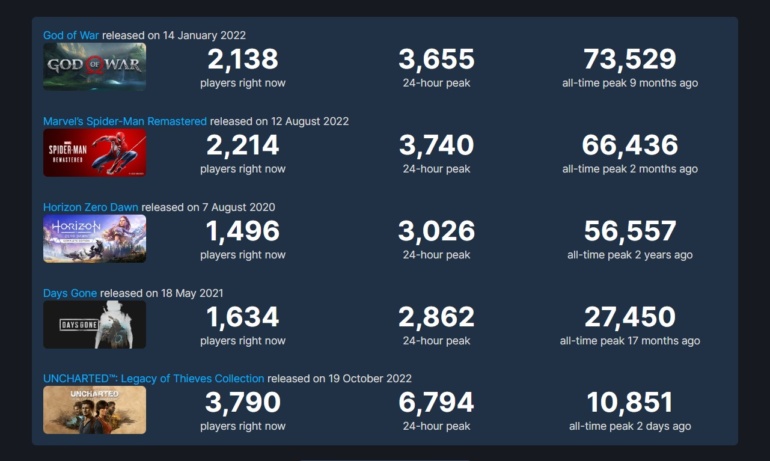 Due to the failure of Uncharted 4, we can assume that Sony chose not the best time (October had several high-profile AAA releases, in particular Gotham Knights and Modern Warfare II). Also, one cannot completely reject the version that without the original trilogy (Naughty Dog believes that the first three Uncharted are visually outdated in order to release them on a PC), the fourth part turned out to be tritely uninteresting to players.

Next up on Sony’s schedule is Spider-Man: Miles Morales, a spin-off of the main game centered on Miles Morales, a close friend of Peter Parker’s. The release is scheduled for November 18th. At a recent business conference with investors, PlayStation CEO Jim Ryan revealed that Sony expects to raise $300 million in PC game sales this year.

Indiana Jones: According to Todd Howard a