Age of Mythology Retold announced: This is what fans have been waiting for!

The fans’ complaints have been heard: Age of Mythology is finally getting its well-deserved remaster! Just in time for the 25th anniversary of the Age of Empires series, Microsoft announces the new edition of the strategy classic. The original was released by Ensemble Studios in 2002 and still has many fans to this day. The announcement doesn’t really come as a surprise, after all, Microsoft had already published successful new editions of the first three Age of Empires games, of which Age of Empires 2: Definitive Edition in particular was a great success. Age of Mythology Retold is set to take a similar stance, so don’t expect a full remake. There is no concrete information yet, but in the announcement the team promises improved graphics and new features to “raise the grace of the original to a new level.” We suspect behind this, above all, improvements to the controls or the multiplayer features. Also on our wish list are heavily revised cutscenes, since the campaign is still a lot of fun today, but the dialogue scenes before and after the missions are quite lengthy from today’s perspective – a more modern production could do a lot here.

Age of Mythology Retold is currently in development and has no release date yet. So don’t expect the game until 2023 at the earliest. Until then, you can while away the time with Age of Mythology: Extended Edition. The new edition of the cult game was released in 2014 and brought new graphic features, including more beautiful water, changing the time of day, improved lighting and finer shadows. The Extended Edition met with little approval when it was released, but has been steadily improved over time.

What made Age of Mythology so good? 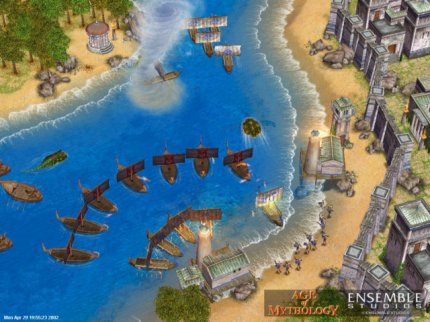 This is what Age of Mythology looked like in 2002. The new edition should be graphically improved. Source: Microsoft The original Age of Mythology was released in 2002 and at the time was neck and neck with Warcraft 3, which was also excellent. Age of Mythology was based heavily on the concept of Age of Empires 2, but this time it was to a genuine fantasy setting. This time you not only control real Greek, Egyptian and Viking units, but also impressive mythical creatures such as cyclops, chimeras or huge scarabs, which you send into battle like heavy siege units. Each race also has multiple deities that you often have to choose between. Depending on whether you choose Apollon, Seth, Hermes, Osiris, Odin, Loki or one of the many other gods, you have special bonuses, units and spells at your disposal that provide a lot of variety. The main game and its expansion also tell an extensive story with varied missions that clearly stand out from Age of Empires 2. Age of Mythology was also the first game in the series to offer full 3D graphics. When it was released, the game not only looked amazing, but also convinced with a great performance even on mid-range PCs.

Microsoft had more to announce besides Age of Mythology Retold. Both Age of Empires 2: Definitive Edition and Age of Empires 4 will be ported to Xbox in the near future. The console versions should not only come up with new controller support, but also be playable entirely with mouse and keyboard. Crossplay to the PC is also planned. Also in development: A mobile version of Age of Empires, but unfortunately there is no concrete information about it yet.

PlayStation Plus: announced the new November free games for PS4 and PS5

The Witcher Remake - CD Pojekt Red has begun work on a remake of the first "The Witcher", which is being created from scratch on Unreal Engine 5

Epic Store: These free games await you next week