It was pretty adventurous in our eighth D&D session! Newly minted heroes Castiel, Nadia, and Arianna battled their way through a Jumanji-esque adventure when they met an oddball recluse who offered them a deal. In our gamemaster diary you can read what the adventurers got themselves into.

After their initial explorations at the edge of the thorny thicket, Castiel, Nadia and Arianna finally ventured deeper into the jungle. They bravely faced robbery bands of monkeys, tigers and ax beaks. Deep in the jungle, at the very end of the path, they finally found the well-secured hut of the eccentric hermit Tyann Bloodsworn. He wasn’t at all happy about the three guests who suddenly knocked on his front door. 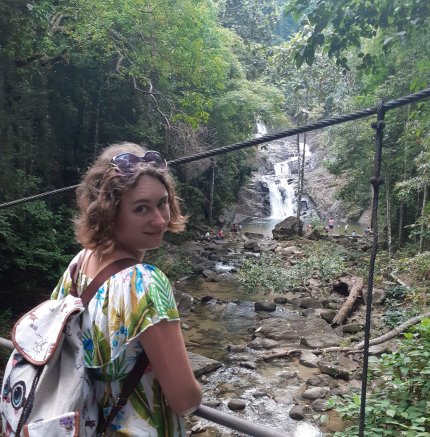 A Thailand jungle vacation a few years ago served as inspiration for this D&D campaign in many ways. Source: buffed Grumbling and morose, he told them that he knew more about the harpies here in the forest, but was not inclined to share his knowledge with them. In a rush of overconfidence, Castiel challenged him to a duel. He couldn’t win this fight, but Tyann was at least merciful now and made a deal with the adventurers: three bottles of rare coconut liquor for everything he knew about the blood magic of the harpies.

After this trade, the adventurers moved on, because they were still on the trail of a lost Tortollan (turtle man). They finally found this hidden in the skull bone of a huge dinosaur skeleton, besieged by a whole pack of hungry ax beaks. After the giant birds were vanquished, Castiel attempted a wild rodeo ride by jumping onto the back of one of the ax beaks.

He carried him away from his companions and finally threw him off. The two threatened each other, fighting for dominance until finally – a tiger broke out of the bushes and pursued the bird. Castiel, in turn, ran after the tiger and so they rushed back to Arianna and Nadia, where the three adventurers finally defeated the tiger, freed the turtle man from his predicament and adopted a sweet dino kitten.

The riddle with the two potions 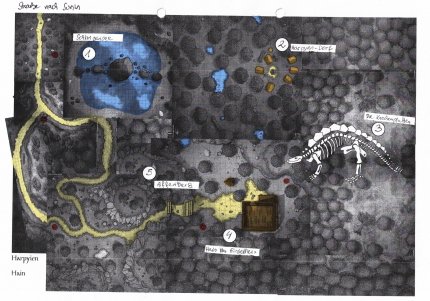 I use this simply cobbled together map to direct the adventurers through the jungle. The red markers indicate their storage locations. Source: Buffed Near the hermit hut, the three adventurers came across a tree stump on which stood two crystal goblets filled with red liquid. All around was a magical, red glowing spell. Nadia used her detect magic spell and found out: The barrier is an illusion. The cups are likely to shatter if you move them too far from the stump – and if you empty them. And the two liquids belong to two different schools of magic: necromancy and enchantment.

After some back and forth, Nadia and Castiel decided to drink the liquids. Arianna stayed out of it – since she’s my GM character and of course I know what the Chalices do, it wouldn’t have been fun to get involved. Nadia boldly decided to drink the necromancy potion, confident that if anything went wrong, Castiel would save her. Castiel drank the enchantment potion at the same time. The effects:

Nadia can now permanently resurrect on death saves with a 19 and a 20 with one life point. An imaginary thundercloud is now hovering over Castiel’s head for the time being, raining down on him and occasionally hitting him with lightning. But because the cloud isn’t really there, he’s not really wet – it’s all in his imagination.

Actually, my plan was as follows: The coconut liquor that Tyann Blood Oath wants can only be purchased in the pirate capital of Sewanna on the neighboring island of Pen Xentray. The idea behind it is that after two adventurous sessions, the heroes have some time for role-playing and can take a look around the city in peace, where they will experience a lot later. So I wanted to arouse the curiosity of the characters so that after level 3 they actually travel to Sewanna – and it just makes logical sense why people suddenly want to go there when Ko Rillan is actually a perfect dream vacation island.

The problem is now the following: Lukas and Saskia can play in session 9, but in session 10 they are not there again. And the two would also like to experience something adventurous and not be in a role-playing session again. But if Davlin and Medea meet Castiel and Co. outside of the jungle and travel to Sewanna with them, that won’t be the case. This will definitely take so much time that they can no longer come into the jungle afterwards. So I’m considering just selling the liquor in Kalarin and just giving the characters another reason to go sightseeing in Sewanna in a later session. 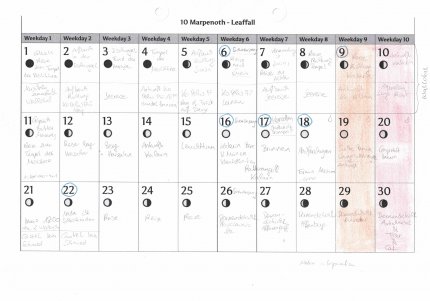 A monthly calendar is a good tool to keep track of things. I would advise any GM to keep a campaign calendar or delegate this task to a player. Source: Buffed So that I don’t lose track, I keep a precise calendar in which I enter the most important events. At the end of session 8, exactly 30 days have passed in the game, i.e. exactly one month. As you can see, we are playing with 10-day weeks, where the ninth day of the week corresponds to our Saturday and the 10th day of the week corresponds to Sunday. This is where people take a break and traders put their feet up.

The lunar cycle is also adjusted to a 30-day month, so that the full moon and new moon always fall on the same days. Days with heavy rain and storms are circled in blue. I roll these out with a W30. The number of storm days corresponds to the number of rainy days in a real Bali climate table. By the way, we are now at the end of the dry period. When the rainy season comes, the stormy days will increase. This is funny because the adventurers will probably start traveling the sea of ​​stars in a small ship right at that time. And then applies: After the storm is before the storm!

Contest: did you like the OPPO A57? That's good, we make you win

Jordan Peele would like to work on a video game