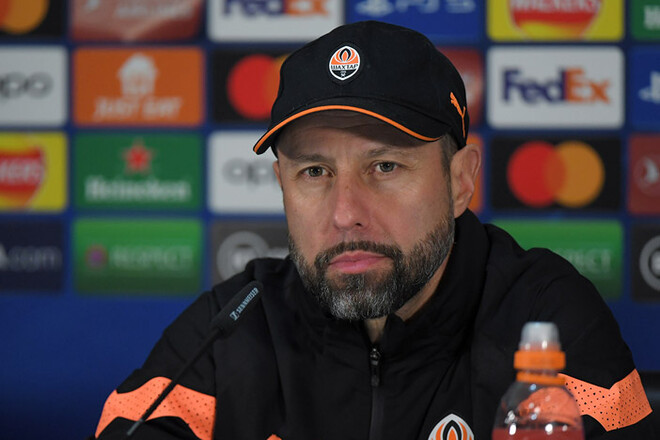 Shakhtar head coach Igor Jovichevich gave a press conference after the match of the 5th round of the Champions League with Celtic (1:1).

– Igor, what did you like and dislike about the game? What are your impressions of the match?

– All liked it. When the result is right, when a draw tastes like a victory, then these are very positive emotions for me personally as a coach and for the whole team. We really expected a tough game and all European teams know that playing here at Celtic Park in front of 57,000 people is not easy even for more experienced teams. But we are so brave, so brave, that we think not so much about the consequences, but about our performances, about our game. When a team shows that during the match it can change the pace and rhythm, become a protagonist, endure, counterattack and show character at the same time. The character that shows the Ukrainian people who are fighting for our freedom, for all of us. Including for athletes, those who play and represent Ukraine on the biggest stage – the Champions League. This result is very important for us. We see it as a great success. Because three months ago no one believed in us, but we did. We believed in daily work. And this is just a consequence of the family atmosphere that we have created. These guys are heroes, really heroes.

– How does Danil Sikan feel after the match in which he did not convert his chance? Did you have a conversation with him?

– Of course, Danil is upset that he didn’t score that goal in a good moment, but he is part of the team, and the team scores together and loses together. It is an integral part of football and we perceive it as football. “Real” (Madrid) scored us in the last seconds – and this is football. We must support him. By supporting him, we support ourselves and the team. What doesn’t kill you makes you stronger. And we are a family. Actually a family. And all the guys have already approached him, all the coaches, to raise their heads. Because few people come out of Celtic Park as proudly as we do today.

– Do you feel that 40 million Ukrainian hearts are behind you and that today you are the flag of Ukraine?

– Yes, this is a huge responsibility, and we felt this support from the Ukrainians. We were focused and absolutely motivated to play. We know that Ukrainian soldiers fight and, unfortunately, die every day. We constantly remember this and try to transfer their courage to the football field. It is difficult to describe these emotions. There is a war going on. And, as you know, I am a Croatian by nationality, but I have known Ukrainians for 20 years and I understand the whole situation very well. But it is also important to understand the mentality of what is happening now. And so we felt full responsibility and pride for representing Ukraine. We fought to the end and believed that we could win. It wasn’t easy. In general, this whole political situation is difficult. But we must fight on.

– Shakhtar have already guaranteed the European spring at least in the Europa League, but I want to continue in the Champions League. Can you give us this holiday and promise that there will be a fight with Leipzig in Warsaw, and then there will be the Champions League? In general, did the result of the match “Leipzig” – “Real” (3:2) surprise you?

– We know that there were no leading players playing for Real Madrid – Modric, Benzema, Valverde. Leipzig went through a change of coach: Marco Rose changed both the formation and the style of the game. We have to understand that this is now a team that fits the second budget in the Bundesliga after Bayern, I think. So they are at a fairly high level and are definitely the favorites in our confrontation. But I want to say that we have also gained momentum, we feel very good, we show it in every match and at least we can successfully resist the opponent. We have the opportunity to win. How it will turn out, I don’t know. But there will be a fight. I am very glad that we have already received the status of a European Cup participant for the spring. This is a big success. But each of us has a dream that no one can take away – to overcome the group and go further and further. The opponent knows how we play tactically, but does not know what is in our souls and hearts. And who we play for is very important. This is our strength.

MUDRIK: “Sikan? Everyone has bad days. Support this Cossack"

Vivo announced plans to update Funtouch OS 13 based on Android 13. Which model can go next!

From the 1st Firefox, the 3rd Tegra and the 8th DirectX (PCGH-Retro 09 Nov)

The best fantasy RPGs on PC