With „The Callisto Protocol“ a new survival horror game awaits us at the beginning of December, the release of which many players are eagerly awaiting. Unsurprisingly, after all, parts of the development team have already worked on Electronic Arts’ “Dead Space” series. We’ve already been able to plunge into the sci-fi fight for survival on the PS5 for an hour and a half, and in our preview we’ll tell you why this time was terribly beautiful.

Fight for survival in space!

More precisely, we had the opportunity to play the 3rd chapter of the game, Habitat. Before we could get started, we received a brief introduction to the story and controls from Striking Distance Studios boss Glen Schofield and another member of the team. The story of the horror game transports us to the Jupiter moon Callisto, where there is a prison in the far future. However, their occupants are not the true danger of the facility.

All hell breaks loose and terrifying creatures roil the entire Blacksteel Maximum Security Prison. We find ourselves right in the thick of it in the role of Jacob Lee, who lends both looks and voice to Hollywood actor Josh Duhamel (“Transformers” series). However, we didn’t get too much of the story itself in the section we played, which is why we can’t tell you anything about it. The focus was clearly on the gameplay, especially on the brutal fight for survival. 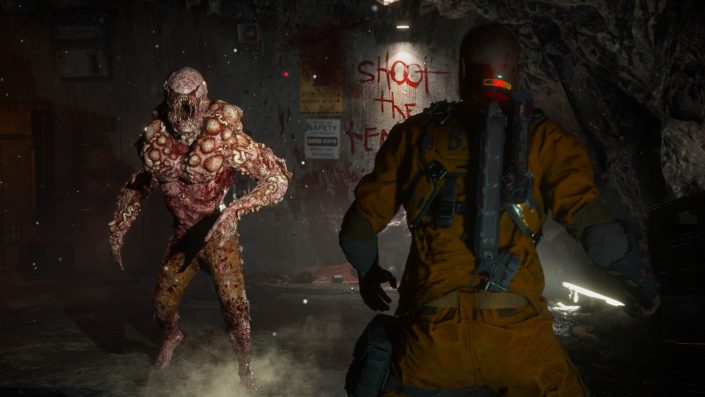 Since we got into the game at a relatively early stage, we obviously didn’t have the very best gear available. Jacob’s “arsenal” included a pistol, a stun baton, a machete of sorts, a shiv (makeshift knife) for opening chests, and the GRP gauntlet. The latter is a particularly useful tool that can be compared to kinesis in Dead Space. This can be used to grab both objects and enemies and throw them around – very handy!

Incidentally, unlike Isaac Clarke, Jacob is far more adept at hand-to-hand combat. In The Callisto Protocol, this is a central part of the combat system and an element that we had to deal with facets of quickly. As is typical for the genre, ammunition was rather scarce in the sections we played, which is why we faced the alien spawn more often than we would have liked with just our baton in hand.

Our reluctant hero can dodge and block enemy attacks. The timing of these actions can be a bit tricky, but they are essential to survival! In addition, Jacob can stomp on downed enemies to damage them. If you work on an enemy’s corpse in this way, you can also receive Callisto Credits (money) or resources. 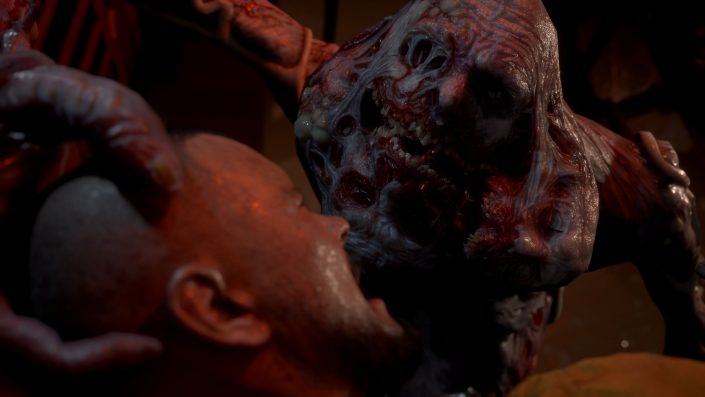 Of course, your chances are significantly better if you don’t let it come down to close combat. With a few well-aimed shots, limbs can be severed from opponents, although this doesn’t always stop the monsters from attacking you further. It gets particularly uncomfortable when your enemies mutate. Here, tentacles proliferate from the chest and you only have a few seconds to shoot them down.

If you succeed, you kill the alien, otherwise it will be much stronger. The transformations of the monsters turned out to be pretty scary, even if the mutants, at least in the sections we played, differed only marginally from each other visually. At certain stations you can upgrade your weapons or replenish your supplies – provided you have enough credits, of course.

Additionally, it makes sense to use the environment to your advantage. With the GRP glove you can, for example, throw opponents into chasms or throw objects lying around at them. As already seen in the trailers, we could also impale the aliens on certain objects or have them crushed. Unfortunately, the number of these options was rather manageable in the sections we played. 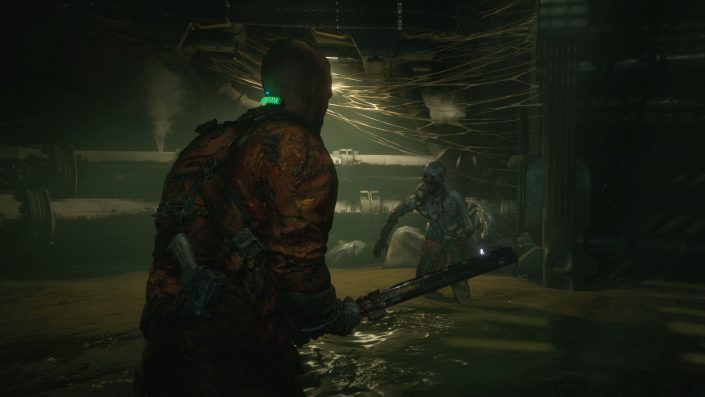 That being said, dragging and flinging objects like aliens was already working pretty well during our preview appointment. However, at one point the game didn’t recognize that an enemy had also died falling into the abyss, which is why an event was not triggered. So we had to load the last checkpoint and kill the enemies in the area the old fashioned way, which fixed the issue.

The “The Callisto Protocol” preview had more to offer than just fights against all kinds of aliens. From time to time, as Jacob, we also had to solve small switch puzzles, which were not particularly complicated, and survive a dangerous slide. But it doesn’t matter whether it’s action or this slightly different slide: Game Over is lurking everywhere and the death animations are as brutal as those responsible had promised beforehand!

Graphically, these were extremely detailed, which applies to the entire game: everything seems to be of one piece and it is clear how much time and effort the development team put into the elaboration of this setting. The various areas that we could traverse as Jacob scored with numerous details, with the simply fantastically successful character model of the protagonist standing out in particular. 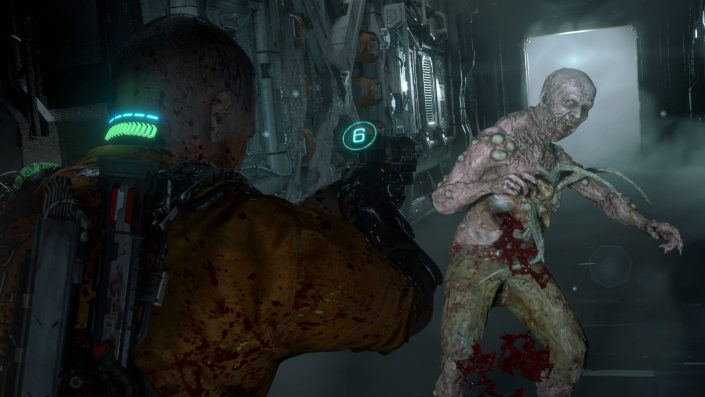 The designs of the monsters we were dealing with were also absolutely impressive. We had to defend ourselves against various aliens that looked wonderfully disgusting. In combination with the excellent play of light and shadow as well as cleverly used fog, the horror game developed an incredibly gripping atmosphere that captivated us from the first second and didn’t let go until the end.

This was rounded off by an excellent sound design in every respect: the soundscape was always extremely dense and we felt observed more than once due to the clever use of different noises. A sense of uneasiness developed that definitely rivals the “Dead Space” series and other horror hits.

The inclusion of the haptic feedback and the adaptive trigger of the DualSense controller are also very successful. The latter skilfully reinforced our main character’s powerful melee attacks, while the former emphasized the character’s steps. Together with the detailed graphics and the dense soundscape, the controller features pulled us even deeper into the terribly beautiful adventure.

However, in the end we have to complain a bit. The performance of the PlayStation 5 version we played was not always consistent, which is why we were faced with slowdowns from time to time. The balancing also didn’t seem to have been optimal in one place or another, because there were a few trial and error sections within the hour and a half that were almost more nerve-wracking than the murderous aliens.

In a brief conversation, one of the Striking Distance team members who was present told us that the choice of location fell on a prison because it’s a place where no one wants to be. A calculation that worked out perfectly in the section of “The Callisto Protocol” we alluded to, because given all the horrors that awaited us there, we definitely didn’t want to change places with the protagonist Jacob.

Of course, we enjoyed our time on Jupiter’s moon despite all the aggressive aliens and other dangers. This was not only due to the extremely intense fights against the aggressive monsters, but above all to the atmosphere of the game that was so dense that you could cut through it. The many years of experience of Schofield and his team with horror games is always noticeable and definitely pays off. Ultimately, it was just the little things that bothered us, such as a few trial and error sections and small technical errors. However, the latter should (hopefully) be fixed before the release. Apart from that, we are already certain that fans of high-quality horror games can look forward to a real highlight here.

Fallout 4 with COD Modern Warfare 2 weapons? Why not, thanks to the new mods

A Plague Tale Requiem: what are the best upgrades and abilities to unlock first?