WoW: Dragonflight: Our new interface – with so many possibilities

WoW is now almost 18 years old and there are few things that show this as well as the dusty interface. It starts with the weird positioning of the elements – who the hell wants to see the current enemy displayed in the top left corner of the screen? – and continues from the outdated look and the lack of setting options to the missing scaling option.

In all the past expansions and patches, however, the developers have always preferred to focus their attention on other things and have given the interface little love. The greatest feeling was when we got the opportunity years ago to finally be able to freely move at least some of the elements. With WoW: Dragonflight that will change.

With the pre-patch of WoW: Dragonflight, the new talent trees have also arrived. We explain to you how they work.

In the following video, Blizzard introduces the features of the upcoming World of Warcraft Dragonflight expansion. However, the professions that have been massively revised in the expansion are not mentioned. There may be a separate tutorial video here due to the large scope.

With patch 10.0, the WoW developers are tackling the much-needed modernization of the interface. Contrary to many fears, however, there is no patchwork, but a comprehensive revision. The people responsible for Blizzard stay on the well-known paths and orientate themselves bluntly to the functions of the most popular add-ons and simply pack them into the original game. In the case of the interface, UI add-ons such as ElvUI were used as a model.

But instead of just blindly integrating all ElvUI functions, the developers sat down and considered which of them is relevant for the majority of WoW players. The result is our new Dragonflight interface.

After the new interface had already been announced by the developers during the first presentation of Dragonflight, we weren’t the only ones excited about the implementation. What was then presented to us in the first alpha, however, was not very impressive. The first version of the new interface consisted of the old interface, which was equipped with an editing function. The feature’s only option was to freely position a handful of elements.

With each additional alpha or beta build, however, the new feature took more and more shape. There is hardly an update in which the new interface has not been expanded by one or the other function. Bit by bit, the editing option kept growing and now, at the end of the beta, it’s finally become a full-fledged feature.

functions of the interface

If you only list the functions of the new interface feature, it doesn’t even sound that spectacular. We can now freely move the individual elements in size and position. That’s almost it. In practice, however, this is an important thing and the reason why so many players have resorted to interface add-ons so far. 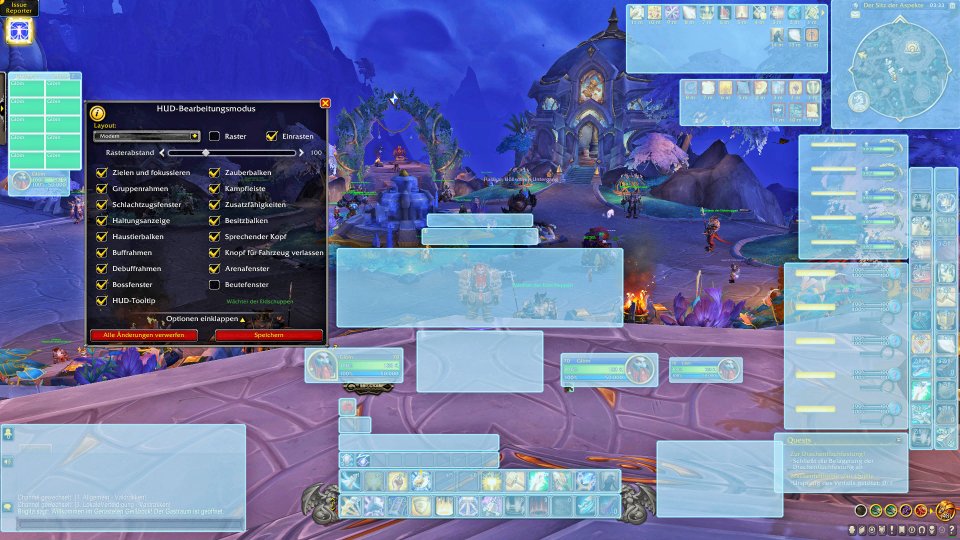 You simply click on the window you want to move and drag it to the desired position. For better orientation, you can display a grid in the background so that everything is perfectly aligned. Source: buffed

In addition, we can also easily adjust the look of a few elements. For example, we can hide the dragons on our action bars or sort the display of our raid differently. When it comes to the look of individual elements, however, the options are still very manageable and do not yet correspond to what the developers announced at the time.

The biggest advantage of the new interface is the almost foolproof operation. You activate the editing mode and can move all elements to where you want them using drag & drop. Clicking on one of the elements opens the respective options window in which you can make further settings. This includes adjusting the size, alignment, spacing, sorting or whatever else can be adjusted. This means that the complete adaptation of the interface to your own wishes should no longer overwhelm a WoW player. 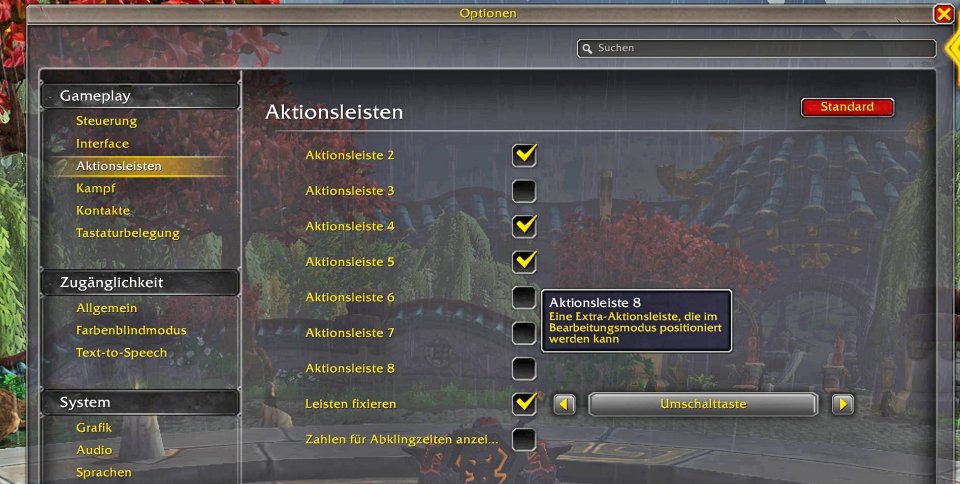 The standard interface gives you additional action bars in Dragonflight. Everyone should be able to accommodate all relevant skills in up to eight bars. Source: buffed

Only in very few exceptional cases are there other settings that you cannot make directly here. This includes, in particular, activating additional action bars. By the way, we’re getting more bars in Dragonflight. A total of eight action bars are then available to us.

While beginners and infrequent gamers adjust their interface once and then probably never touch it again, frequent gamers sometimes have completely different requirements. Anyone who spends a lot of time in WoW (buy now) usually not only deals with different content, but also plays different classes, ways of playing and roles. And as any seasoned WoW veteran knows, a healer’s interface needs to display very different things than a tank’s or damage dealer’s interface.

Of course, it is useful that you can have several interface settings at the same time. These are saved in so-called layouts and they are automatically linked to the respective playing styles of your class. So if you switch from the Guardian Druid to the Restoration Druid, the interface changes completely with it.

But you can also create many other interface layouts and switch between them. Some of us might prefer the quest window to be tiny in the raid or dungeon, but bigger and more centralized when questing. Or you slide the map towards the middle if you want to farm herbs. Not to mention PvP, where you’ll probably want various buffs and debuffs better showcased than tucked away in the corner. Your options are hardly limited and you can switch between the different layouts with just a few clicks. You should only be out of combat.

Conveniently, you don’t have to create all the layouts yourself every time. Similar to the talent loadouts, you can not only save your entire interface, but also share it with your fellow players. To do this, your interface setting can be converted into a character string via a share button, which is automatically copied to the clipboard. If another player adopts this character string and imports it into his game, he has adopted your complete interface. 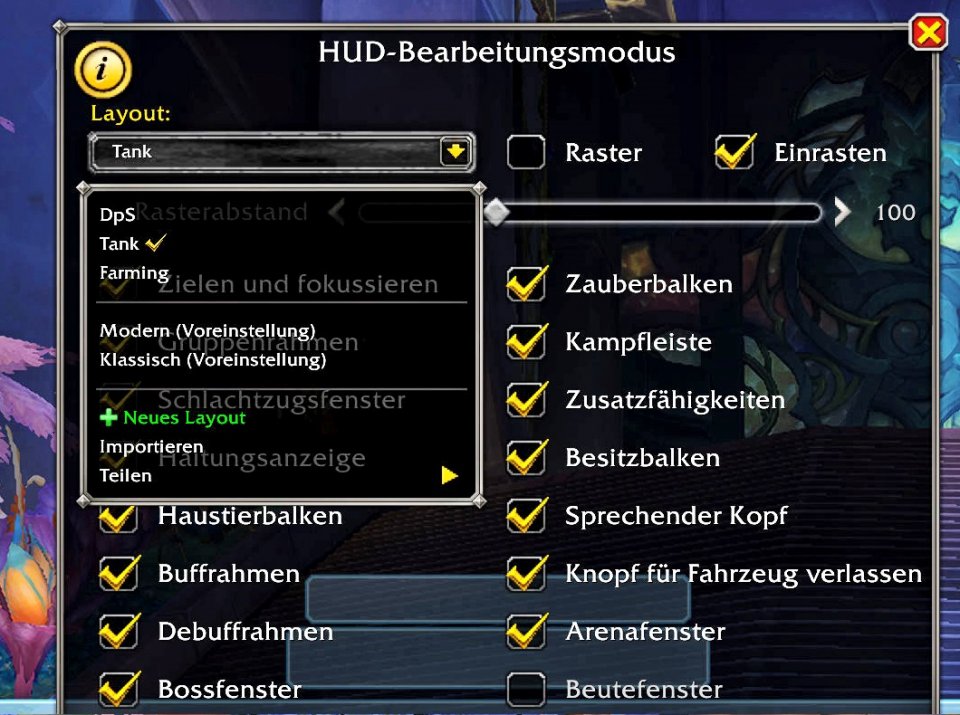 You can save your setting in different layouts and switch between them again and again. An interface for every occasion. Source: buffed

This works surprisingly well in practice. Problems can only occasionally arise if the two players play with different resolutions or aspect ratios.

Quite apart from the fact that we didn’t get different designs, the new interface is by no means perfect and has some weak points. Many of them are more likely to affect ambitious players. This means that individual debuffs or buffs cannot be displayed differently and you cannot influence their appearance – i.e. no bars instead of icons, for example. Also in terms of dynamic sorting of buffs, players or the like, all options are missing, just like a blacklist for buffs/debuffs in the raid frame.

For most players, however, the new interface offers what they want: more flexibility and freedom in designing the UI without being as complex or inaccessible as the usual interface add-ons. In view of this, one can only say: Almost everything was done correctly, Blizzard! Now, if they offer us different visuals, including different textures and lifebar designs, then everyone would be happy.

"Star Wars darker than ever": the new Disney + series goes to the dark side!

Apple confirms that the iPhone will switch to USB-C, but it does not like it

It became known where Dynamo will host Kryvbas

Nothing phone (1): Android 13 is coming very soon to the transparent phone