Amazon Prime Gaming: These games will be available for free in November!

Amazon Prime Gaming: These Games Will Be Available For Free In November!

There was also a big leak recently about the new free games at Amazon Prime Gaming – and it should be right. What else awaits you in addition to the full versions, you can find out here! 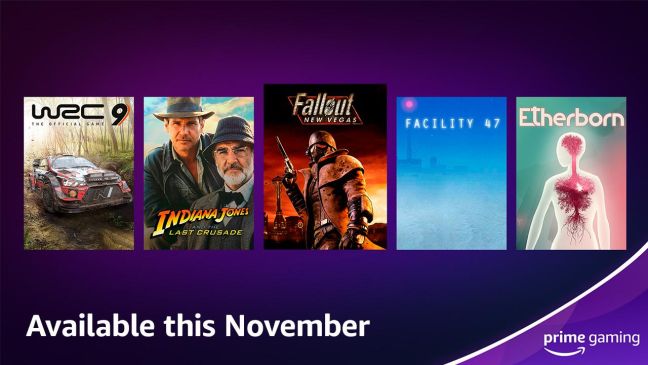 Not only are the new free games on PlayStation Plus Essential leaked regularly before the official announcement, Amazon and its new line-up at Prime Gaming have also recently been affected. The sources of the leaker proved to be correct, because all new free titles available from November 1st have been confirmed.

There are a total of seven free full versions available at the start of the new autumn month, including the iconic Indiana Jones and the Last Crusade as well as the Ultimate Edition of the post-apocalyptic Fallout: New Vegas. The complete game line-up reads as follows:

Fallout: New Vegas Ultimate Edition – Travel the post-apocalyptic Mojave Desert to find the men who betrayed you. Fight your way through the wasteland to take revenge and change the lives of thousands of post-apocalyptic desert dwellers.

Indiana Jones and the Last Crusade – The point-and-click classic from LucasArts and Disney is set in Europe in 1938. The lost Ark of the Covenant was just the beginning, now a great villain is after the most powerful talisman – the Holy Grail. But there are a few brave men standing in the way, luckily Indiana Jones and his father among them. Facility 47 – Enter a remote research station in the middle of the frozen Antarctic tundra. There you have to solve puzzles and unlock new locations in the station. WRC 9 – Race around the world in the leading off-road simulation, now with even more realistic gameplay and more content than ever before: three new rallies, 35 special stages, own custom championships and completely overhauled engine sounds. Etherborn – Embark in search of your destiny in this puzzle-platformer that focuses on exploration and understanding of the amazing, gravity-altering structures. Whispering Willows – Get in touch with the spirits of the dead, solve the intricate mysteries of the mysterious mansion and help Elena find her missing father in this horror/adventure puzzle game. Last Day of June – An interactive cinematic adventure about love and loss. Last Day of June asks “What would you do to save the one you love?”

In addition, Prime Gaming has extended the cooperation with EA Sports for the new FIFA 23 and offers you Prime Gaming FIFA Ultimate Team Packs for another year. Prime members can claim their first FUT Drop today. The package includes 7x Gold Rare Players, 2x Player Pick with at least OVR 81+, 12x Rare Consumables and 1x Kylian Mbappe 5 games on loan. The Prime Gaming FIFA Ultimate Team Pack is the first of many. The next one will be available to coincide with the biggest event in international football, the World Cup in Qatar.

And otherwise? There is also fresh game content available for numerous other current top titles, including GTA Online, Red Dead Online, Apex Legends, Madden NFL 23 and League of Legends. As usual, it’s worth taking a look at gaming.amazon.com, where you can redeem all content with your Amazon account as a Prime subscriber.

In November, Amazon will once again put together neat offers for you at Prime Gaming.

Messi did not react to the end of Pique’s career. They have a conflict