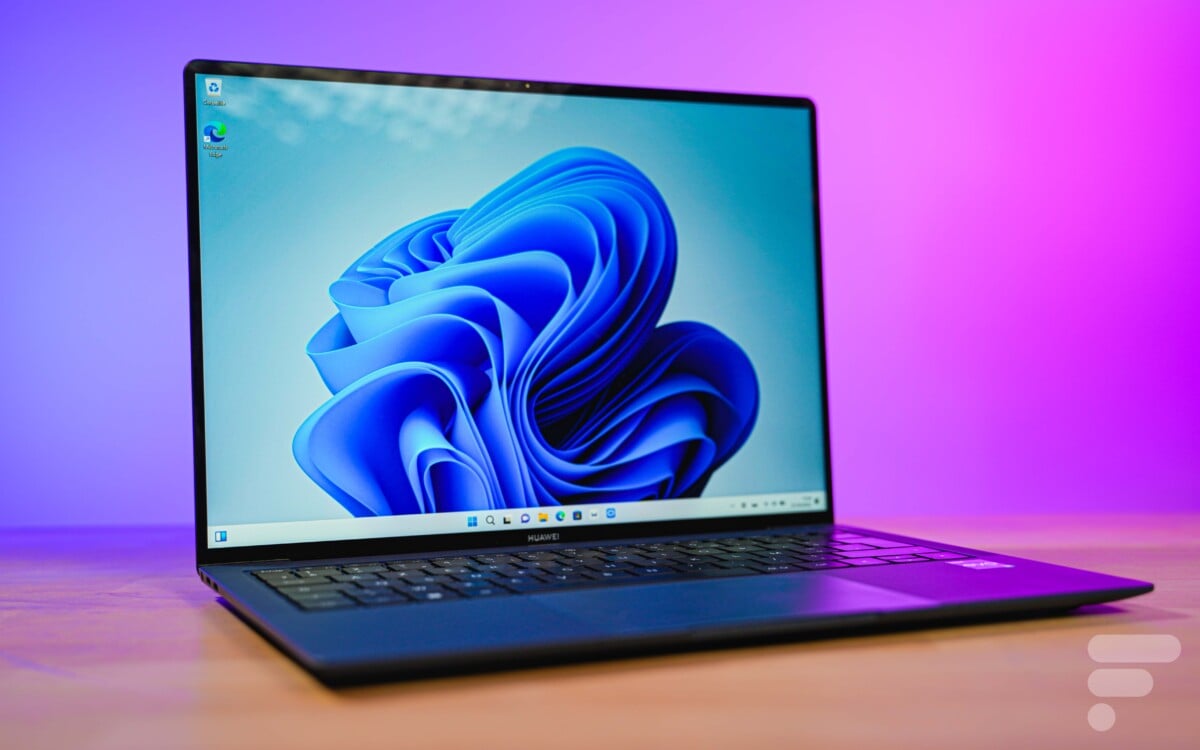 Huawei is clearly making a transition from smartphones to laptops in its Western markets. But where you might think it would take time, all the laptops we’ve tested so far have been convincing. With the 2022 MateBook X Pro, the Chinese manufacturer even seems to want to establish its good reputation, rather than prove it.

The design of the Huawei MateBook X Pro 2022 stays in line with what the brand offers, namely its own version of the classic metal unibody. On this model, however, we have a small specificity in the treatment of this metallic body, since the latter is slightly textured. The feel is hard to describe, but gives the feel of a more plastic coating despite being metal though. 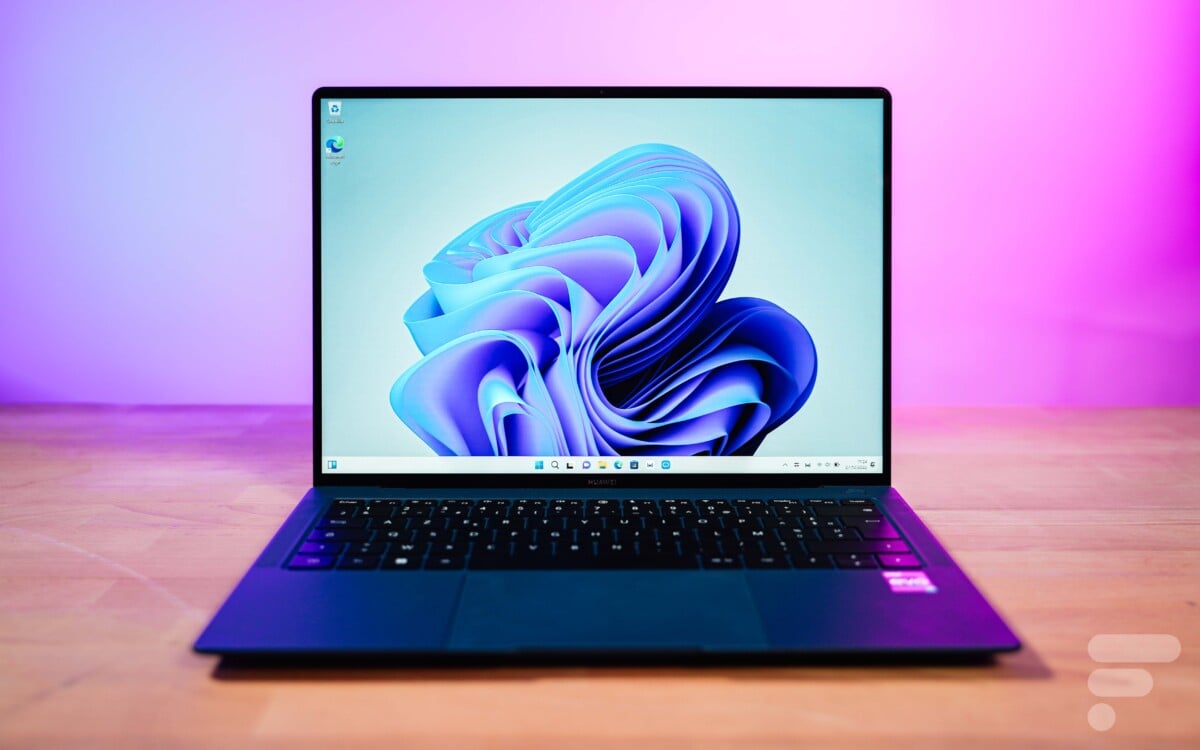 Results ? A laptop that’s supremely comfortable to rest your palms on, without feeling cold or slipping like ordinary aluminum. The ink blue color that we are testing is also not without pleasing us, since it is out of the ordinary while remaining sober enough to be professional. 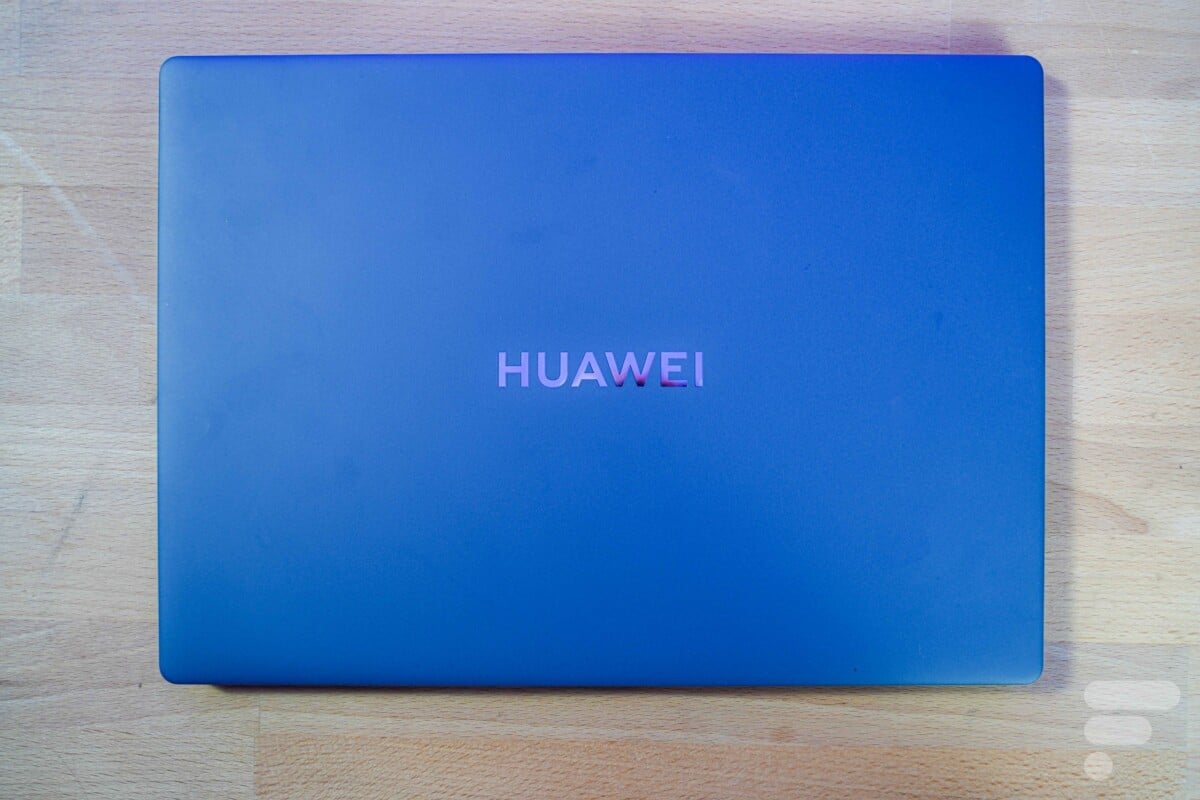 Another particularity of this chassis: Huawei did not hesitate to cut to the heart of this new body. On the sides, slender openings are there to allow active cooling. On the bottom of the touchpad, we have a space cut off from its coating to let us open the hood with ease. If the latter makes opening the computer particularly easy, the former worry about the possibility of spilling any liquid in the device a little too easily. That being said, as we will see below, the thermal solution works admirably well.

The minute we hit the keyboard, we can establish that we are on premium. The chassis has no flex, the keys have a nice firm bounce and a good actuation distance, and the backlight is nicely bright. The same goes for the touchpad, so wide that it goes all the way to the border of the body, which is made of glass. 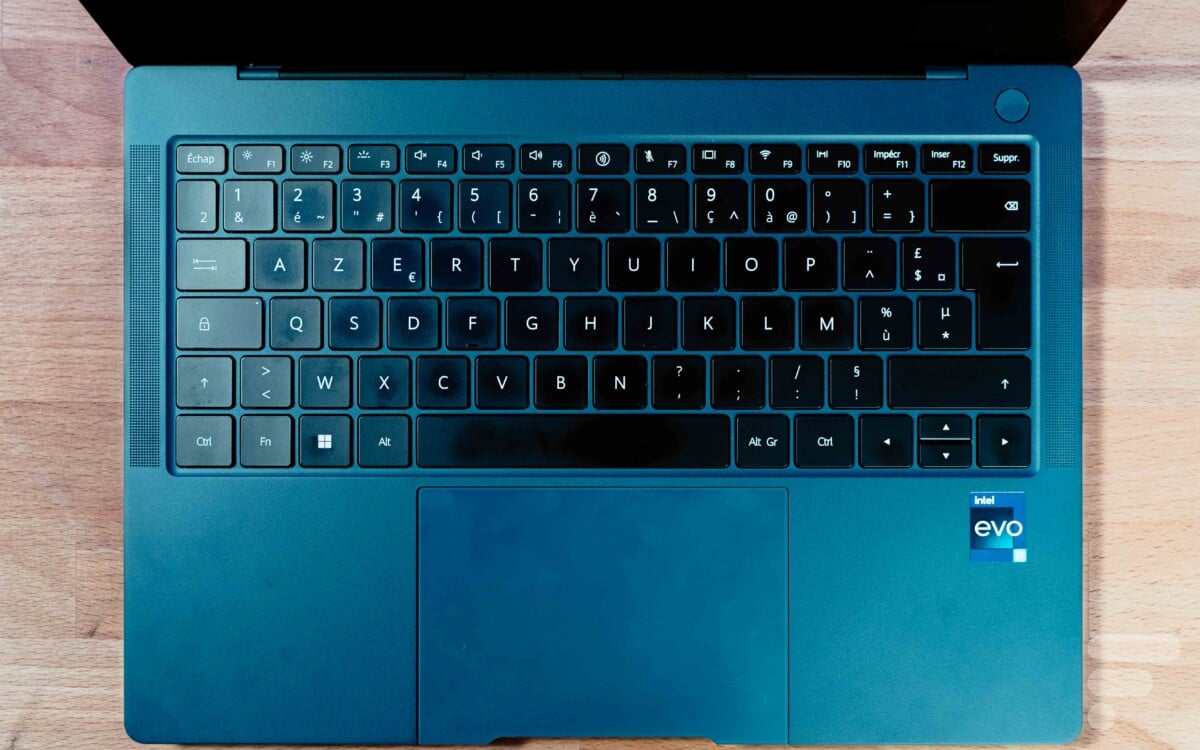 All this is a delight for the fingers as much as the ears, as the keys are barely heard even with a very heavy hit. The touchpad also offers a rather pleasant haptic feedback under the fingers which allows you to trigger some shortcuts such as a quick volume change.

Even though USB-C connectivity is widespread today, the fact remains that the absence of USB A is a mistake that the Huawei MateBook X Pro 2022 chooses. On the left we have a combo jack port, but above all 2 Thunderbolt 4 ports. On the right, there are two USB-C sockets compatible with charging, DisplayPort and data which will accommodate the most classic peripherals.

No USB A, no HDMI, no card reader of any form. The Huawei MateBook X Pro 2022 chooses to remain a premium computer for office automation above all for this reason, even if we would still have appreciated at least an SD card reader. The dongle life is waiting for you. Fortunately, there is one supplied with the machine, a USB-C to USB-A adapter.

No miracle for the 720p webcam, whose processing is not particularly remarkable. We can still note that Huawei this time places the camera above the screen. No more camera under the keyboard which gave a sometimes unenviable angle of view on the nostrils. 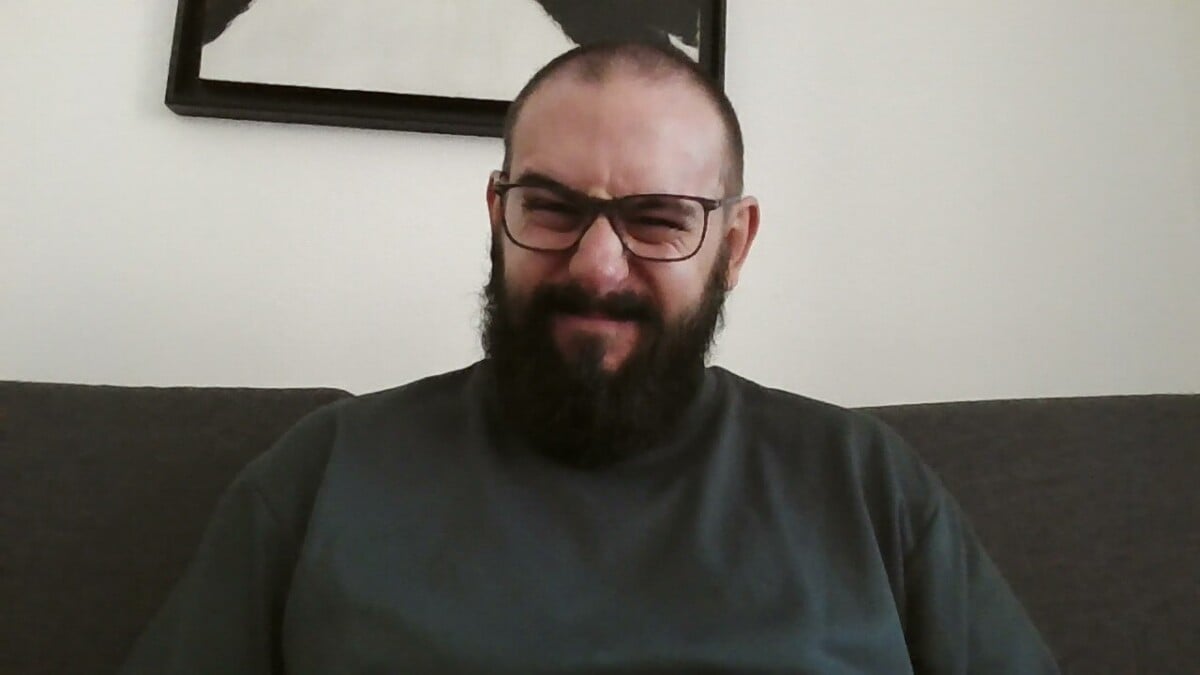 The audio configuration is however successful, in particular thanks to the placement of the speakers on the sides of the keyboard. There is nothing better to avoid clogging them when the PC is placed on its lap. The sound itself is in the upper middle range of laptops of this generation, with a fairly well-defined sound in the highs and mids, but lacking in roundness in the bass. On this point, Apple remains the king, and Dell the most serious competitor in the Windows universe.

The Huawei MateBook X Pro 2022 is equipped with a 14.2-inch LTPS panel in 3120 x 2080 definition, a ratio of 3:2. This panel is compatible with a refresh rate of 90 Hz, although the computer is configured at 60 Hz by default. On its official data sheet, the Chinese manufacturer makes great promises such as DCI P3 support, 500 cd/m² of maximum brightness and even an average Delta E of 1 with a contrast ratio of 1500:1.

And under our probe with the DisplayCal software, we can see that those promises…are kept, overall, with a few little surprises here and there. For example, we find a coverage of 137% of the SRGB space, 94.8% of Adobe RGB and 97.4% of the DCI P3 space. The latter is not perfect, but remains very satisfactory. The same goes for the average Delta E00, measured at precisely 1.02, which therefore remains within the frame, for an average color temperature of 6188K (a little warm, but not that far from the NTSC standard). 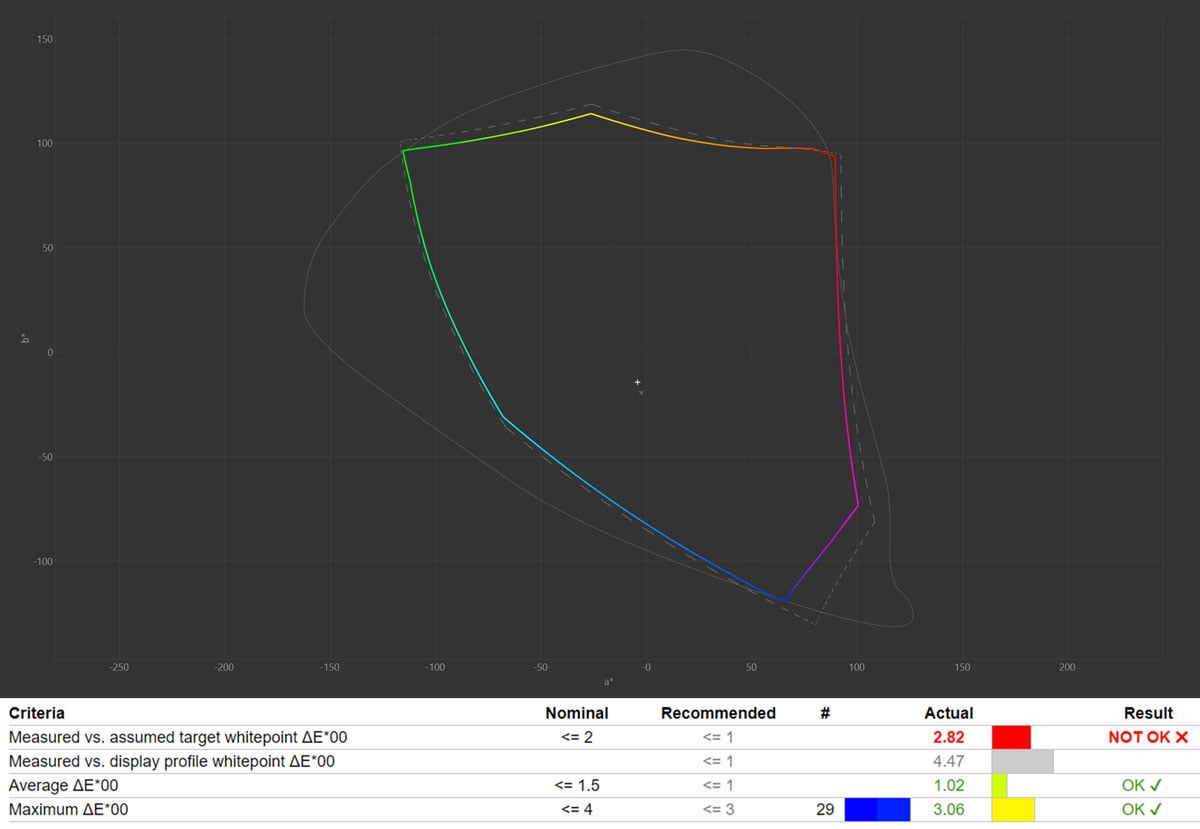 The little surprises come in the details, since the contrast ratio is rather measured at 1359:1. But at the same time, we note a maximum brightness of 576 cd / m². Considering that this contrast remains very good for an LCD panel and that more brightness is always appreciated to guarantee good readability in the sun, especially for this glossy touchscreen compatible screen… We are far from disappointed with these results.

Coming out of basic Windows 11, which at least has the merit of not having Norton or McAfee preinstalled, we remain on the basics of Huawei with these GlideX or Control Panel applications which we are still struggling to find the interest in the face of solutions already developed natively by Microsoft.

The PC Manager software remains at least a rather good solution for easily managing the performance of your MateBook X Pro 2022 if you are a neophyte, although the possibility of having finer settings for connoisseurs would have been appreciated.

The Huawei MateBook X Pro 2022 is equipped with the latest 12th generation Intel chip, the Intel Core i7-1260P. It is a 12-core, 4-performance and 8-efficient SoC, for 16 threads, which can turbo up to 4.70 GHz. It is here coupled with 16 GB of LPDDR5 RAM and 1 TB of NVMe storage in PCIe 4. This is the most popular configuration for ultrabooks this year.

The least we can say here is that we are on conquered ground. We find here results similar to all the other computers sharing this configuration, with a multi core score of 8577 and single core of 1712 under Cinebench R23. The same is true under PCMark 10, with an overall score of 5768 points. Same for its PCIe 4.0 SSD, whose performance is again average. 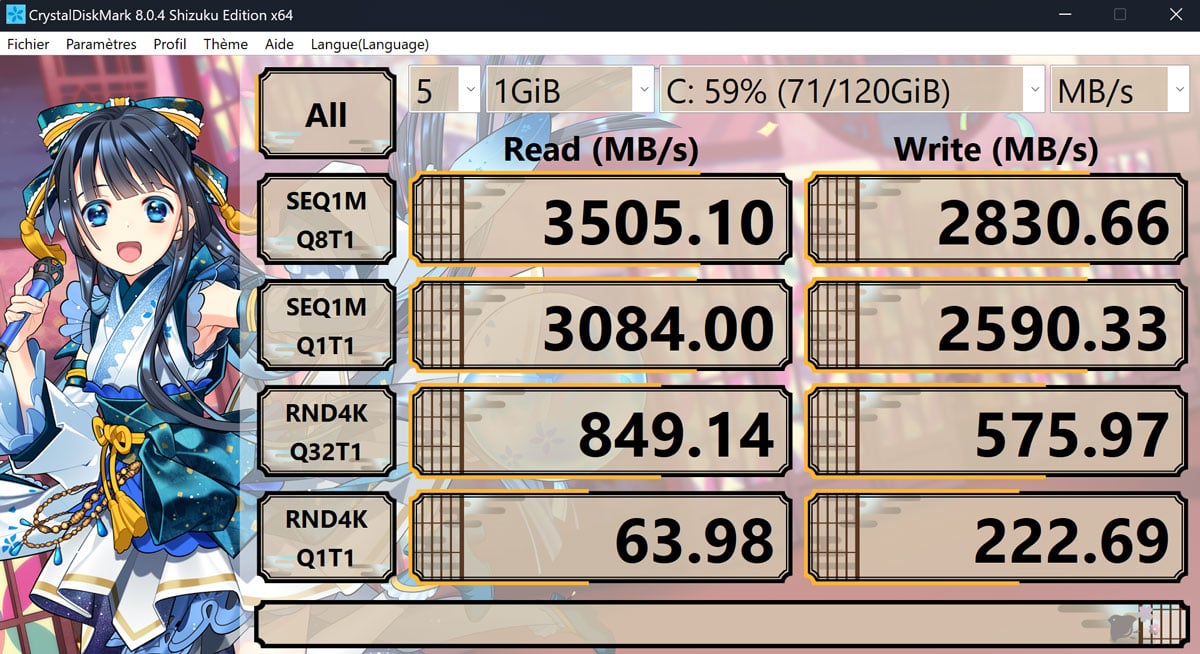 A configuration of this kind naturally comes out brilliantly on office tasks, and to offer exemplary fluidity on a daily basis. Small graphic works are also done without problem, although it will naturally be more patient on its renderings.

This is where the Huawei MateBook X Pro 2022 impresses with its performance. Because yes, in synthetic tests pushing it to the bottom, it sends the same sauce as its rivals. And at the same time, the heating is relatively comparable with temperatures of up to 43°C, although far from the user and his natural position.

But what really impresses here is that the computer maintains this power and these temperatures…with minimal noise. Almost non-existent in a room where a TV is in the background.

All that is missing from this beautiful portrait is good autonomy. The Huawei MateBook X Pro 2022 has a 60Wh battery, which is recharged through a 90W USB-C block. However, the charging port supporting PowerDelivery, you can use any charger to be able to give your computer a little pep during the day. 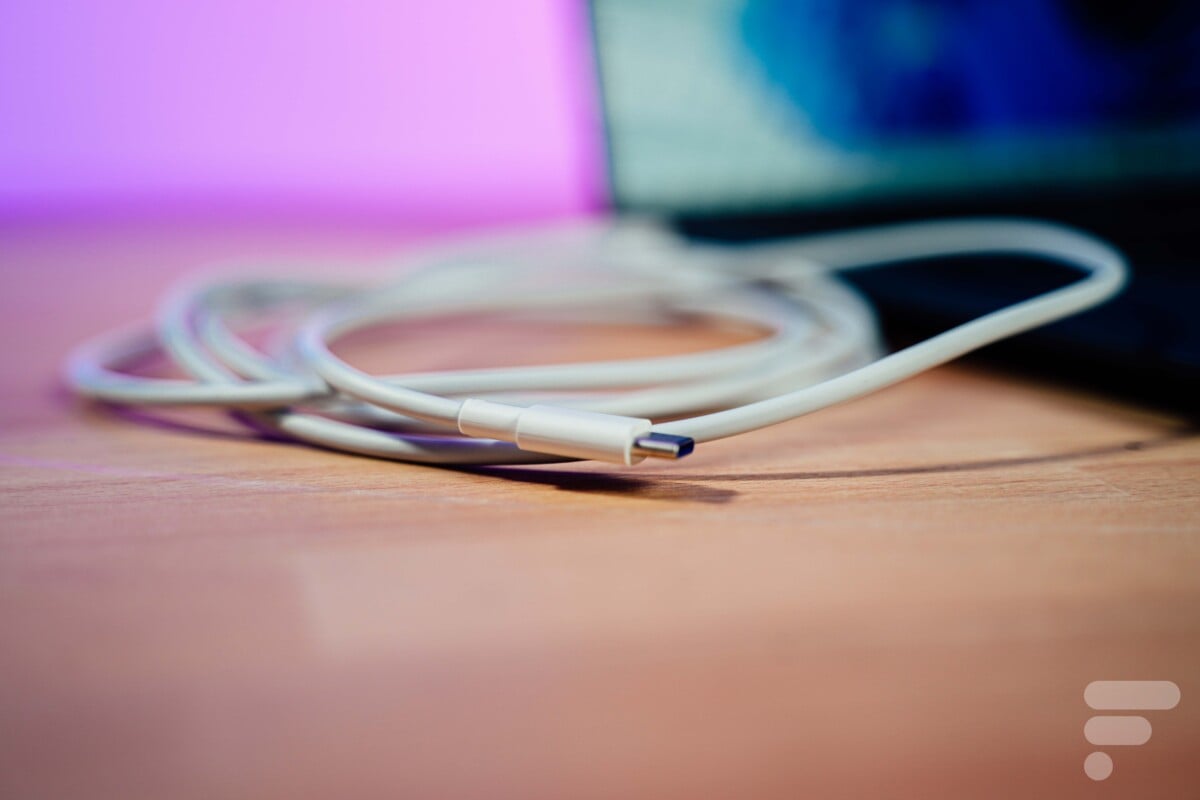 If at least you feel the need, since the autonomy of this laptop is found between 8 and 9 hours on conventional use. Surfing the net, a bit of music in the background, with good brightness in the middle of the day and a video on the background. Either enough to hold a classic working day, without being overzealous… if you keep the screen configured at 60 Hz by default. In 90Hz, you will have to say goodbye to 2 hours of your autonomy. 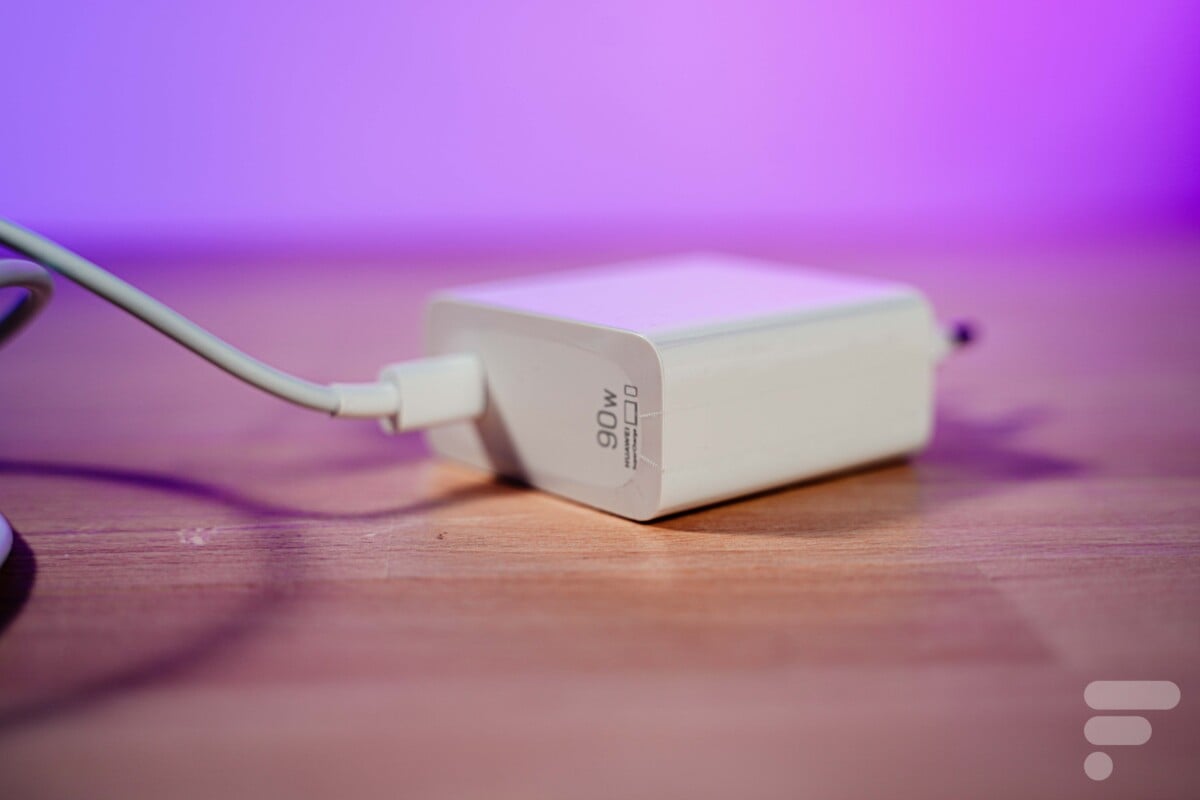 The Huawei MateBook X Pro 2022 is already available in Franc on the manufacturer’s store in a single configuration sold at the recommended price of 2199.99 euros. At the time this test is published, however, it is indicated as out of stock.

Where to buy The
Huawei MateBook X Pro (2022) at the best price?

George R.R. Martin wanted House of the Dragon to start half a century early