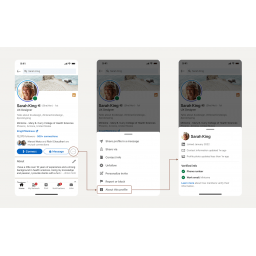 LinkedIn has introduced three new features to combat fake profiles and abuse of the platform, including a new method to confirm if a profile is authentic based on whether it has a verified business email address or phone number.

In the past few years, hackers have often misused LinkedIn to initiate communication with potential victims, as well as for spreading malware, cyber espionage, credential theft or financial fraud.

One example is the notorious North Korean hacking group Lazarus, which typically approaches its targets through LinkedIn with fake job offers. These fake job offers usually result in a malware infection that gives hackers access to the victim’s device, and potentially the corporate network, and in one case LinkedIn allowed North Korean hackers to stealing hundreds of millions of dollars worth of cryptocurrency.

And Russian hackers from the SVR group, which is linked to the Russian government, have also been spotted on LinkedIn when they used zero-day vulnerabilities in Safari for attacks on business network users.

LinkedIn announced that it has started displaying more information about accounts to verify their authenticity.

The first step in the fight against fake accounts on LinkedIn is the introduction of a new “About this profile” section that gives users more information about the profile, such as when the user created their profile, whether the owner has verified their number and whether they have linked a business email address.

If cybercriminals were to use a fake account to approach a target on LinkedIn, they would have to invest a lot of time in maintaining and managing a fake account that has a credible creation date. Since they do not have access to corporate email, it would also be difficult for attackers to verify fake accounts as authentic.

The second step is to use artificial intelligence to find accounts that use AI-generated images as profile photos, a clear sign of fraudulent activity. LinkedIn says it uses “state-of-the-art technology designed to detect subtle image artifacts associated with the artificial intelligence-based synthetic image generation process without performing facial recognition or biometric analysis.”

It is also new that LinkedIn will display a warning when a chat participant suggests continuing communication outside the platform.

Cybercriminals often use this tactic on social networking platforms – once they have established communication and gained trust, they suggest communicating on a “safer platform”.

In most of these cases, victims are tricked into downloading a modified version of the messenger along with spyware.

It’s a common scenario of the famous “pig butchering” scams when scammers contact people on social media and once they gain trust and continue communication on another platform, the next thing that happens is stealing cryptocurrency.

Time will tell whether these new LinkedIn security features will be enough to stop abuse of the business network, but they should make it significantly more difficult for fraudsters.