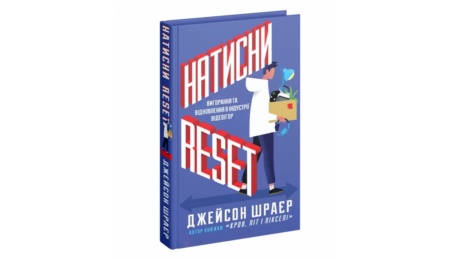 The second book of the famous gaming journalist Jason Schraer will be released entirely in Ukrainian – it is published by the MAL’OPUS publishing house, which has already opened pre-orders on its website at a promotional price 351₴ (temporarily 10% discount from the regular price of 390₴).

I am so glad that my last book was published in Ukraine. I will donate part of the proceeds to support the Ukrainian victims of the war https://t.co/8wHCyIh01o

The original English version of the book, Press Reset: Ruin and Recovery in the Video Game Industry, was released in the US and several other English-speaking countries in May 2021. In Ukraine, it will be released under the title “Push Reset: Vigorannya and Renovation in the video industry”. The book has a format of 20×14 cm and 360 pages. 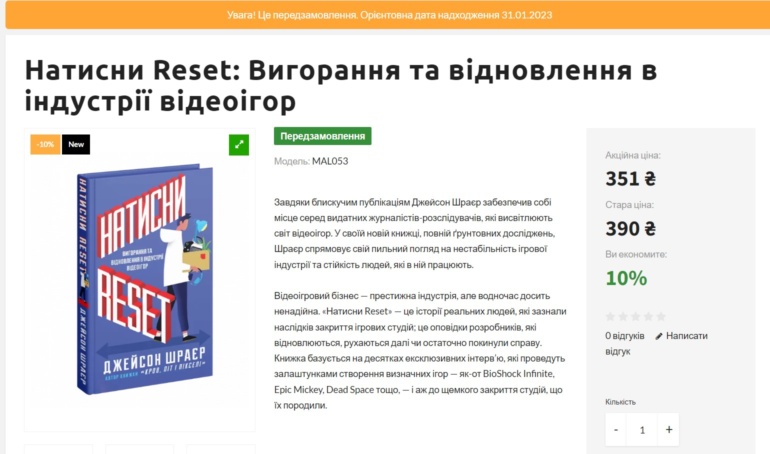 The Ukrainian version of the book was developed by Olena Oksenych, known for translating such novels as American Psycho by Bret Easton Ellis, The Handmaid’s Tale by Margaret Atwood, The Sandman series by Neil Gaiman and others.

MAL’OPUS says they are finalizing the book and will be preparing it for print soon. The website of the online store states that approximate date receipt of the book on sale – January 31, 2023. What will be the circulation in the publishing house is still being determined (obviously, they will come from the number of pre-orders).

This is the first full book of MAL’OPUS, known for releasing localized comics in Ukrainian, under licenses from publishers such as Marvel Comics, Dark Horse Comics, Oni Press, and artbooks from Titan Books and Dark Horse. Of the recent ones, at the beginning of the month we had a review of the artbook “Game Consoles 2.0: History in Photos from Atari to Xbox”.

Briefly about the book itself

“Push Reset” is the second monumental work by journalist Jason Schraer, known for his meticulous investigations into working conditions in various studios and the history of the development of various video games, after the book “Blood, Sweat and Pixels”, which turns the video game industry inside out and shows what the victims are dedicated developers.

His second book takes you through the hard behind the scenes of some of today’s most outstanding video games. Based on exclusive interviews with the developers, a Bloomberg editor reveals how the acclaimed cyberpunk action series Deus Ex came to be; why Irrational Games, the creators of the BioShock series, shut down after its overwhelming success; and why EA bosses killed their studios one by one.

If in “Blood, Sweat and Pixels” he talked about the difficulties in developing famous games, then “Push Reset” concentrates on the fate of individual developers.

“Push Reset” is the story of real people who were subjected to the closure of game studios; these are the stories of developers who recover, move on further, or finally leave the business. The book is based on dozens of exclusive interviews that take you behind the scenes of the creation of great games like BioShock Infinite, Epic Mickey, Dead Space and more. – and up to the aching closure of the studios that gave birth to them.

summary of the book A historical moment for Brazil, or how did the Kichenok rivals play?

Alert: If you make this IBAN change you will lose money!