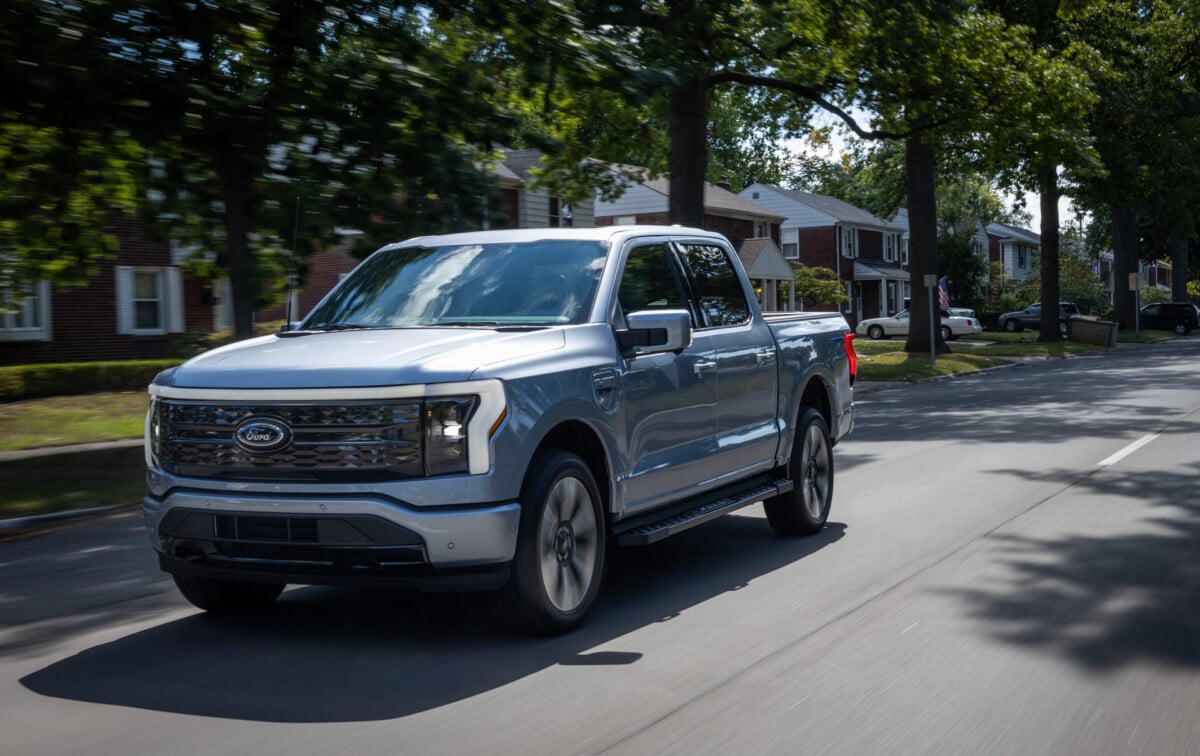 Imagine, when the best-selling car here is a small Clio, in the USA it’s a pick-up that’s been at the top of the podium for years: the good old Ford F-150, which has certainly been able to evolve over the generations, but remains a machine that could not be more traditional, for an audience that is just as traditional, far from the early adopters of Toyota Prius and Tesla on the east and above all, west coasts.

Last year alone, no less than 700,000 units were sold, with good big old school internal combustion engines and it has held the lead in sales for… 44 years, followed by the Ram and Silverado, its direct competitors. It must be said that these are utilitarian machines in addition to taking everyday family use.

An undeniable success, which surprisingly, its electric version, the F-150 Lightning, seems to be able to sustain. Because since its launch, the Lightning has lengthened the waiting list of its future customers, which are now 200,000 (one year of waiting…) while the annual production capacity of the brand new unit at the Rouge site in Dearborne , near Detroit, is ramping up to successfully produce 150,000 units a year, employing around 500 people, in two 10-hour shifts. 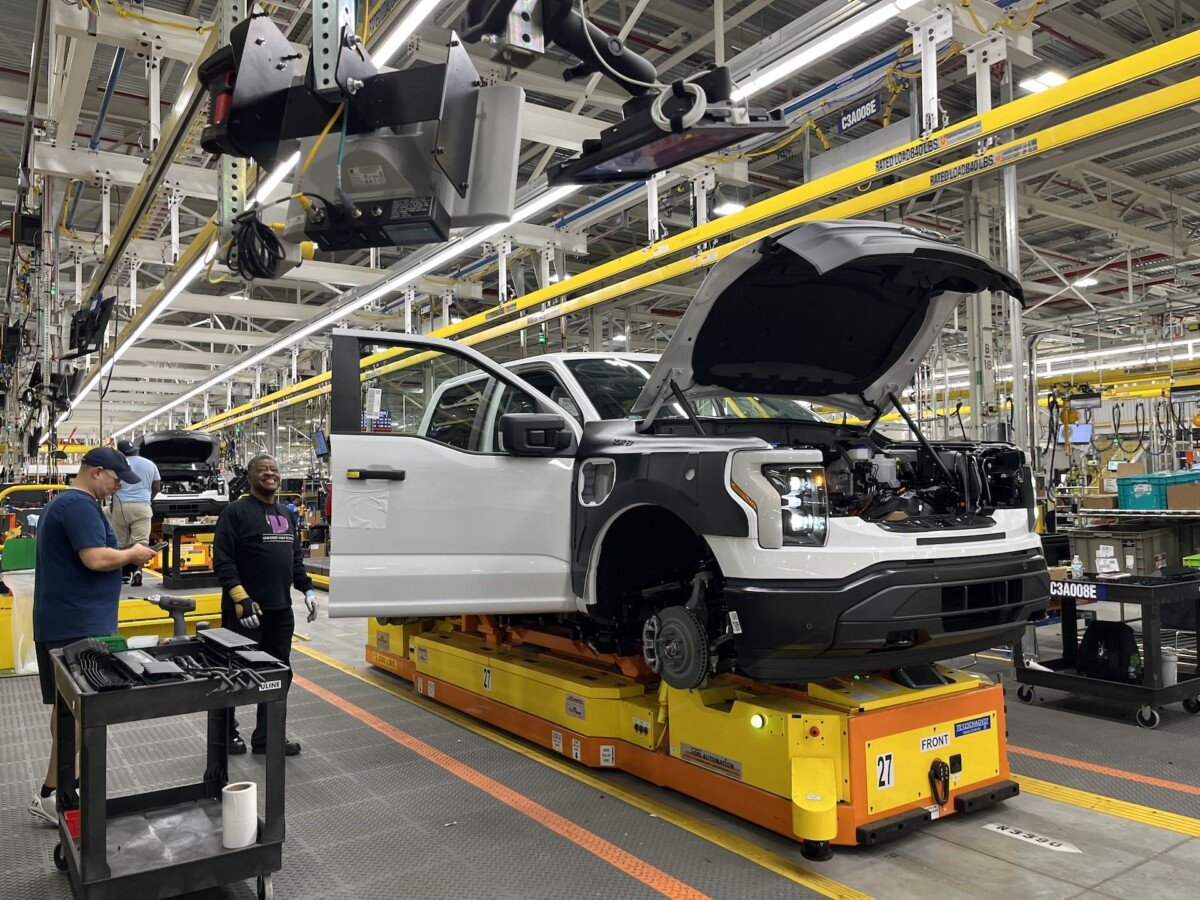 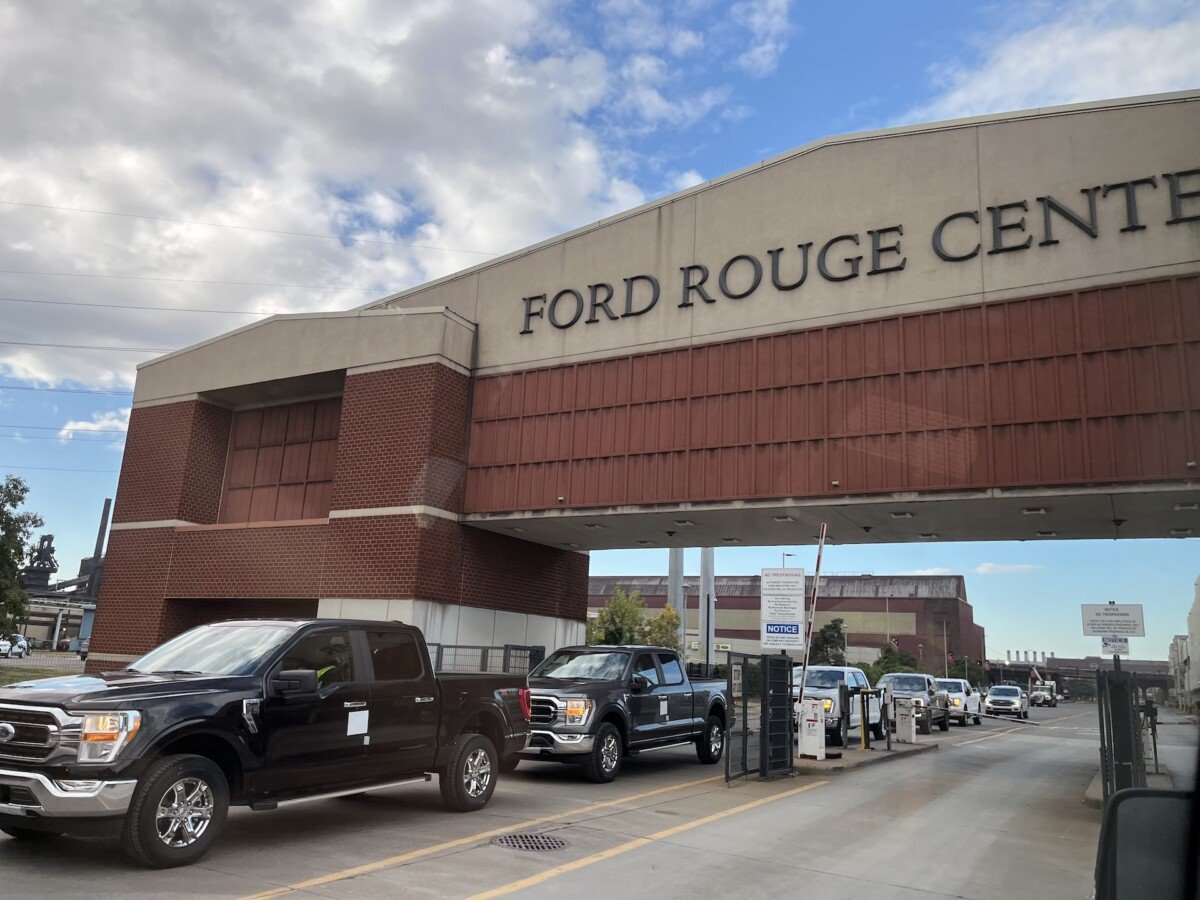 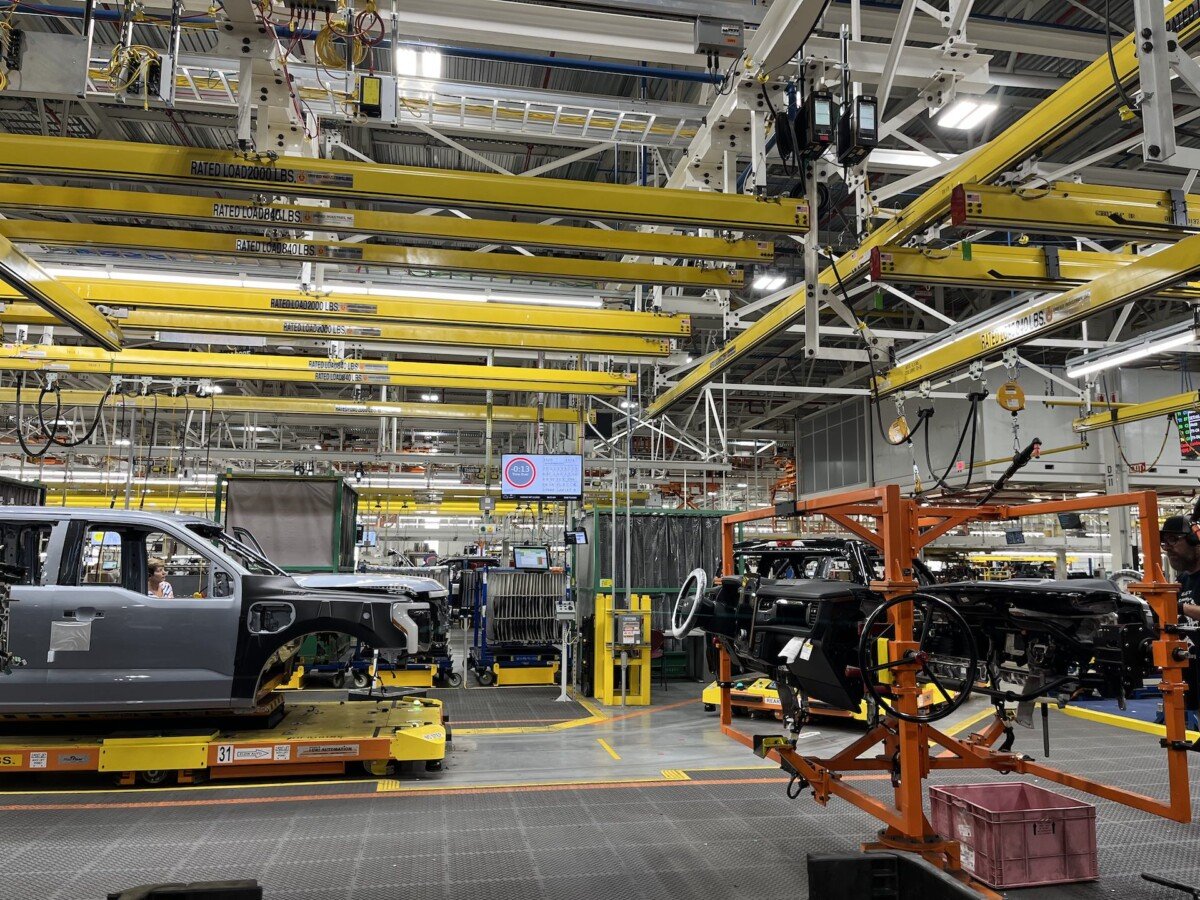 We were able to visit this factory dedicated to Lightning, immaculate and punctuated by the haunting but inexorable advance of XXL pick-ups. In all, it takes a day to finish manufacturing a car here, on highly automated lines, but with human intervention almost at every step. Plant boss Mark Shkoukani tells us that every employee is proud to work here, and that they receive many requests from other parts of Ford’s historic complex.

A sign of the times, as President Joe Biden himself expressed strong support for the industry at the Detroit show in September.

A few figures to take the measure of the performance potential of the machine: it develops 588 horsepower with its two engines which naturally give it all-wheel drive, as well as a truck-like torque of 1,050 Nm. stop to 100 km/h in just 4 seconds, like a super sports car! But what are the sensations that it can give at the wheel?

It’s time to take possession of our F-150 Lightning, which weighs 3 tons and is 6 meters long. 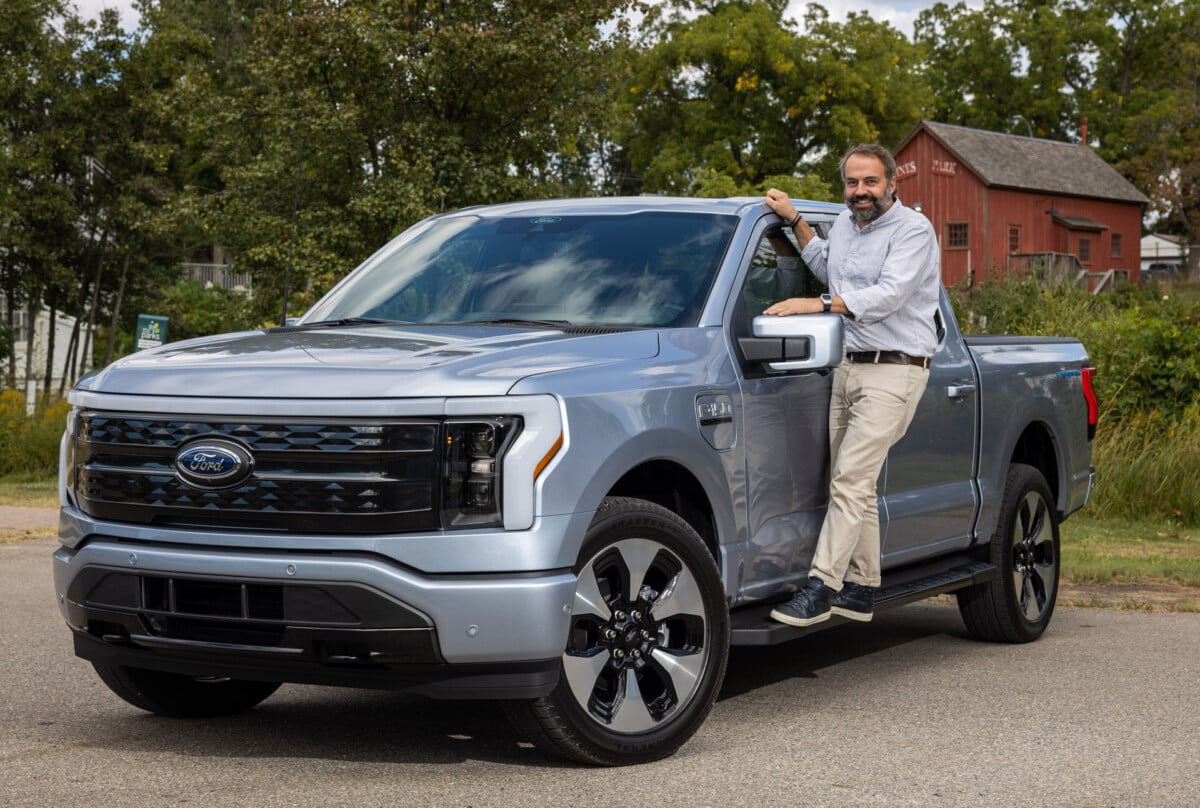 Approaching the beast, we recognize it by its front face which has yielded to the widespread temptation to install a strip of LEDs to proclaim its operation to the electricity fairy. But apart from a few logos and details, the bodywork built in aluminum so as not to weigh the beast down even more remains very close to its original thermal model. 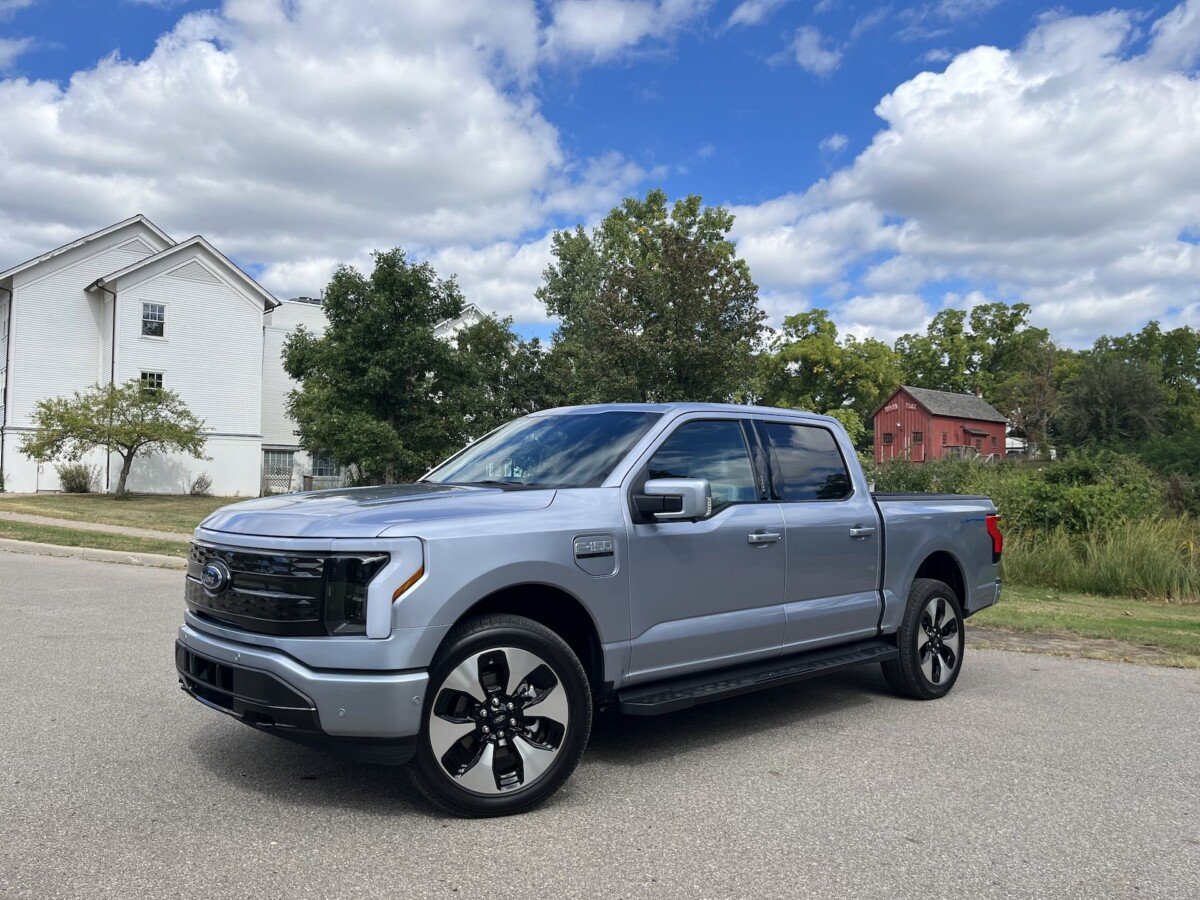 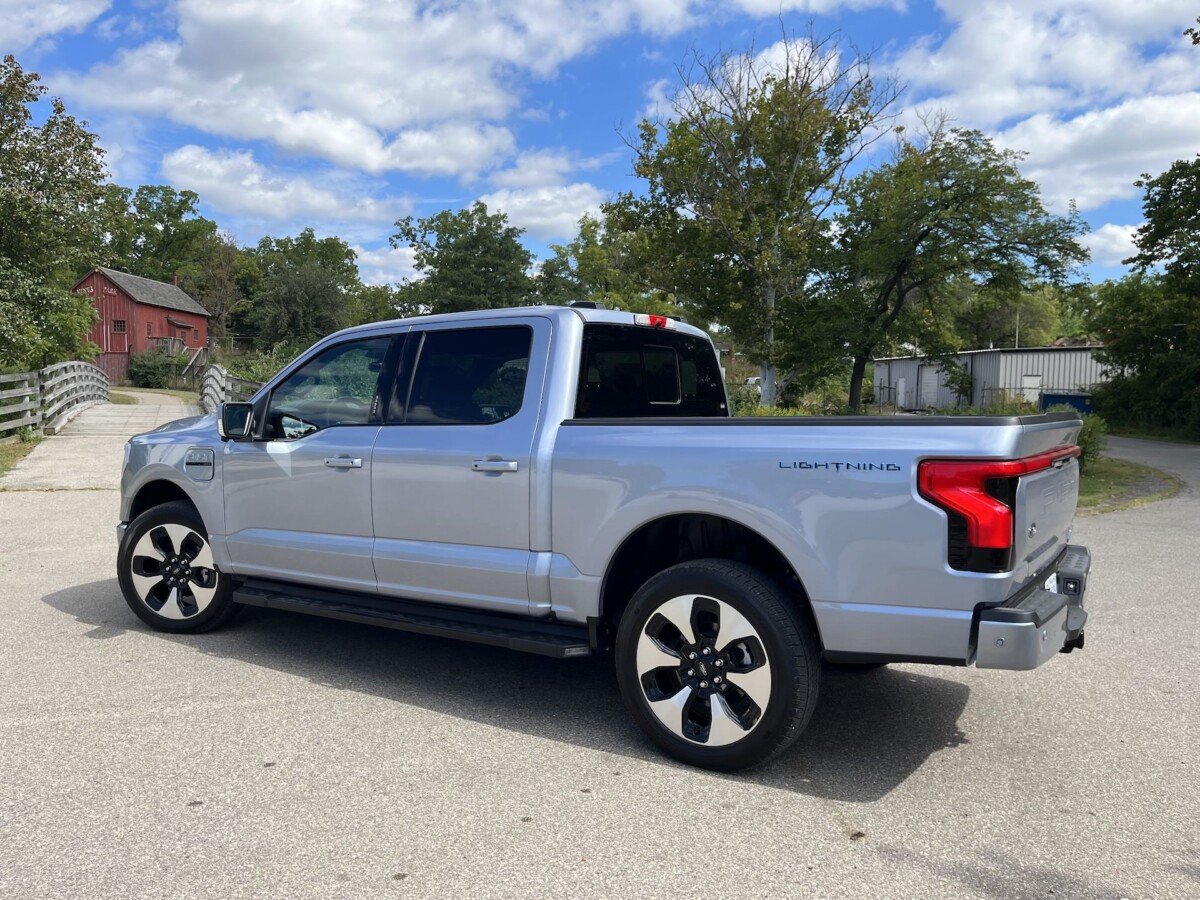 A choice not to disorient future customers, unlike Chevrolet, which more clearly differentiates its electric Silverado, expected next year. It’s big, it’s high, it’s wide, well planted on huge 22-inch rims, but climbing on board, you easily feel comfortable: the driving position is close to that of a n a classic car, the seat (leather, massaging, ventilated and heated here) is particularly soft and the controls instinctive. 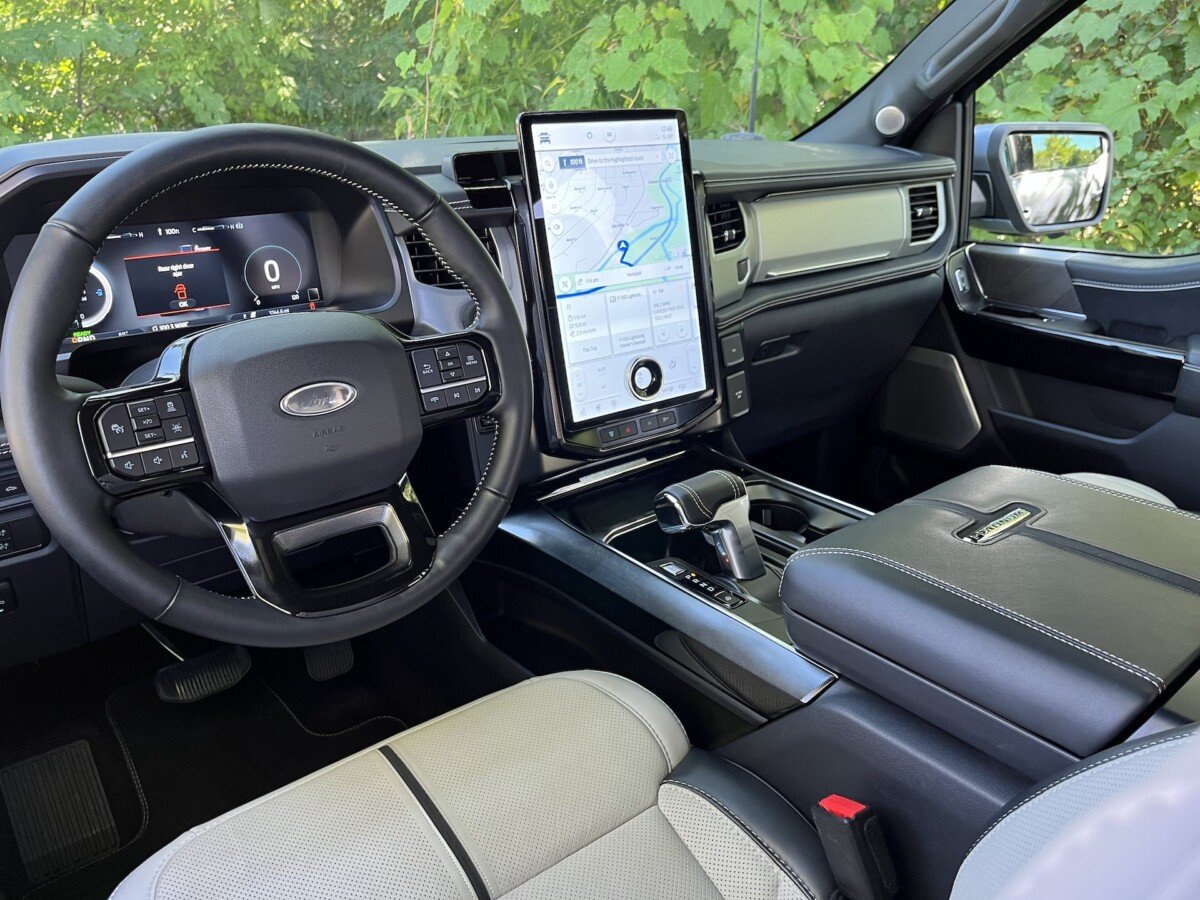 It must be said that our top of the range is entitled to the same beautiful vertical 15.5-inch screen as the Mustang Mach-e, with its Sync 4A operating system with voice recognition, in addition to the 12-inch digital instrumentation. A clever tablet can be deployed on the center console to work with a laptop, once the transmission selector lever is retracted (electric control). 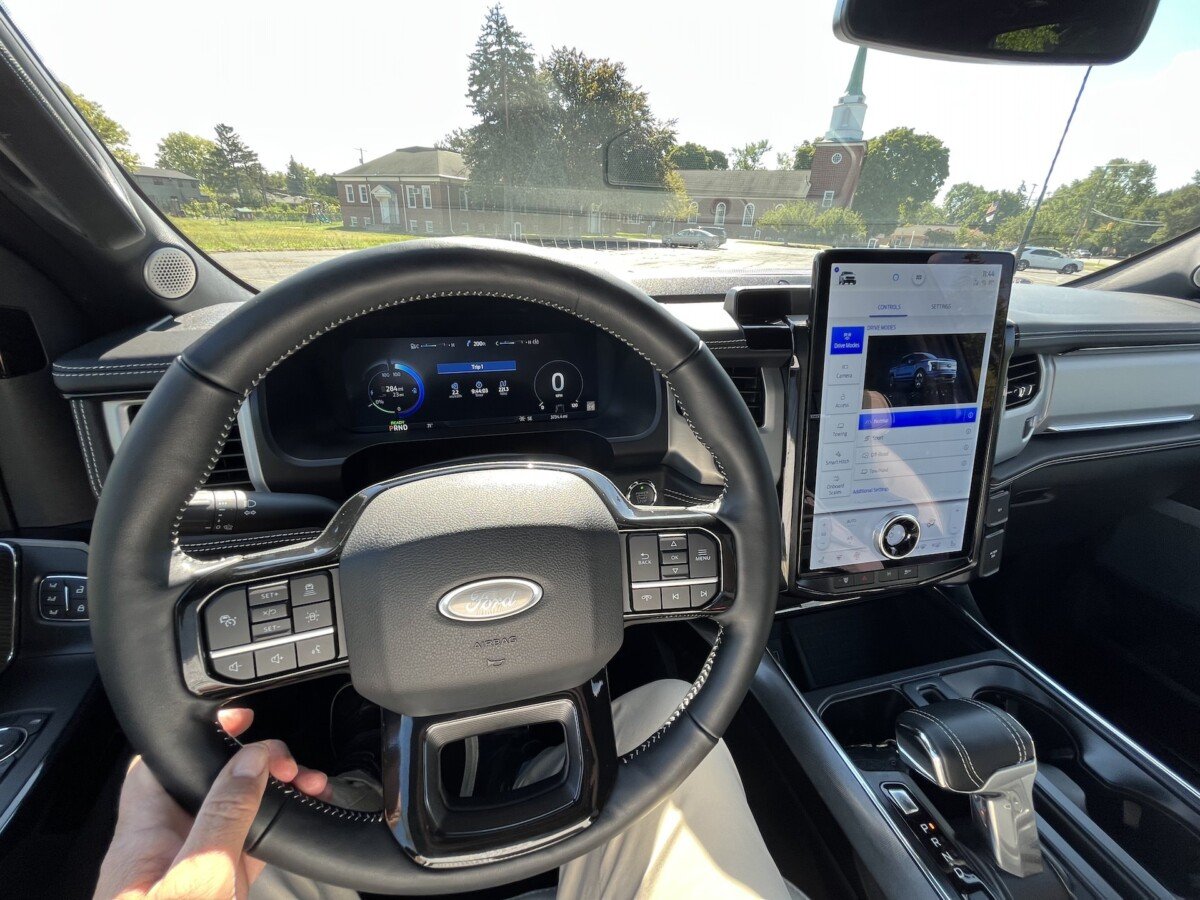 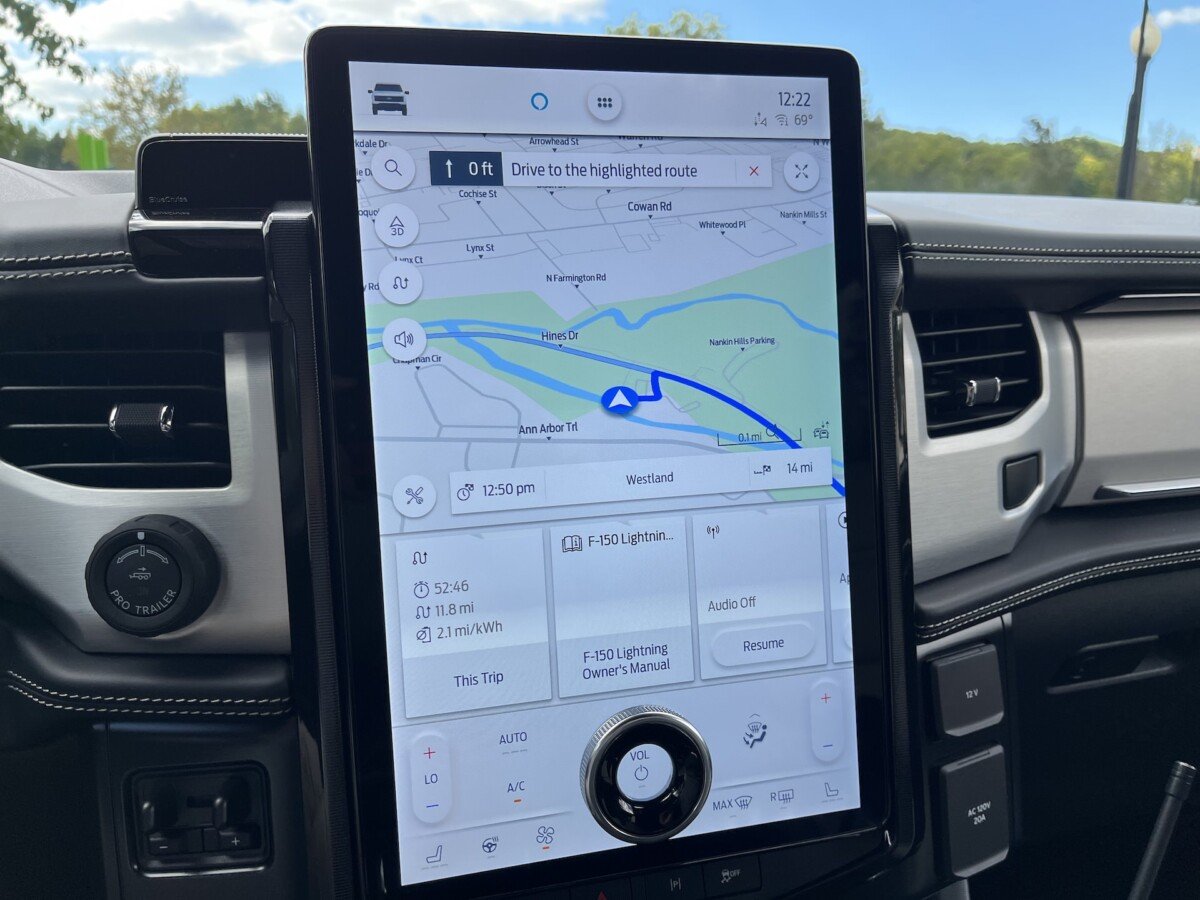 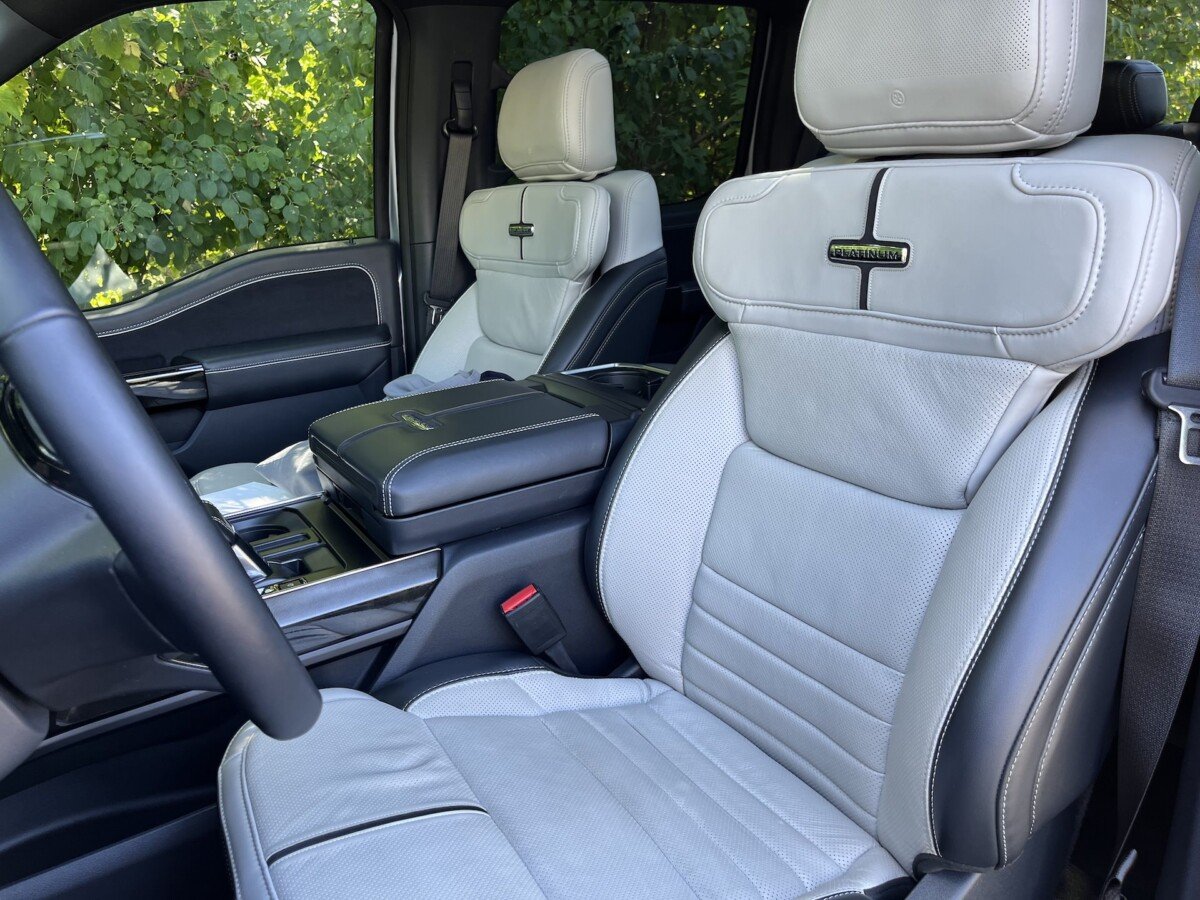 We feel good with the panoramic sunroof, the Bang & Olufsen sound system and its 18 speakers ready to spit out country music, and the rear passengers are well treated with plenty of legroom. For luggage and anything else you might want to bring, no need to make sacrifices, you can take it all.

With 885 kg of payload, the huge tipper (with electric tailgate, please) will be able to embark on a complete move. But the Lightning also hides an unprecedented secret weapon in a pick-up: the huge hood, without a big V6, frees up a 400-litre hold, the same as the trunk of a good compact sedan, to take the most important things dry. and safe.

A nice monster: this is the qualifier that comes to mind as we begin to take the measure of the machine on the roads traversing the suburbs of Detroit. Comfortable, with a little inertia, but easy and surprisingly lively, the pick-up is above all very civilized. Certainly, we feel that its suspensions are designed to support heavier loads, its rigidity is not exemplary, its direction not very direct but who cares, the approval is there, whatever the mood. 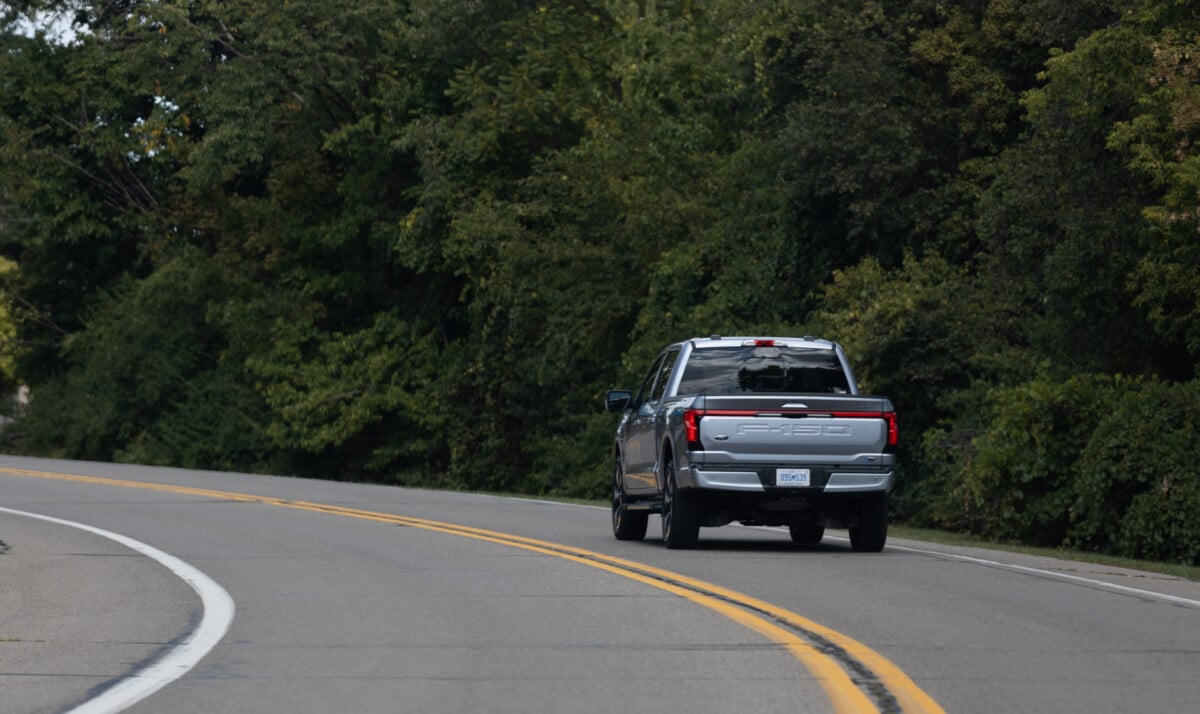 Want to glue your passengers to the seats? Check. The machine impresses with its accelerations carried out with an artificial sound for once successful. Want a smooth ride? No problem, it lends itself perfectly to this and will be able to take the children gently, without even touching the brakes, using the well-balanced one pedal function.

The behavior is more efficient and less rustic than with most of these machines, thanks to the architecture with independent rear wheels, unlike other F-150s. Almost a car, what, but almost 3 tons, with driving aids, the features that we know well with a semi-autonomous level 2 capacity which will be very useful on the highways.

Our copy is a top-of-the-range Platinum, with maximum equipment and a big, very big battery of 131 kWh useful, which requires just 41 minutes to recover from 15 to 80% thanks to its DC load of 150 kW.

In total, 75,000 charging points are accessible without needing a card (the car is recognized with the Plug & Charge system) thanks to the BlueOval service on US territory. 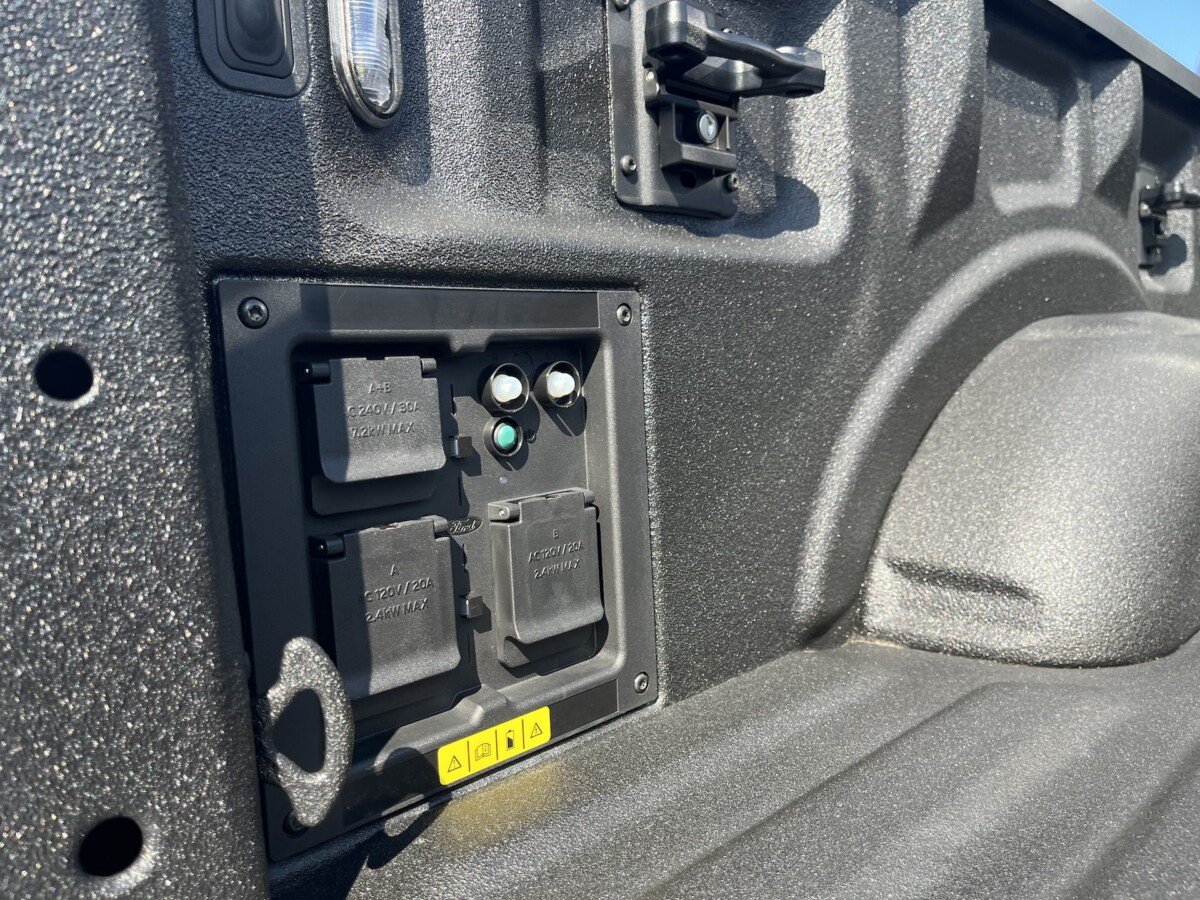 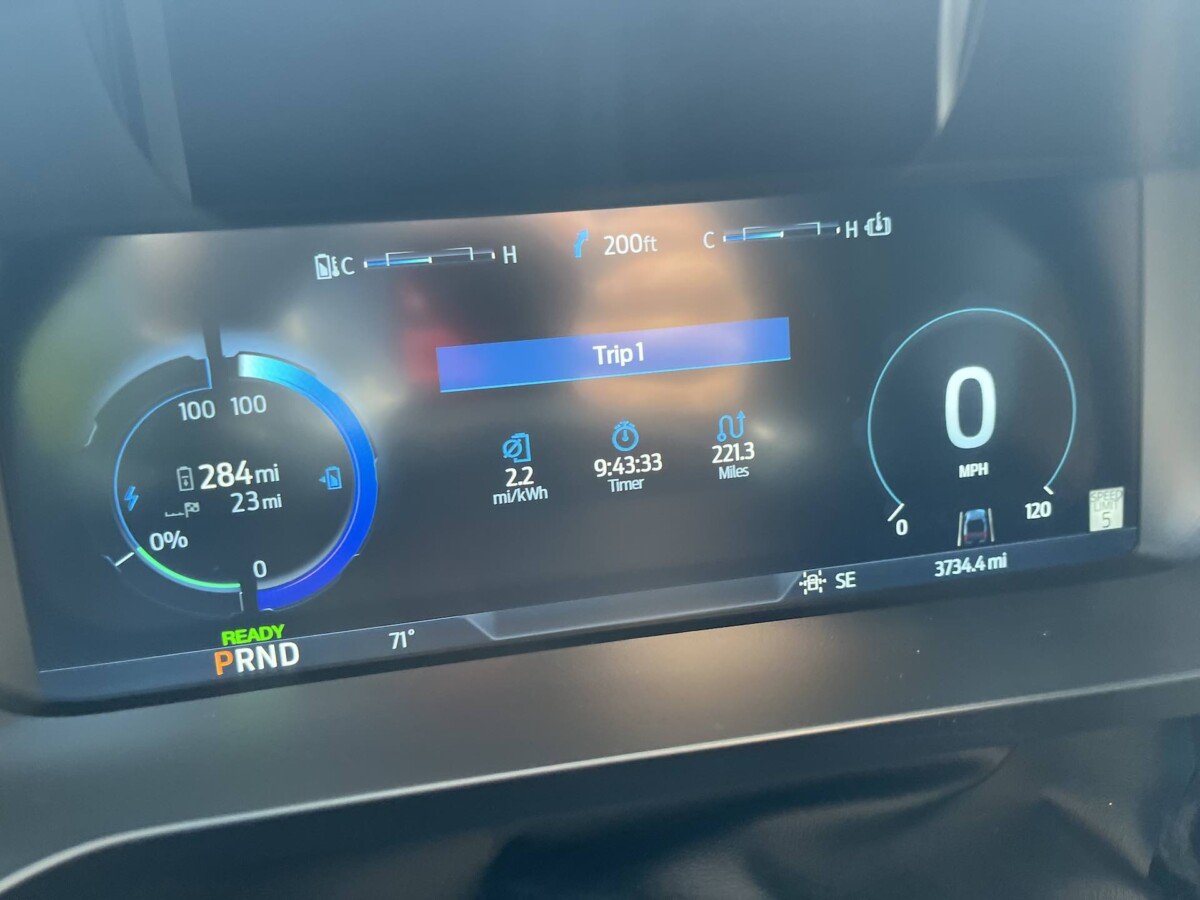 Sockets for plugging in all types of utensils (9.6 kW of power, that’s huge) with two-way charging are legion in the cabin, the frunk or the rear platform.

Its battery allows it a theoretical autonomy of 480 km, with a consumption approved according to American EPA standards of approximately 31.7 kWh / 100 km. It is enormous. For comparison, a Tesla Model X Plaid is given for 23 kWh / 100 km.

On our test, the vehicle had traveled around 355 km for an average consumption of 28 kWh.

Finally, be careful, driving in Lightning has a price, which can go from simple to double depending on the version and the on-board battery, from 50,000 dollars excluding taxes for the basic model and from 96,874 dollars for our top of the range Platinum . That is around 120,000 euros including tax if the pickup was sold in Europe.

2023 will be a year of truth for electric pick-ups, with the arrival of the Chevrolet Silverado, GMC Hummer and above all, Tesla Cybertruck, alongside specialized start-ups like Rivian with its R1T or Lordstown Motors. Let’s bet that this will give rise to good comparative tests in the US media, and that the Ford will hold its rank there.

A fratricidal fight that we will see from afar here, while our car culture, our roads and our consumption habits are light years away from this Lightning. But what a pleasant experience to have been able to appreciate the mastery of the Dearborne builder for this first test.

The Sandbox: welcome to Gucci Vault Land, the concept store with lots of gaming activities

Zinchenko is out of the squad again. Ukrainian misses Arsenal match 7

Street Fighter 6: It's not for now… And even less before Resident Evil 4 Remake!

In the new video Forspoken told about magical parkour