Call Of Duty: Modern Warfare 2, On Xbox And Pc, Crossplay Cannot Be Deactivated From The Game

Call of Duty: Modern Warfare 2 is available on PC, Xbox One, Xbox Series X | S, PS4 and PS5. It is interesting to note that it has already recorded a small record, that of the largest number of contemporary players at the launch Steam of the series. No other chapter had done better.

According to SteamDB, the maximum peak of players reached the remarkable figure of 238,522. Considering that we are talking about a title sold for € 70, it is not bad at all.

The number of Call of Duty: Modern Warfare 2 concurrent players on Steam at launch

It is currently the fifth most played game on the platform, beaten only by four well-established competitors, all of them free-to-play: Counter-Strike: Global Offensive, Dota 2, PUBG: Battlegrounds e Apex Legends.

Call of Duty: Modern Warfare 2 is among the most played on Steam

Of course, the success is also in sales: Call of Duty: Modern Warfare 2 is first in the global ranking of Steam by revenues. It is located just above the Steam Deck and Football Manager 2023. 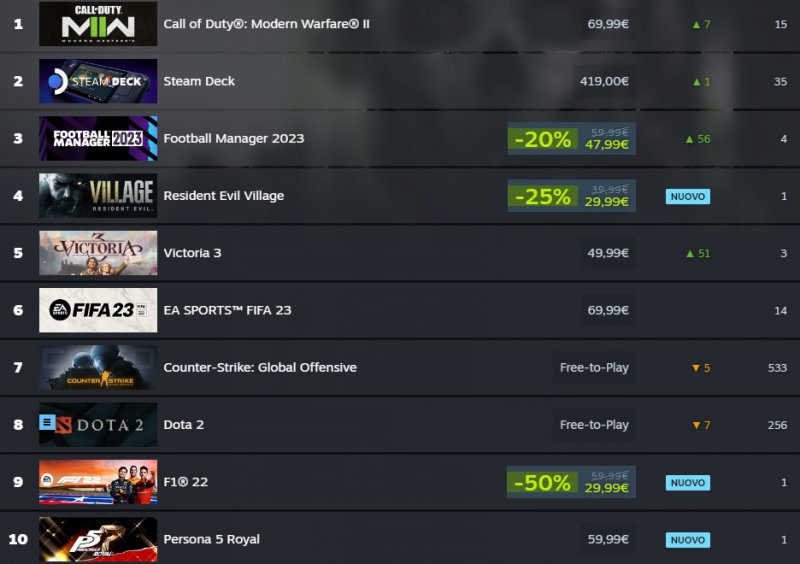 Call of Duty: Modern Warfare 2 also first in the global ranking of Steam

We are focusing on the PC version because it is the one that allows you to obtain data more easily, thanks to Steam, but we imagine that the Infinity Ward title is doing excellent results on all platforms, also given the reception of the beta and the campaign. Particularly on PlayStation, where players will be able to enjoy exclusive bonuses.

However, to celebrate the arrival of Call of Duty: Modern Warfare 2, the classic has also been released launch trailerwhich you can see below:

As you can see, the video is dedicated to the community, rather than the game itself, which has been seen a lot in recent weeks. In the various sequences that make it up we can see immortalized part of the massive marketing campaign funded by Activision Blizzard King, including commercials at the stadium, 3D billboards and so on.

What is the difference between DDR3, DDR4, DDR5: difference, compatibility, comparison