Capcom: More than 90% of sales are digital in the last 6 months

Capcom: More Than 90% Of Sales Are Digital In The Last 6 Months

There is a data of considerable interest that emerged from the financial documents of Capcom published in these days and was perhaps not highlighted that much: more than 90% of sales were digital in the last 6 months of the market for the Japanese publisher.

As reported in one of the slides of the financial report – of which we have seen decreasing earnings but still excellent sales for games – also visible below, the growth in digital sales has been dizzying, up to exceeding 90% of the total, relegating physical securities at a minimal percentage. 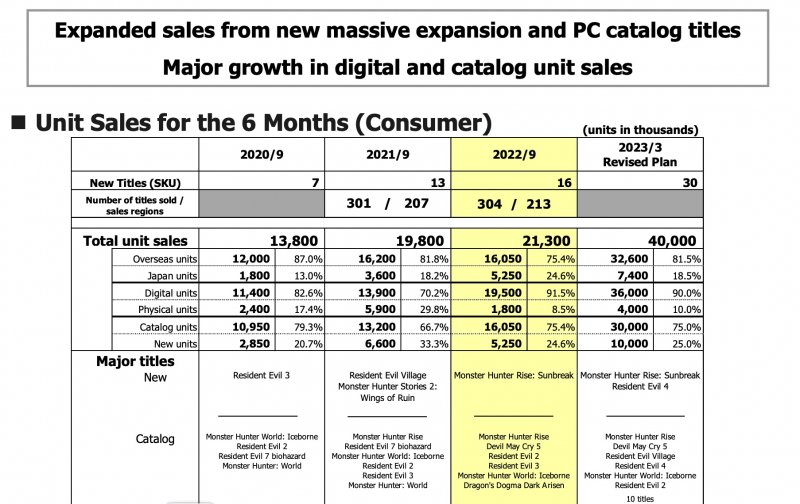 Capcom, a slide of the financial results showing the digital / physical split

To be precise, we are talking about 91.5% of digital products compared to 8.5% of physical products.

Although the trend is now consolidated, these are remarkable numbers, considering that the trend has not always been so clear: after reaching 82.6% in September 2020, the percentage of digital had dropped to 70.2% last year , which makes this year’s leap even more impressive.

This is sales figures for the 6 months that go from the end of March to the end of September 2022, a period that was in effect saw no major retail releases from Capcom. Among the most important games, in fact, there was Monster Hunter Rise: Sunbreak which is in fact a big update for Monster Hunter Rise, which could explain the percentage of digital compared to physical.

However, also with regard to the next semesterwhich ends in March 2023, Capcom plans to maintain this gap, with digital sales on 90% and 10% physical, despite the planned launch of Resident Evil 4 Remake which is expected to have its standard physical edition.

[PLUS] Adjust and calibrate your gaming monitor optimally

In honor of the imminent release of God of War: Ragnarok, the authors presented a new trailer

Starsand is leaving early access and coming to consoles in November