Hidden Sumeru and Desert Chests in Genshin Impact: Where to Find

Hidden Sumeru And Desert Chests In Genshin Impact: Where To Find 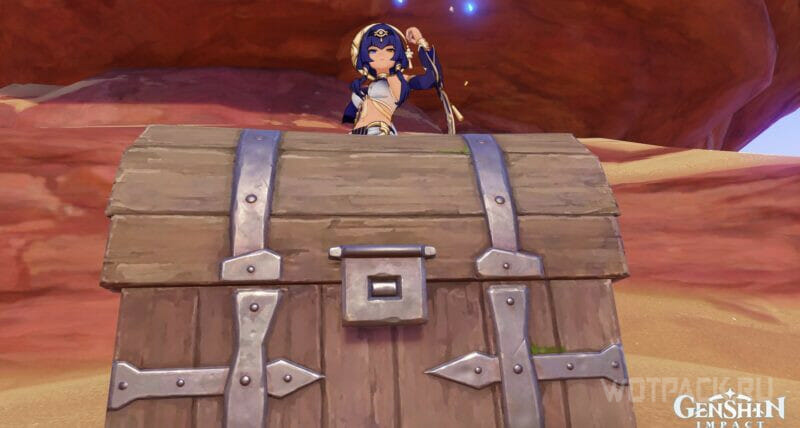 The hidden chests in Sumeru and the desert in Genshin Impact are the hardest to find. They are not sealed by the usual Dendro region puzzles, nor are they extremely difficult or impossible to see. Unobvious actions are required to open them, so Travelers often pass by riddles with hidden chests, not seeing anything remarkable in them.

The guide shows on the map and in the game all the hidden chests of the desert and Sumeru in Genshin Impact. Check it out to find all the missing treasures.

There are 18 chests hidden in the jungle in the east of the kingdom, and 8 more treasures in the sands in the west.

Take a tall hero (Dilyuk, Liza, Keia), use the four-leafed symbol and jump from a height into the river, which will allow you to reach the bottom, where the treasure is hidden – an ordinary chest.

Near the desert camp there is a field of sugar flowers with a Dendro slime in the middle. Pick all the flowers and a Dendro mushroom will appear. Defeat the enemies and a rich chest will appear.

The next reward is only unlocked in co-op. Jump with a friend on 2 springy mushrooms near the Spire of Lonely Enlightenment dungeon to get it.

Now go to the transition indicated in the screenshot below. There are 2 decorative totems here, between which two hilichurls with torches run. Break the decor elements and a regular chest will appear.

To get a hidden normal chest, go to the sugar flower near the desert camp and pick it, after which a second and third will appear on the path (facing south). After collecting all the sugars, Cryo the Jumper will appear, which must be defeated.

Chest 6: runes on the walls

To get a rich chest, start the quest Vimana-agama (Head of Roinjan) and get into a secret hideout near the village of Vimara. Here you need to light 6 runic inscriptions on the walls, coming close to them. To do this, look for gray symbols on the walls of the cave. The screenshots show their location when lit.

The next rich chest is hidden inside a cave in the area of ​​Mount Devantaki. The entrance is visible from the statue of the seven Archons.

Find the flying Anemo slimes inside, on the upper level of the cave, and shoot them one by one.

Chest 8 in the bushes

Another rich chest is hidden in the bushes in Port Ormos, on the upper level, which can be reached by the bridge.

South of the ruins of Dahri stands the house of the aranara with a vegetable garden. Harvest Sugar Blossoms, summon and defeat Jumper Cryo for a regular chest.

For the next regular chest, go down to the ruins of Dahri. Standing at the entrance to the cave, look to the southeast and see springy mushrooms. You need to successively jump on 3 mushrooms without touching the ground: from the top to the bottom.

The next regular chest is located in grove of dreams, opening from the ruins of Dahri. They told how to get there by removing the Dendro barrier in a separate article. Entering the grove, immediately look at the liana on the left: a sugar flower grows on it. Again, you need to call and defeat the jumper.

You can also go to the place from the cave of the Sleeping Roots quest.

Behind the next regular chest, teleport to the Sun and Rain Coordinates dungeon. From the room with the entrance to the dungeon, run, referring to the screenshots, until you get into a large area with mold. Climb up and approach the seemingly blocked chest.

Don’t leave the location. From the area with mold, start going back to the entrance of the dungeon. On the way you will meet springy mushrooms: jump on the 3rd without touching the ground and get a regular chest.

Return to the surface of the thicket, make sure rainy weather and climb up the outgrowth of the southernmost tree. Here you will meet Hydro Bubble. Pop it by hitting or stepping on it, and a time trial will begin, in which you need to burst 15 more in 60 seconds.

Another regular chest is given for completing the bubble challenge north in the Thicket (required rainy weather).

To the south of the Caravan Ribat, the jumper again hid under the guise of sugar flowers. For a victory, an ordinary chest is given.

Start from the teleport point east of the Alcazar-shed. First you need to get into the Hilichurl cave.

Keep to the left and exit into a large inner cavern with glowing mushrooms. At the entrance, a decorative element of hilichurls is visible. Break it down

Use the four-leaf symbols to fly over to the big mushroom cap. Other 2 decorative towers of hilichurls are visible from it. Break them too and get a regular chest.

To the north of the Abju pit there are 5 suspicious heaps of loose sand. If you blow it off, the hermits will come out. Earn a regular chest for defeating enemies.

The next regular chest is buried at the bottom of the Abju Pit. Jump to the very bottom, stand in the center: the “Dig” function will appear and 2 scorpions will come out.

Chest 21: fairy in the sand

Teleport to a point south of Haj-nisut and run east. A hillock of loose sand is visible near the road, under which the fairy hid. Blow off the sand, escort the creature and get a regular chest.

There are suspicious ruins of a house in the land of lower Setekh, furnished with pots. Break each of them, for which the game will give you an ordinary chest.

For another regular chest, defeat the Anemo Slimes.

Another regular chest is located near the Dune of Subterfuge. Treasure thieves have chosen a pile of loose sand. Defeat the mobs, blow off the Anemo with the sand skill and press “Dig”.

A regular chest is surrounded by 4 piles of loose sand. Blow off each one and get a prize.

For the last regular chest, start your journey from the Altar of Mirages dungeon. From the entrance, run along the only corridor until you meet the pedestal of secret rites. Open the door with the Red Sand Slab and exit into a vast cavernous area. Look a little to the right: Geo molders dance around the stump. Defeat the mobs and a chest will spawn.

We hope that the Genshin Impact guide to finding the hidden chests of Sumeru and the desert in Genshin Impact was clear and helped to collect the missed prizes. If you have any questions regarding the search for chests, ask them in comments. Save your favorite articles to bookmarks and stay tuned on the site: the Genshin Impact ruble is constantly updated with new articles.

A PHOTO. Svitolina showed how she walks with her newborn daughter

'Spider-Man' Remastered on PC is now 20% off

Sponsored: Save money and build a perfect audio setup yourself: Better together with Teufel!