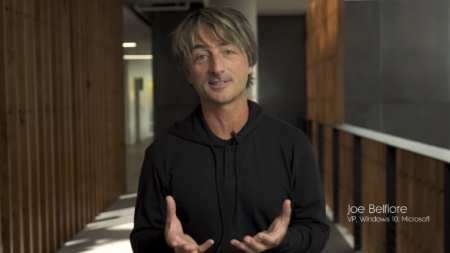 Microsoft Corporate Vice President Joe Belfiore is leaving the company after 32 years. Belfiore has held several positions at Microsoft and is currently Senior Vice President of the Office Product Group. His plans to step down were announced in an internal email sent to employees and later posted on Twitter.

Today I shared with my team that after 32 fantastic years (!) I’ll be retiring from @Microsoft!

What’s next? 1) I’m staying on until summer to help with the transition (SO MUCH GOODNESS COMING), then 2) focus on the two kids still at home & the 1 who just started college. 🙂

Belfiore will continue in the role of Senior Advisor and Trainer until the summer of 2023 to help during the transition period. The Office Product Group will now be led by Executive Vice President Ales Holecek, who led the division with Belfiore for several years. He will be accompanied by Executive Vice President Sumit Chauhan, who will be promoted from his current position as head of the Office Organization.

In 2018, during another company reorganization, Belfiore moved to a new position, leading the Essential Products Group, which included Windows 10, Microsoft Edge, Surface software and several mobile applications. He then became head of the Office Product Group, where he has continued to work until the present day.

Belfiore explained on Twitter that after leaving Microsoft, he will focus on spending time with his family. Sometimes in the corporate world, this phrase means a forced exit. But according to ZDNet, Belfiore’s resignation was a personal decision, and the priorities of the Office team will not change after his departure. In 2015 and 2020, Belfiore went on long vacations to spend time with his family.

Assassin's Creed Invictus: new details from the Ubisoft report on the multiplayer game

Noctua strongly advises: salt in thermal paste is not a good idea

Columns are going to be screens in new cars!