Nothing ear (Stick) test: our opinion on these earphones with an original design – Frandroid

Nothing Ear (stick) Test: Our Opinion On These Earphones With An Original Design – Frandroid

Teased a few months ago during Paris Fashion Week, where their tubular case was fleetingly shown, the new Nothing headphones are now available. Unlike Nothing ears (1) which were inserted into the ear canal to better isolate the listener from surrounding noise, while offering active noise reduction, Nothing ears (Stick) are positioned at the entrance to the ear and are aimed at customers looking for greater wearing comfort.

This test was carried out with headphones lent by Nothing.

The undeniable success of Nothing ear headphones (Stick) is their design. Although their shape is rather conventional, the partial transparency of the rods makes them look like no other. Compactness, generously rounded shells, fine aluminum grilles, a little touch of red to recognize left and right earphones, everything contributes to making the Ear (Stick) rather attractive. 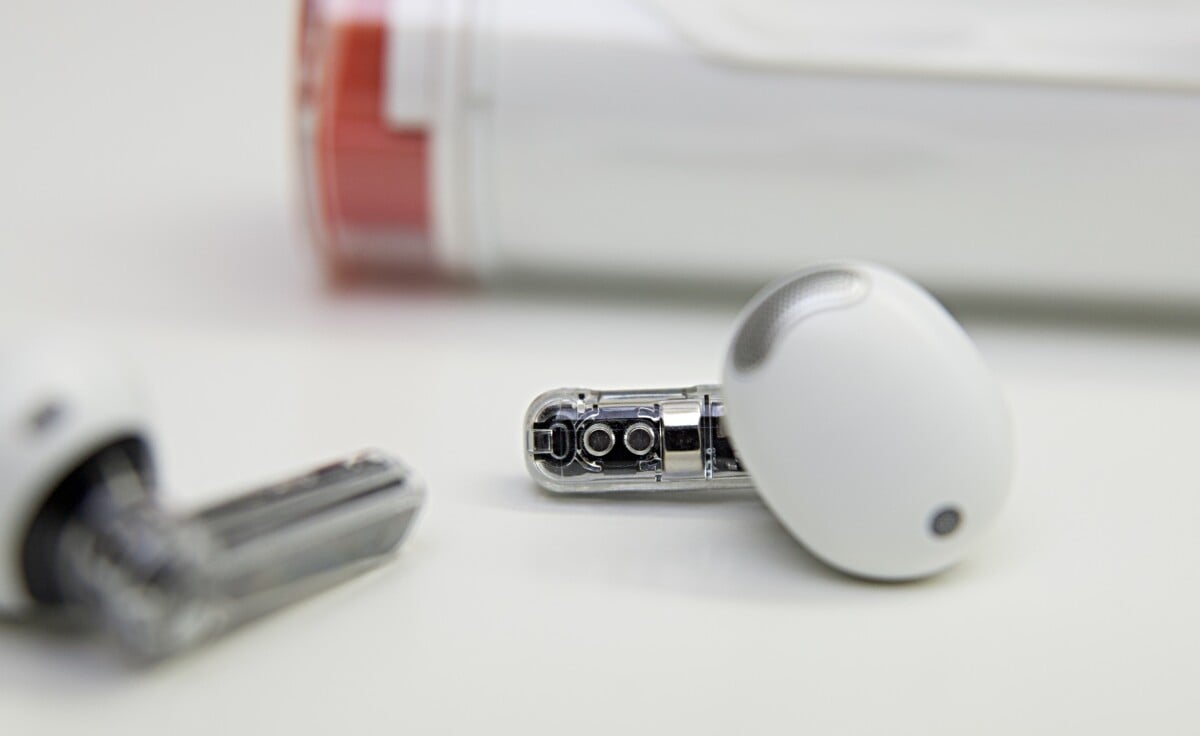 The stems of the headphones are transparent // Source: Tristan Jacquel for Frandroid

In terms of ergonomics, it is also a success since the headphones are easily installed in the ears, without the need to look for an optimal position. The wide shells make them easier to grip and avoid having to handle the rods, which incorporate the touch control zones. Wearing comfort is excellent and causes absolutely no fatigue. You can also shake your head, without risking losing the headphones or making them move too much. The (Stick) are IP54 certified, and are therefore resistant to water splashes and dust, but not to complete immersion. 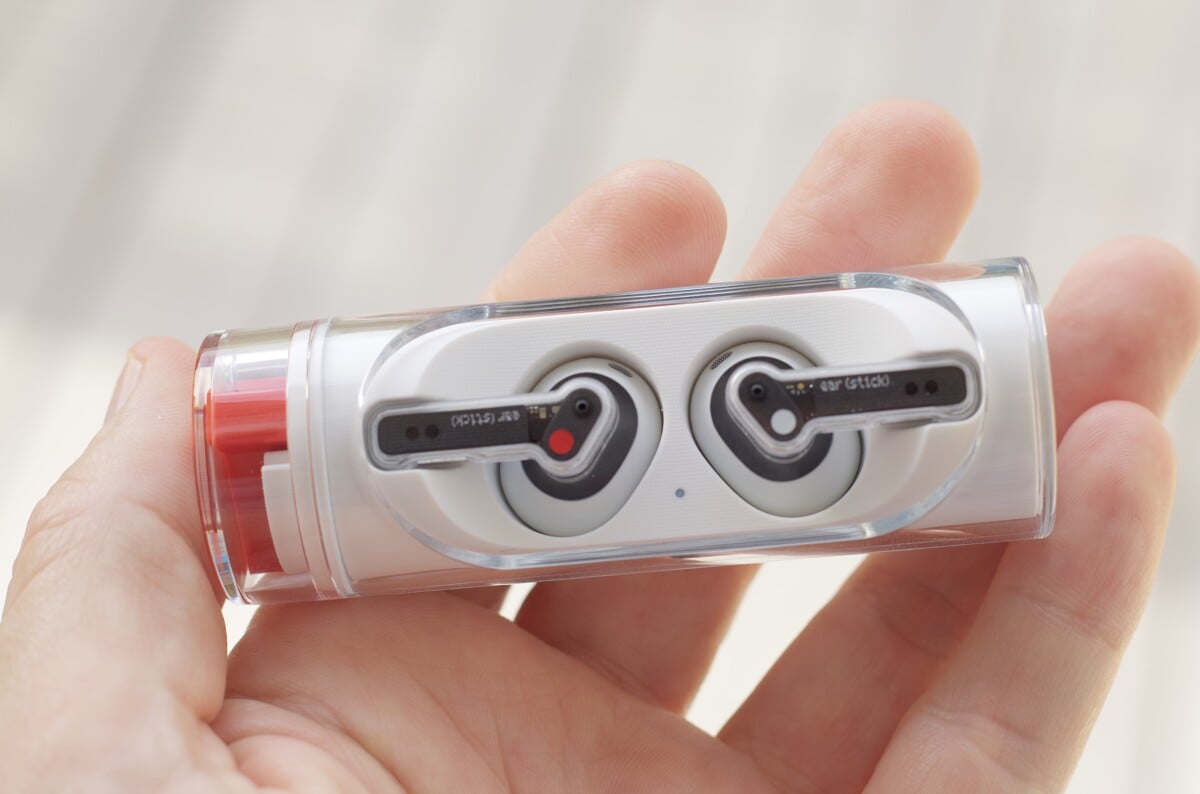 The cylindrical charging case is rather compact // Source: Tristan Jacquel for Frandroid

The charging case is the chef’s surprise, with its cylindrical shape and lipstick tube opening. The headphones are secured there by magnetization and easy to extract. The case is recharged using a USB-C cable. It is also the only accessory provided by the manufacturer, in addition to a brief manual.

The headphones each have a touch control area, which reacts to pressure. To use, simply grasp the rod between thumb and forefinger and squeeze firmly. One press pauses or restarts playback, two to go to the next music track and three to the previous one. Invoking the voice assistant of the smartphone is possible, but you have to associate this action yourself with one of the touch zones of the headphones, directly in the app. 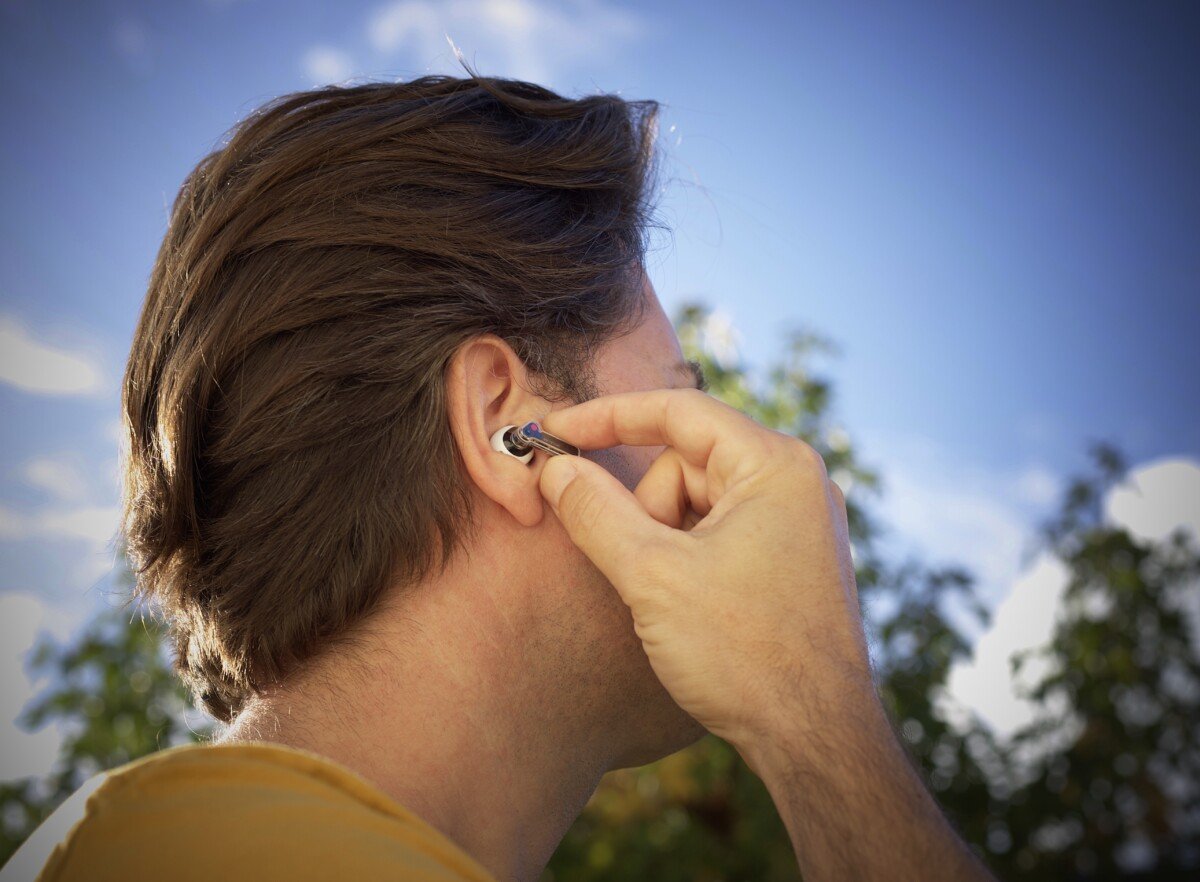 Each earbud has a port sensor to pause playback when removed. Then simply reinstall them for playback to resume. Failing this, the Nothing ear (Stick) goes into standby automatically after a few minutes, to preserve their batteries.

The touch zones can be reprogrammed separately.

You have to long press to adjust the volume.

Port detection can be disabled.

The Nothing X application for Android (there is currently no version for iOS) provides access to an equalizer, which allows you to adjust the volume of three frequency registers, as well as to activate low latency mode. If you have a Nothing smartphone, the headphones will automatically switch to low latency mode when a game is launched, to reduce the lag between image and sound. For watching movies and series, don’t worry, the synchronization is always perfect, whatever the device used.

Bluetooth pairing is compatible with the Google Fast Pair protocol and the headphones thus declare themselves spontaneously to the first nearby smartphone. They are then available on all devices linked to the same Google account.

Throughout this test, the headphones maintained a flawless connection, even 10 meters from the smartphone and through a floor and a thin partition.

Nothing ear headphones (Stick) are equipped with dynamic transducers 12.6 mm in diameter, a fairly large size which, in theory, allows the intensity of low frequencies to be increased. 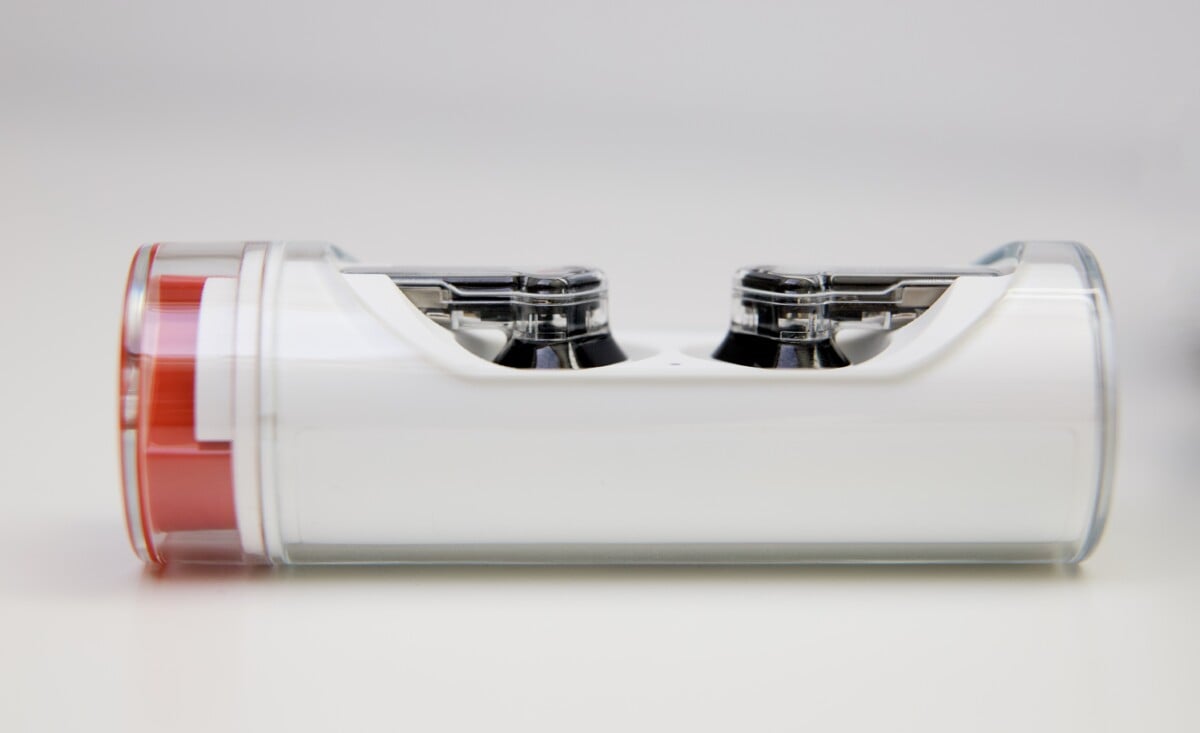 Nothing ear headphones (Stick) in their charging case // Source: Tristan Jacquel for Frandroid

Nothing also announces that its headphones have an automatic bass sound loss compensation function, called Bass Lock. As for the supported codecs, they are limited to SBC and AAC.

I tested the Nothing ear headphones (Stick) with a Huawei P30 Pro smartphone and an iPhone 13 Pro Max, from Apple Music.

We are not going to put open headphones on trial, but it must be recognized that, apart from undeniable wearing comfort – that is already good – they are of absolutely no acoustic interest. On the contrary even. Not sealing the ear canal systematically penalizes the reproduction of low frequencies, which collapse in favor of the higher ones. The sound signature of Nothing ear (1) thus appears unbalanced and you have to play the equalizer in the app to add a little body to the whole. Also, the poor passive isolation lets everything going on around you be heard, which doesn’t help to immerse yourself in the music. It is therefore better to use the Nothing ear (Stick) in a (very) calm environment. 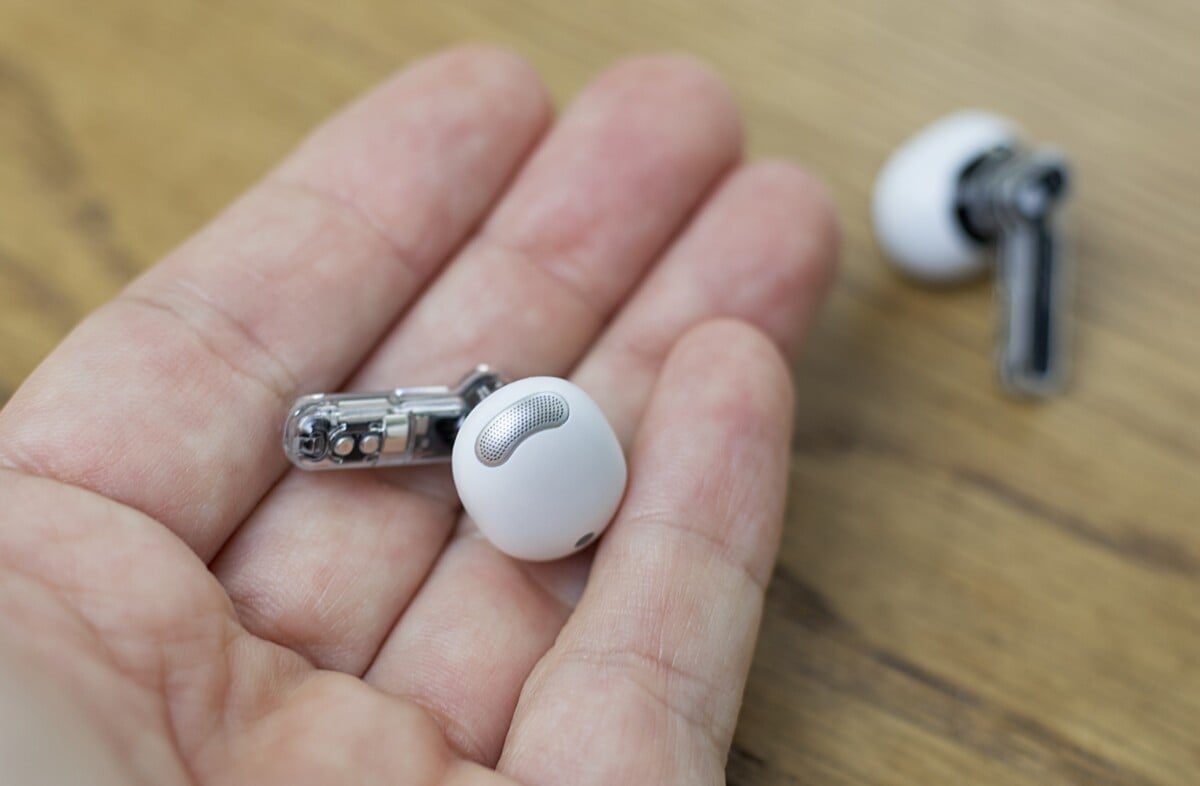 The headphones are equipped with several microphones hidden behind protective grilles // Source: Tristan Jacquel for Frandroid

Their sound signature is therefore distinguished by the weakness of the low frequencies, which are perceived in an unbalanced way. The impacts are there, but the extension to absent subscribers. It’s a shame, because we feel the transducers quite capable of going down quite low. Moreover, when they are voluntarily placed against the ear canal, the bass is immediately more opulent. But back to their natural position, he backs off. As for the frequencies of the mid register, they are irregular, with a nice bump around 1 to 2 kHz, which brings a marked coloration. This peak emphasizes human voices well – it’s nice for listening to movies and series – but overexposes the percussion. At high volume, sibilants are heard and taint the restitution. Too bad, because the treble is well placed and rather silky.

Bass: depends on the position of the earphones in the ear, but generally set back and not very nuanced Midrange: very prominent and colourful, aggressive at high volume Treble: soft and fine, but partly masked by the midrange 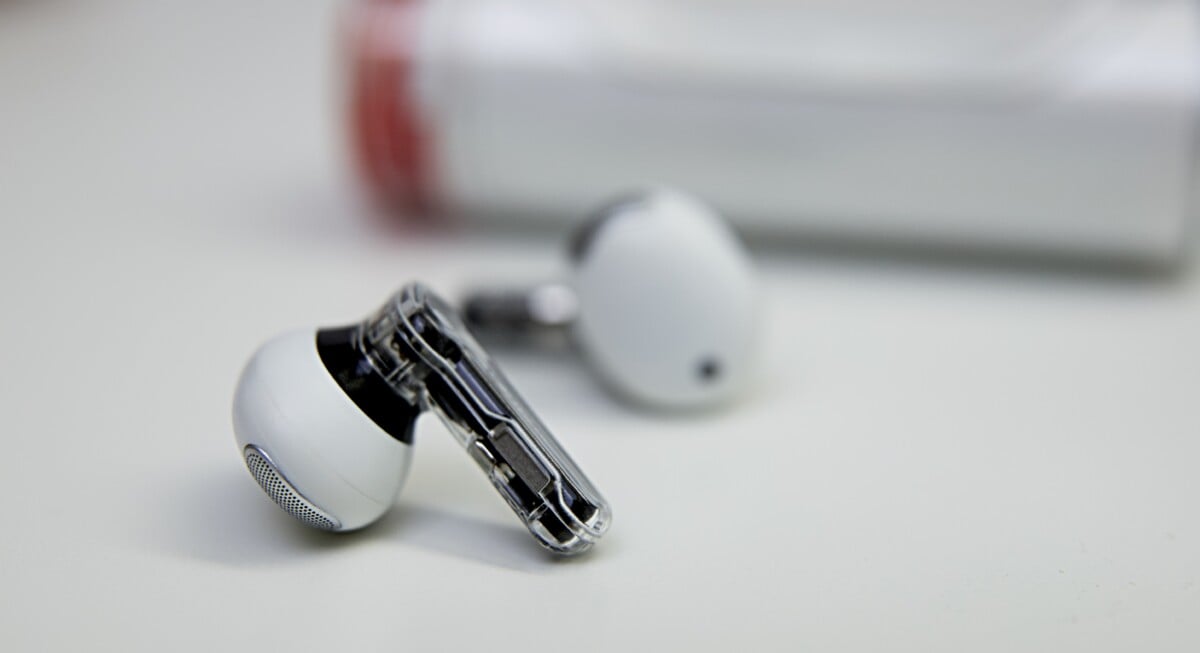 Note: the mysterious Bass Lock technology, supposed to correct the level of low frequencies according to the position of the headphones in the ears, does not seem to work. When they slip a little, the bass is not reinforced or, conversely, if you push the earphones in, which artificially inflates the rendering, the bass is not degreased.

The Nothing ear (Stick) plant a fairly wide soundstage and that’s a good point. On the other hand, it is shallow, again the fault of an overexposure of sounds in the midrange. The layering of the sound plans lacks aeration, without being completely messy, except on complex titles. Just Dance by Lady Gaga or Rock is Dead by Marylin Manson are unfortunately a painful ordeal.

Three microphones associated with environmental noise reduction algorithms are used during audio calls with the Nothing ear (Stick) earphones. However, the capture is of average quality, with marked compression and pronounced masking of high frequencies, when parasitic noise is reduced. 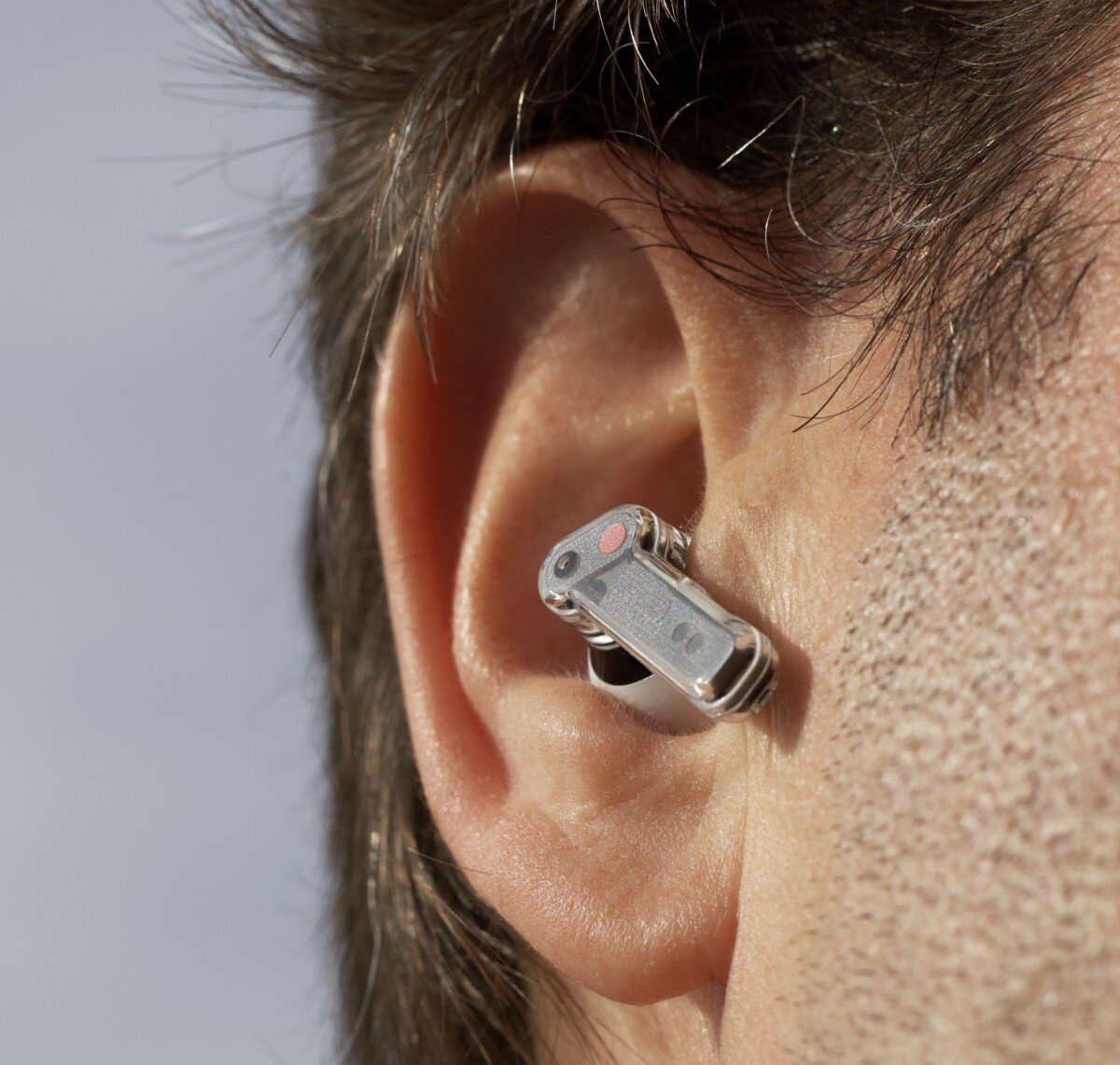 The Nothing ear (Stick) hold perfectly in place // Source: Tristan Jacquel for Frandroid

We are therefore misunderstood by our interlocutor, whom we also hear moderately, for example in the street, because of the open format of the headphones. The ideal is therefore to make calls with the ear (Stick) in a quiet environment.

Nothing announces an autonomy of 7 hours for the ears (Stick) and I measured 6h50 at 50% of the volume of my Android smartphone. Mission accomplished from this point of view. Charging time for the headphones is around 2 hours, with a quick charge for 10 minutes returning 2 hours of battery life. The case allows three consecutive charges before it is necessary to recharge it too.

Nothing ear headphones (Stick) are offered at a price of 119 euros.

Where to buy The
Nothing ear (Stick) at the best price?

Samsung is introducing an option to protect data during phone repair