Describing the current state of affairs with the development of new technical processes, Intel management at the quarterly reporting conference avoided new ambitious statements, confining itself to mentioning that it continues to believe in its ability to regain technological leadership by 2025. Along the way, it was said that for the needs of third-party customers, the Intel 18A process technology is more suitable, and the company will use the previous Intel 20A mainly itself. 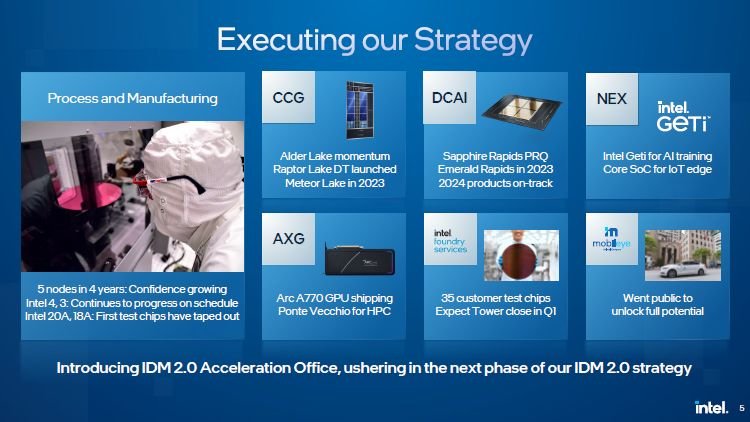 With Intel facing $8-10 billion a year in cost cuts over the next few years, CFO David Zinsner was forced to clarify that this would have a minimal impact on the amount of investment in manufacturing development and the development of new technical processes. In fact, in the next couple of years, the share of capital expenditures will reach 35% of revenue before falling to the more usual 25%.

Intel 20A technology will use a new RibbonFET transistor structure, and in this regard, the company expects to maintain its status as an innovator in the semiconductor industry, as indicated by CEO Patrick Gelsinger. The development of the Intel 20A process technology is proceeding in accordance with the planned schedule, and the head of the company believes that it will be used primarily for its own needs. With the transition to the Intel 18A by mid-decade, the number of third-party customers interested in using this new lithography stage will increase substantially.

As Gelsinger emphasized, the formation of a digital project for the Intel 18A process technology for a large external customer has already been completed, and the first working prototypes are available. Judging by the early statements of Intel, we are talking about a product for the needs of the US Department of Defense, which will be produced at a facility under construction in Ohio. In addition, the company already has test samples for its own needs, released on Intel 18A technology. In the future, several more Intel customers will receive test chips manufactured using this process technology. According to Gelsinger, based on the test results of these samples, they will be able to make a decision about the feasibility of serial production by Intel.

NBA. Sacramento lost to Memphis, Lan made 1 rebound in 3 minutes