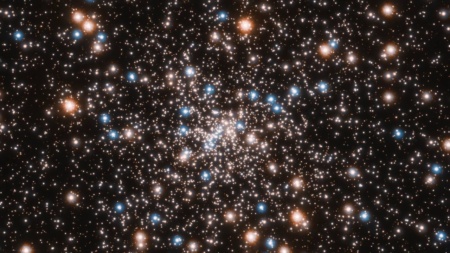 Some of the behaviors of star clusters challenge our current understanding of cosmic gravity and support an alternative theory of gravity that, in turn, denies the existence of dark matter.

The law of universal gravitation is a physical law that describes the gravitational interaction within the framework of Newtonian mechanics. The law states that the force of attraction between two bodies (material points) is directly proportional to the product of their masses, and inversely proportional to the square of the distance between them. still explains well the large-scale structure and motions of the universe, although it has been superseded by general relativity

General relativity is a theory of gravity published by Albert Einstein in 1916. Unlike Newton’s non-relativistic theory of gravity, general relativity is suitable for describing the gravitational interaction of moving bodies with speeds close to the speed of light. However, the latest observations of an international group of astrophysicists do not correspond to any of these models.

The researchers studied open star clusters (in which thousands of new stars are born from a large cloud of dust and gas) – they have a relatively short lifespan, as stars move into tails after birth (one in front and one behind the cluster). 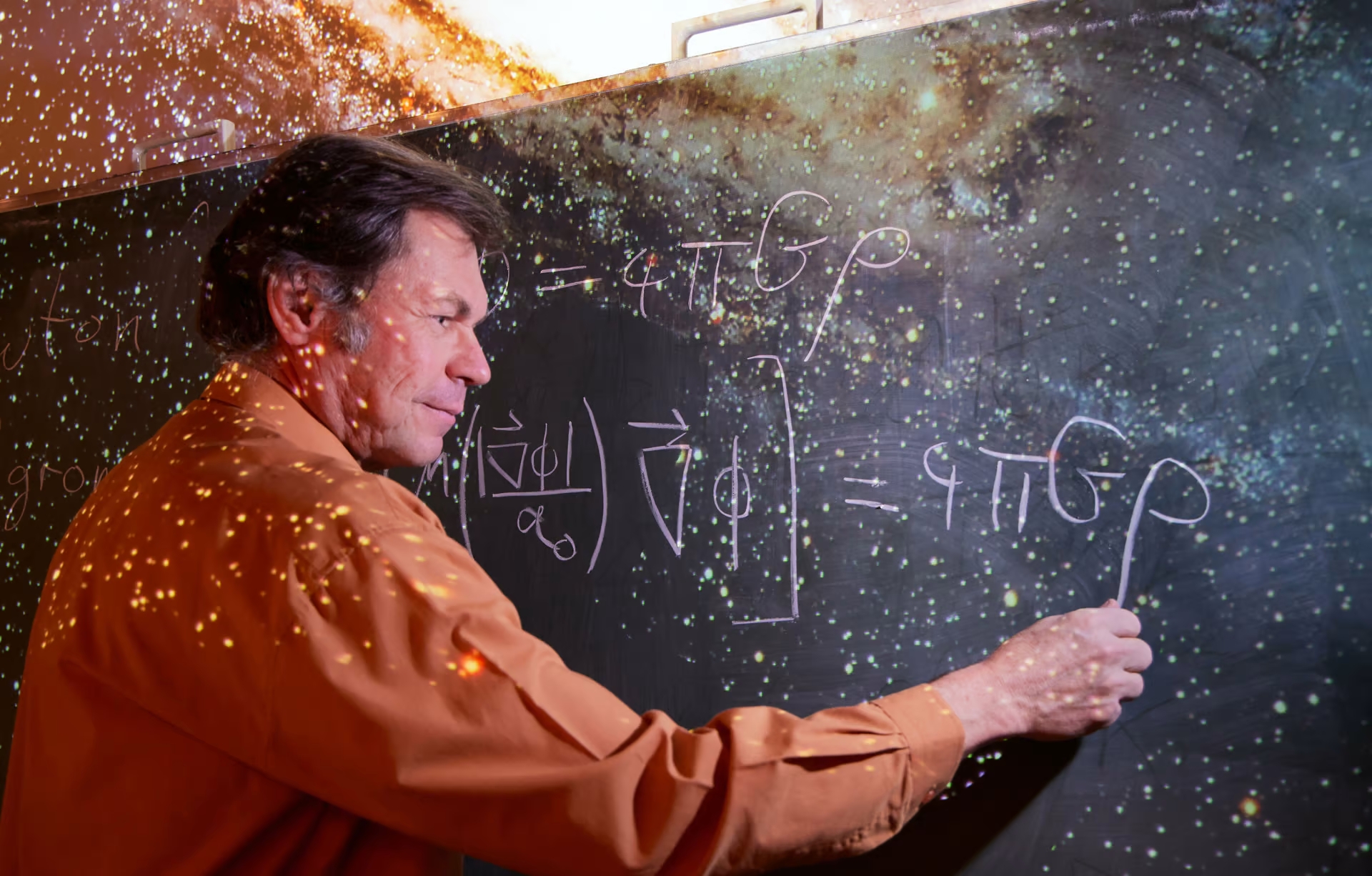 According to Newton’s law of gravity, the distribution of stars in their tails is a matter of chance. However, scientists’ observations disproved this model.

“In the clusters we observed, the foretail always contained significantly more stars than the trailing tail,” says Dr. Jan Pflamm-Altenburg, co-author of the study.

Previously, it was considered impossible to determine whether a cluster star belongs to one of the tails, but scientists have developed a special method for this – the Dzherabkova compact vanishing point method. It was applied to data on four open star clusters collected, including with the help of the Gaia mission.

Gaia (Global Astrometric Interferometer for Astrophysics) is the European Space Agency’s optical space telescope, the successor to the Hipparcos project. Its main task is to compile a detailed map of the distribution of stars in our Galaxy. It turned out that in all four objects of observation, there were significantly more stars in the forward tail than in the rear – which clearly contradicted Newton’s laws.

Next, the team modeled the movements of stars in these clusters in accordance with another hypothesis – modified Newtonian dynamics.

Modified Newtonian dynamics (MOND) is a physical hypothesis, an alternative theory of gravity that proposes a change in Newton’s law of gravity to explain the rotation of galaxies without involving dark matter. (MOND).

“According to MOND, stars can leave the cluster through two different exits: one leads to the rear tail, the other to the front. However, the first exit is much narrower than the second – so the likelihood that the star will leave the cluster through it is less. On the other hand, Newton’s theory of gravity predicts that both exits should be the same width,” says Prof. Pavel Krupa, first author of the study.

Star clusters in nearby galaxies have also been found to dissolve faster than Newton’s laws predict. 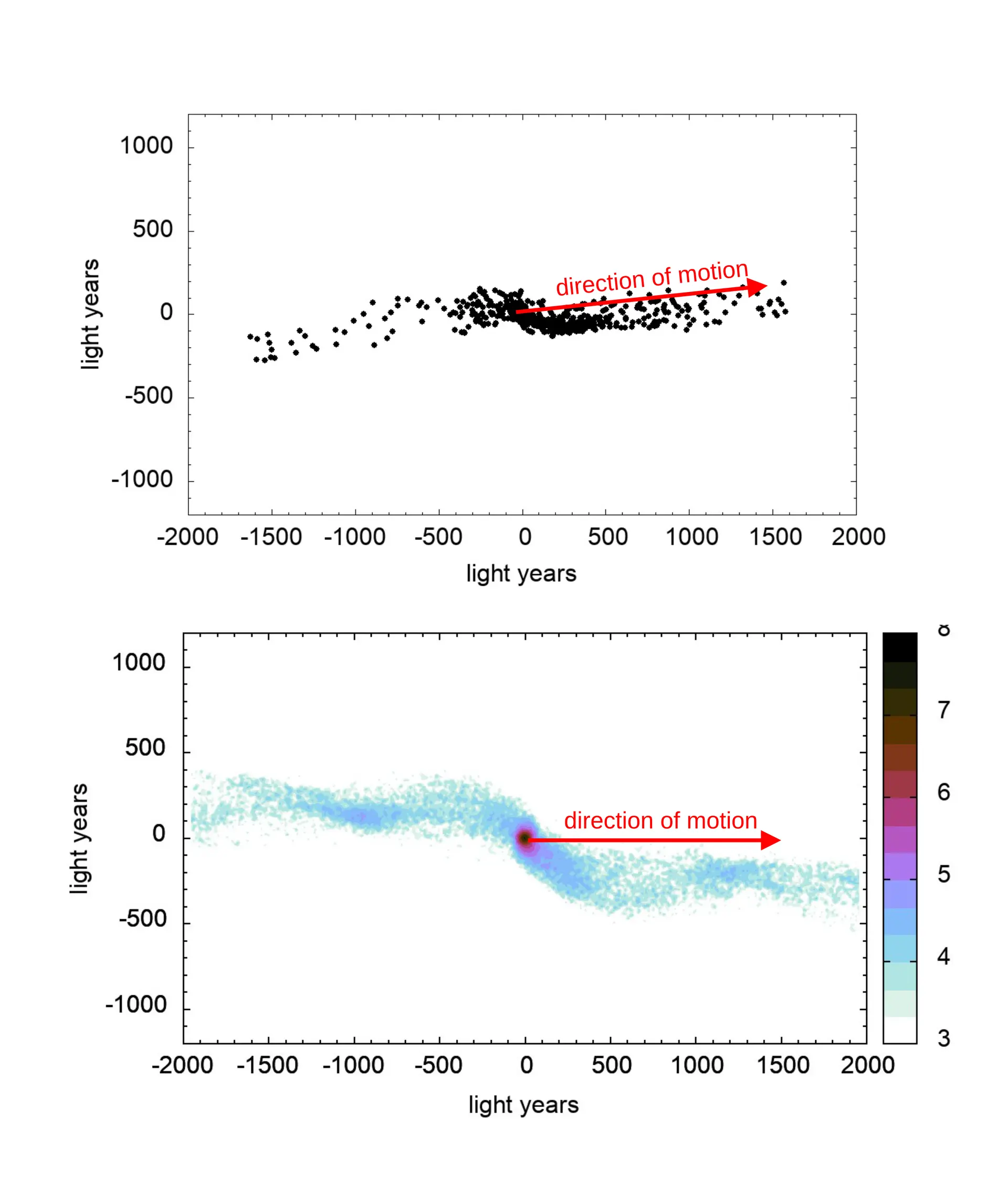 Above: Graph of the distribution of stars in the Hyades Cluster (an open star cluster in the constellation Taurus located 150 light-years from Earth – visible to the naked eye). Bottom: Computer simulation of MOND showing a similar distribution

The most important conclusion of this whole study may shake the current astrophysics. The processes corresponding to MOND negate the need for the existence of dark matter.

This form of matter was invented in the 1930s to explain the discrepancies in the motion of stars and galaxies – they were seen to move too fast for the mass they seemed to contain. It is dark matter that fills this gap by adding a huge amount of invisible mass. Since then, scientists have been looking for it, but decades of experiments aimed at detecting dark matter particles have come to nothing.

Oxford physicists have confused atomic clocks and improved their accuracy: if dark matter exists, we are one step closer to detecting it

However, dark matter is the prevailing theory because it explains many features of the universe very well, and there is plenty of other evidence pointing to its existence. Although there have been other observational data supporting MOND, modified Newtonian dynamics is a minor hypothesis that has not been widely accepted in the scientific community.

Astrophysicists are currently exploring other methods to create more accurate simulations that could then be applied to other astronomical objects to find more evidence for or against MOND.

Pokémon Scarlet / Violet, day and night cycle: how to change the time in game?