A Plague Tale: Requiem – A technical masterpiece that pushes the consoles to their limits

A Plague Tale: Requiem – A Technical Masterpiece That Pushes The Consoles To Their Limits

Two years after launch, games made exclusively for PC, PS5 and Xbox Series X/S are still relatively rare and something to enjoy. A Plague Tale: Requiem from developer Asobo Studio is a beautiful game that actually feels like a generational leap from its predecessor. We’re looking at the console versions today, although the PC version technically pushes the game even further. As for that, let’s wait and see what the upcoming ray tracing upgrade brings before we dive deeper into this version.

Technically, mechanically and even narratively, Requiem is a massive improvement over the already impressive first installment. The mix of sneaking and puzzle-solving is also the focus here, but it’s more robust and varied. And you have bigger levels that you can carve your own way through. The graphics are an immense improvement with an exceptional level of detail, phenomenal material work and absolutely sublime lighting. And then there are the swarms of rats that are typical of the series. In the original, the Asobo engine conjured 5,000 rats onto the screen at once, with the level of detail diminishing the farther away you went. But now? In the sequel, there are even 300,000 rats. And the team modified their movements to look more like a tidal wave as they smash through chokepoints.

It’s clear the team is making the most of the jump to the new hardware. On the PS5 and Series X, Asobo Studio has the power to transform the levels into huge, sprawling areas. You get more freedom of action. But the scenery is also much more detailed. Looking at the first area of ​​Requiem, you can see more foliage rendered far, far into the distance. The interaction of the materials with the light is of a higher quality, both indoors and outdoors. There’s more complex geometry and a higher density of objects scattered across the playfield, plus parallax occlusion mapping.

A few other details also stand out: the crisp skybox is stunning, with its large overviews of cityscapes. Even the initial market area feels bustling with a large number of NPCs, a vast improvement over the original game’s sparsely populated towns. The quality of the character models has also improved significantly. In both geometry and materials, our main character Amicia’s close-up shows increased texture resolution for clothing, improved skin shaders, and more complex hair. In areas of the game that are often lit by torches, the interplay of materials and lighting in Requiem is quite the spectacle this time.

The image quality values ​​largely correspond to those of the first game. Both the PS5 and Series X stay at a native resolution of 1440p and reconstruct the image to 4K with a temporal solution. For the Xbox Series S, like Innocence, we’re sticking with a native 900p. The result is that nothing is lost or gained in terms of pixel metrics. It’s clear that the sequel is banking on higher settings and larger environments to leverage the systems’ resources. If we compare the Series S directly to the Series X, there are a few settings that are omitted for the weaker device. Ambient blur is reduced, resulting in less shaded foliage, while foliage generally appears less dense from a distance. Otherwise, it’s the same game across all three platforms, although the PS5 makes good use of the DualSense adaptive triggers. 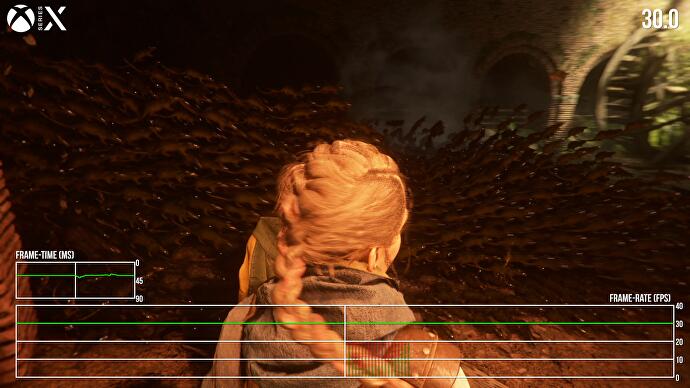 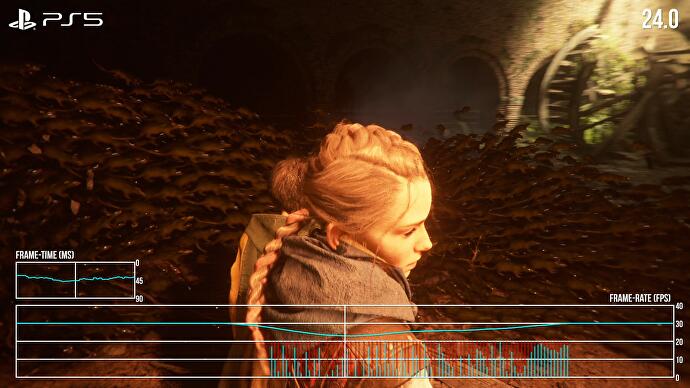 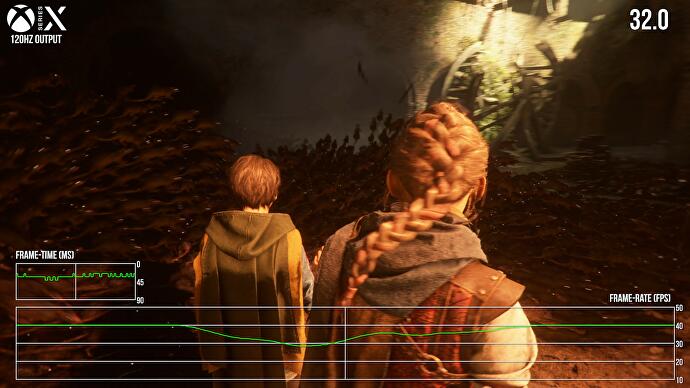 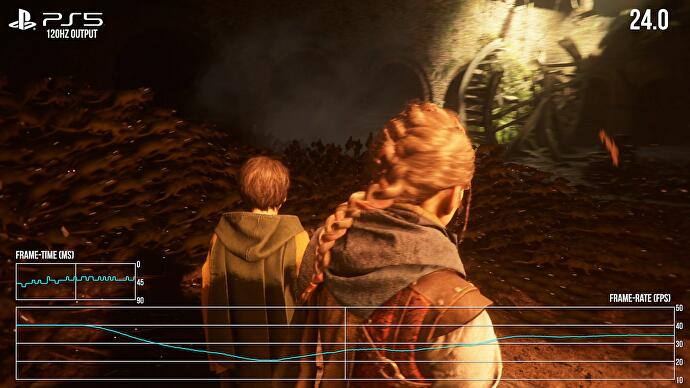 Rats are a real stress test for the consoles. The Xbox Series X sticks to 30fps, but the 120Hz mode (limited to 40fps) shows how close to the limit it is. However, the PlayStation 5 has a few issues in both 30fps and 40fps modes.

Performance is a bit debatable, as not only does the game aim for 30 frames per second, it can fall below it. At least the 30fps refresh is smooth, with adaptive screen tearing kicking in on all three games when the engine is stressed. I would also like to point out that 95 percent of the time you can get a smooth 30 fps here without any problems. The Xbox Series X has the best and most consistent performance of the three devices, and I’ve seen little more than a single frame drop here, even on the most demanding spots. The appearance of rats is typically a major point of stress in the game and on the Series X there is hardly any drop in frame rate. The picture isn’t quite as pretty on the PlayStation 5, however, as it offers a less stable, but overall still very solid 30fps version.

If we pick out the worst points for comparison, scenes with masses of rats and guards in outdoor areas cause the biggest problems on the Sony device. The Series X’s stable 30 fps also falls well into the mid-20s on the PS5 in areas with strong transparency effects – like fire. Most of the game still runs at 30fps, but the dips will be much more regular on the PS5 in its current state. Oddly enough, the Series S version falls between the two big versions. It’s closer to the Series X in terms of overall consistency, again with the exception of select moments where there’s a huge surge in rat numbers. In terms of performance, the choice of 900p on the Series S seems well considered and an advantage for the balance between graphics and frame rate.

There is one quirk though: when you run the game on a 120Hz screen, the framerate target changes to 40 frames per second, not 30, while maintaining the same pixel count. On the Series X, portions of the game run smoothly at the full 40fps cap, although we can also see why 30fps is the more realistic goal on console. Areas of heavy shelling, the fortress with all the guards and rats in view, the sudden swarms of rats: all of this brings the Series X close to the 30fps limit or at least briefly capping it. 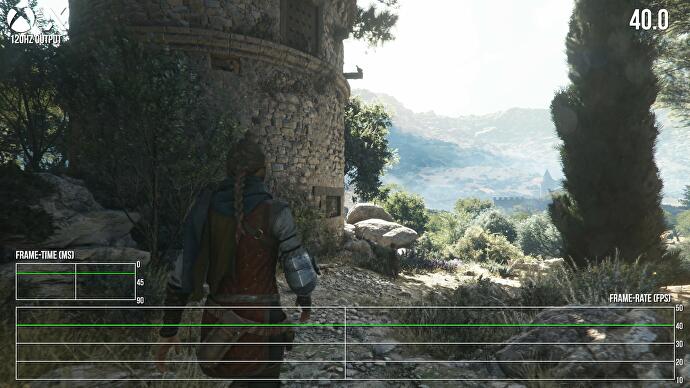 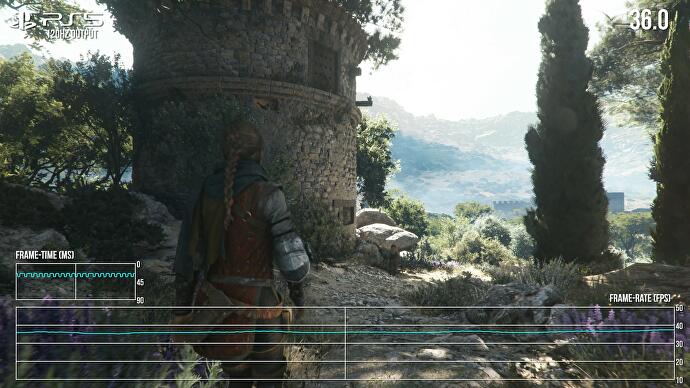 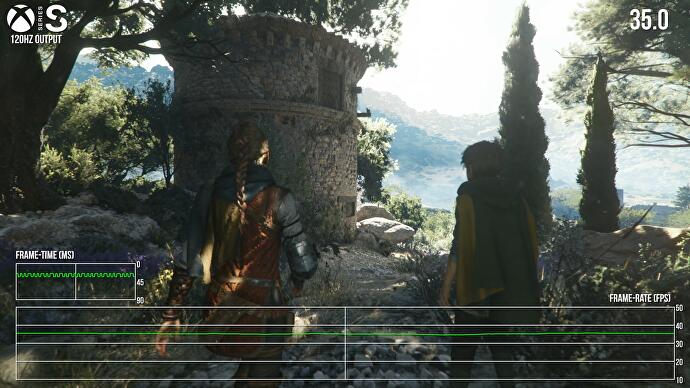 The opening sequence appears to be GPU limited on Series S and here on PS5 at 40fps mode. Only the Series X hits the framerate target.

That’s not ideal, of course, but it realistically shows how far these consoles are from 60 fps. The PS5 is, as expected, even further from hitting a stable 40fps, and it can even slip into the 20s in stressful situations. And even with the Series S, where the stability of 40fps just isn’t there outside of the quieter urban moments, you could argue that 30fps on a 60Hz screen is the better option overall. The fact that a 40fps target is available is welcome, but dynamic resolution scaling could have helped both the 30fps and 40fps modes overall.

Performance shouldn’t be the last word we have on A Plague Tale: Requiem. The game is truly a technical feat, a real eye-catcher on the PS5 and Series X. Asobo’s latest game is remarkably solid in its mechanics and boasts a great story. As far as console recommendations go, if you have the choice, go for the Series X version. If only for the reason that it is more stable. The PS5 version runs acceptably overall, just expect obvious performance hits at the height of the action. I’m seriously hoping for a solution because usually the difference between the two versions isn’t that obvious on multi-platform versions. And as for the Series S, it’s a well-done version overall, with only the blurrier image quality detracting from its many assets.

Better performance at 30fps would be desirable, as would more stable 40fps display for 120Hz screens, but if you’re looking for a truly stunning game that shows what the latest consoles are capable of , A Plague Tale: Requiem is highly recommended.

PlayStation Plus is free this weekend: free multiplayer on PS4 and PS5