NASA has published a photo with the “smile” of the Sun, but it is unlikely that it is friendly – geomagnetic storms will cover the Earth this weekend

Nasa Has Published A Photo With The “smile” Of The Sun, But It Is Unlikely That It Is Friendly – Geomagnetic Storms Will Cover The Earth This Weekend 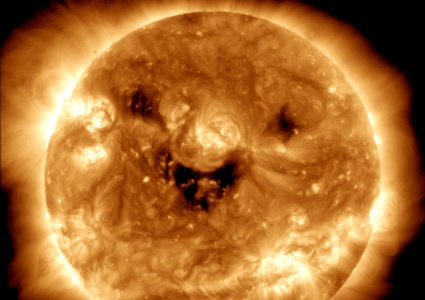 NASA’s Solar Dynamics Observatory on October 26 recorded three dark spots that appeared in the Sun’s atmosphere – they are located as if two eyes and a mouth on the “star’s face”. At first glance, it may seem that the Sun smiles sweetly at us. But this is only at first glance.

They say when you smile, the world smiles with you. When the sun smiles, the world is bathed in plasma. The three sunspots detected by NASA’s Solar Dynamics Observatory (a satellite that has been recording solar activity since February 2010) and forming a smile on an image of the Sun are actually coronal holes.

A coronal hole is a region in the solar corona

The solar corona is the outer part of the Sun’s atmosphere, which is tracked to a distance of almost two solar radii from the solar photosphere. The solar plasma in this part has a low density and is heated to temperatures of several million kelvins. or the most distant atmosphere from where the solar wind

The Muppet Show is an Anglo-American television comedy program created by Jim Henson. It came out in 1976-1981. The main characters were Muppets. on Mars.

While the global dust storm has obscured much of the surface, we’ve still been able to get some good images of the polar region. (247 km above the surface)

PS5: Check a date for the integration of Discord and its voice chat

Bayonetta 3, Digital Foundry destroys the technical side of the game: 'Worse than on old-gen'

Realme GT 2 Pro 5G: this high-end smartphone is on sale!

Xbox: According to Phil Spencer, consoles are sold at a big loss

Will there be a season 2 of Cyberpunk: Edge Runners?

Which Wi-Fi router to choose for an apartment: tips for choosing the right router for your home