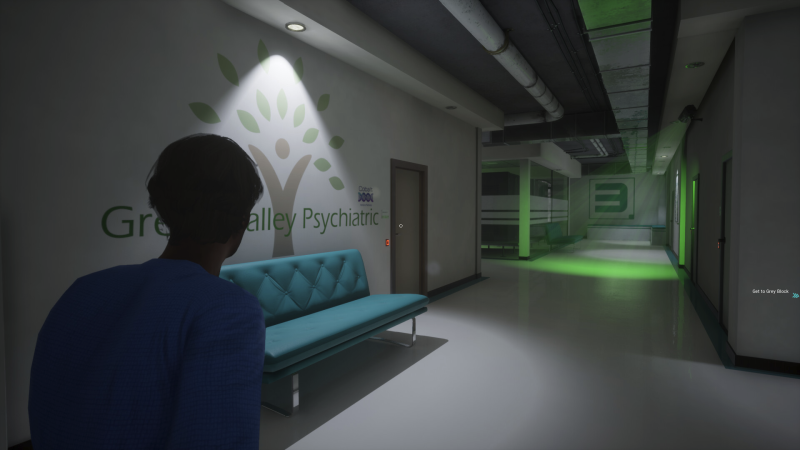 Gray Block is the first release from new indie developer Silver Rat Studios. Designed as a short story to capture the essence of future releases, Gray Block is a slow-paced psychological thriller that combines the plot, characters and cinematic elements of The Last of Us with the web of conspiracy, corporate intrigue and hacking elements from Deus Ex.

Unravel the web of conspiracy as you help Theo Church escape from the mental hospital sent to him by his wealthy and powerful father in this story-driven stealth adventure.

Theo Church was the victim of a massive conspiracy conceived by his wealthy and powerful father, David, which had him committed to the Green Valley Psychiatric Hospital (a hospital of which David is the main sponsor) for the rest of his life.

On that fateful night, Nikki Salzano, part of the original conspiracy, breaks into Green Valley to help Theo escape. However, like a good infiltrator, Nikki knows that in order for Theo to completely break free from his father’s grasp, he needs to gather evidence proving there was a conspiracy to commit it.

In the role of Theo, you will have to move through the hospital halls as stealthily as possible, collecting as much evidence as possible, hacking computer terminals, finding paper documents and photographing objects. You will have to maneuver around the guards and lure them out of their offices so you can access their terminal and increase access to your key card. This will allow you to delve deeper into the hospital and uncover more of its secrets, with the ultimate goal of reaching the highly secure, state-of-the-art research wing donated by Theo’s father, the Church Institute for Psychological Research, but known to Green Valley patients as the Gray Block.

WoW: Dragonflight: Are the icons too pixelated for you? There are HD icons per addon here

Monuments Flipper will be released on November 14 in Early Access