Xbox Games With Gold: These Two Games Are Free In November!

Sony had submitted, Microsoft has now followed suit and has announced the free games at Xbox Games with Gold in the new month of November. Here we tell you what you can look forward to! 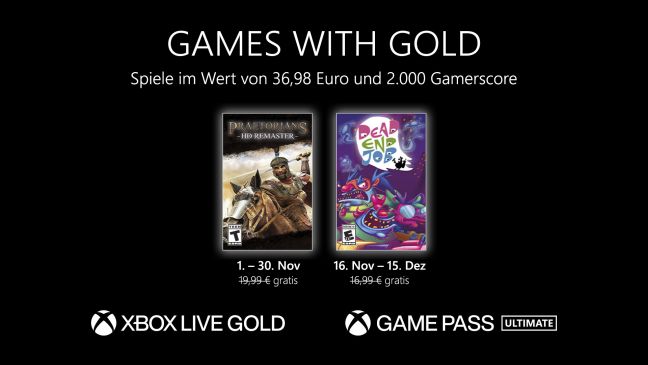 In November, Microsoft will of course again be offering free full versions for Xbox Live gold membership subscribers. Since the conversion and the retirement of the old Xbox 360 titles, the line-up still consists of two titles for the more current platforms Xbox One and – thanks to backwards compatibility – Xbox Series X/S.

First up this time is the Praetorians HD Remaster, which will be available from November 1st to November 30th; the strategy game normally costs 19.99 euros according to the RRP. Here you can immerse yourself in the heyday of the Roman Empire and, in addition to the Romans themselves, also lead Gaul or Egypt in real-time strategy battles. Each army has individual strengths and weaknesses that must be considered as you plan your rise as Emperor. More than 20 campaign missions await you in single player.

Title #2 of the new month is Dead End Job, which is available from November 16th to December 15th and costs €16.99 otherwise. What’s the matter? Some ghosts seem to have survived Halloween and made it into November. Now it’s your job to eliminate the escaped ghosts in the crazy game world.

Strap a vacuum cleaner to your back and arm yourself with a plasma cannon to battle the paranormal plague as part of Ghoul-B-Gone, the best paranormal pest-fighting game around in this co-op, procedurally generated shooter with twin-stick controls.

Commandos 2 HD Remaster and Praetorians HD Remaster can be pre-ordered now and grant access to the closed beta with all game content.

The Last of Us: free-to-play standalone multiplayer? The rumor is gaining momentum with a new clue

Cheap Netflix subscription is coming: These are the limitations