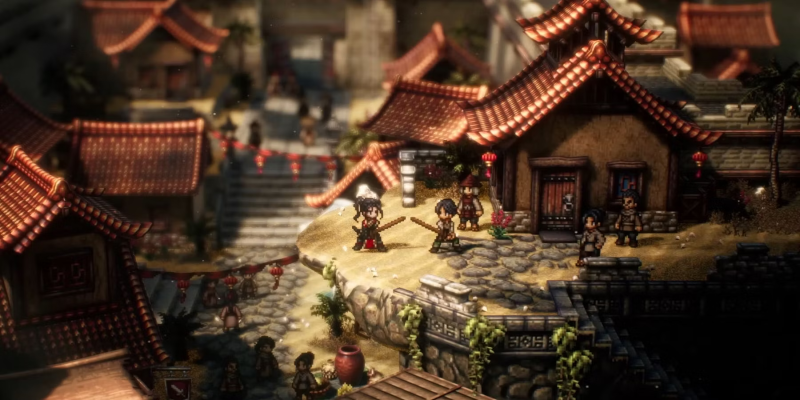 One of the biggest improvements in Octopath Traveler 2 over its predecessor is how players interact with each other. In the previous game, the individual stories of Octopath Traveler were never intertwined and were limited to who was the main character of a particular storyline. The only real interaction with each other is in the mini-dialogues, which also don’t affect the overall narrative, and the real ending, in which all the plot points come together, was called particularly weak. The developers of the sequel discussed their approach to making these characters more connected.

In an interview with Famitsu, producer Masashi Takahashi and director Keisuke Miyauchi shared their thoughts on this new feature, known as “cross stories”. Miyauchi stated that when the team received feedback from fans, one of the biggest things that could be improved was the non-travel dialogue between the protagonists of Octopath Traveler. Miyauchi agreed with this, which is why this feature was implemented. Takahashi also supported him, stating that since the eight characters are so different, having these stories where they talk to each other and have adventures together makes them feel more like a group of travelers.

However, according to Takahashi, these stories are spin-offs and the focus is on eight separate character stories. While in the last game the main story of each character consisted of four chapters, in Octopath Traveler 2 the story structure will go in a different direction, each story will be “completely different” for each character.

Miyauchi confirms that since the player will have to juggle eight heroes, mechanics, and stories, the chapter structure of Octopath Traveler 2 will be changed so that players can enjoy it in different ways. He also claims that with the same “flow” of character development, it becomes easy to guess how the story will develop, and the developers wanted to give the player the feeling that he was playing a “completely different” role-playing game with each character.

BLUETTI has new promotions for Halloween

Formula One overall standings after the Mexican Grand Prix

Cassette Aux: Music from mobile phone on cassette player! As!?