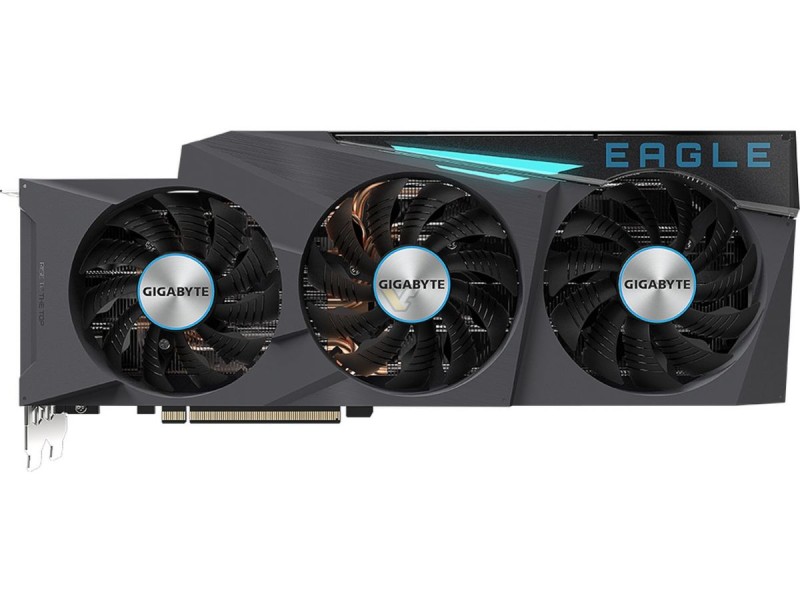 Gigabyte has not yet released the GeForce RTX 4080 Eagle, although such a model has appeared in leaks. This series will be another triple fan variant following the WindForce, Gaming and AORUS series.

The new design is larger than its predecessor, the RTX 3080. The card has been scaled up to 3,5 slots and equipped with the same 110 mm fan as the RTX 4090 Gaming OC graphics cards. It becomes clear that Gigabyte will be using the same cooler for the RTX 4090 and 4080 Eagle series.

The video card is equipped with one 16-pin power connector and the usual ports – three DisplayPort 1.4a and one HDMI 2.1. It is worth noting that the RTX 3080 Eagle series had an additional DisplayPort, but this will no longer be available on the Gigabyte RTX 40 models.

This model will be available with factory overclocking, but the exact frequencies have yet to be confirmed. It is equipped with a GPU AD103 with 9728 CUDA cores and 16 GB GDDR6X memory. Obviously, a 12 GB VRAM option is not foreseen due to NVIDIA’s cancellation of this model.

The next-generation NVIDIA RTX 4080 graphics card will go on sale November 16th at a price of $1,199. In Gigabyte’s lineup, the RTX 4080 Eagle is the simplest and most likely will come at the suggested retail price.

Today, 8 games are removed from Game Pass at once - for Xbox and PC

Xiaomi Pad 6 may have Snapdragon 8 Plus Gen 1 and 14-inch screen, says rumor

PlayStation 5: Was the best-selling console in the US in October

Surviving the Aftermath – Shattered Hope: The moon will fall on November 3rd

Ryan Garcia: Lomachenko is too small for lightweight