Synology, a leading self-hosting player, introduced a new flagship, DS923+, and a new version of its popular software, DSM 7.2. 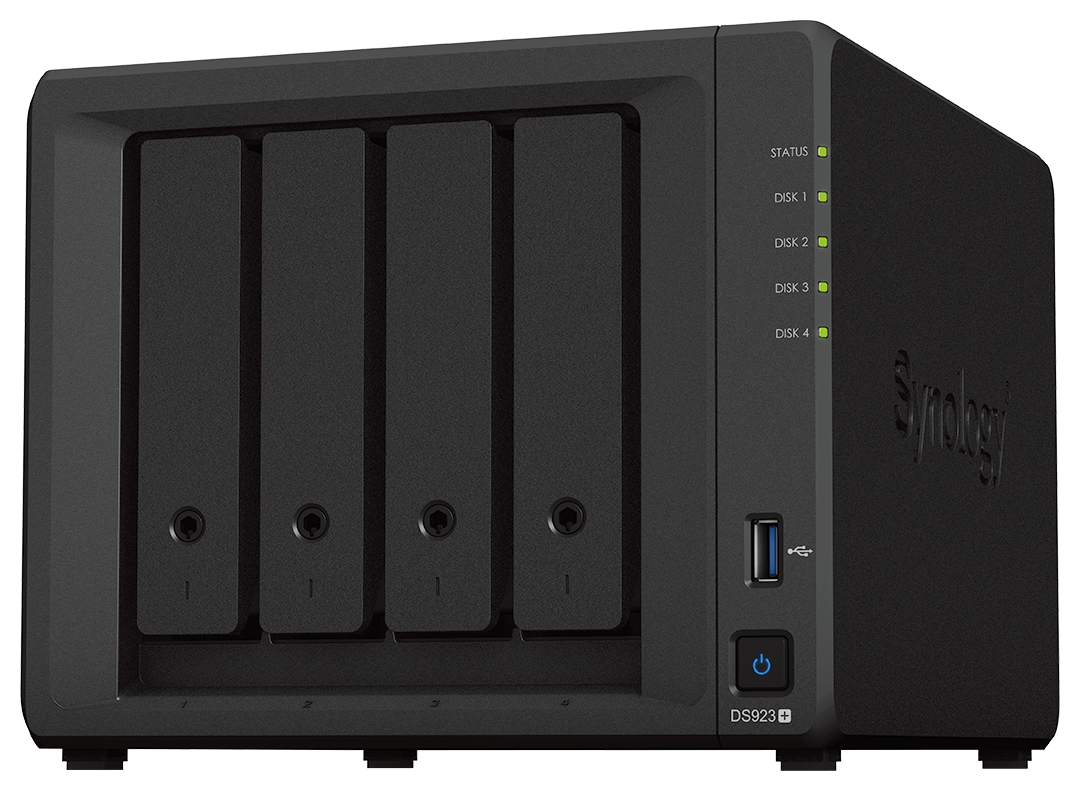 On Thursday, “Synology 2023”, the new edition of Synology’s global annual conference, was held simultaneously in Paris and other world capitals. The storage specialist is focusing more and more on the company, but it has nevertheless made several more general public announcements, which we relay.

In its historic storage server sector, the Taiwanese company has made two announcements that will be of interest to individuals and professionals who wish to practice self-hosting or who have large storage needs: it has renewed one of its best -sellers and announced the next version of its software.

It also announced the WRX560, the missing link in its range of Wi-Fi 6 routers, to which we have devoted a separate article.

Synology has therefore formalized the DS923+, the 2023 vintage of the second 4-bay model in its Plus series, one of the most interesting NAS on the market. It succeeds the DS920+ launched in the summer of 2020 and is an economical alternative to the DS1522+ launched this summer.

And it is a very good vintage since it in turn adopts the miniature PCI Express slot allowing it to finally offer, as an option, an Ethernet port at 10 Gigabits / s (10GBASE-T). It thus promises 625 and 559 MB/s respectively in sequential reading and writing with this option. 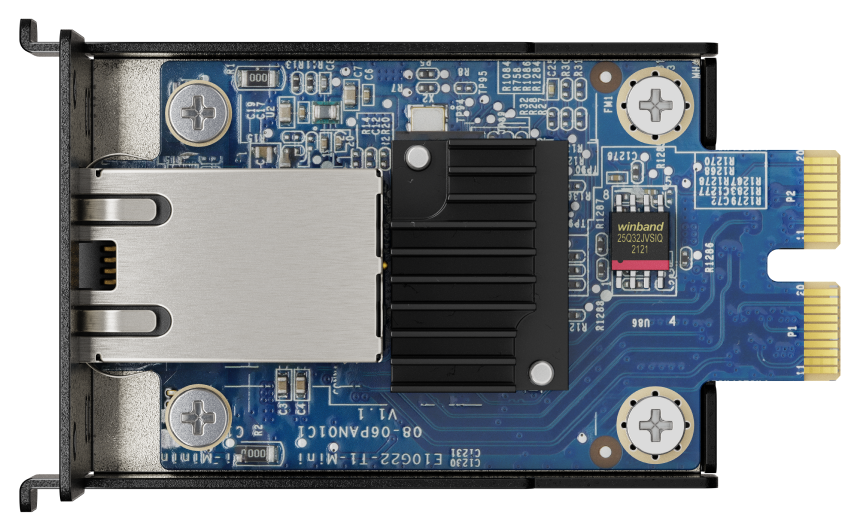 Until last year, Synology’s top 10G-enabled price was the DS1621+, a top-of-the-line model twice as expensive. Synology will have been slow to democratize “Multi Gigabit” (Ethernet at more than 1 Gb/s), and it remains expensive, since the E10G22-T1-Mini module is sold for 180 euros, while a USB or PCIe to 2.5GBASE-T costs 30 euros. The Taiwanese company will have long enjoyed the competitive advantage provided by its DSM software, the most polished on the market, since its competitors Asustor and Qnap have been integrating 2.5 Gb / s Ethernet ports into consumer products for a few years. already.

2.5GBASE-T would have been an interesting compromise, since it takes high-end processors and a large number of parallel hard drives or SSDs to exceed its 312.5 MB/s. In addition, 2.5GBASE-T is standard on a growing number of computers and routers. But Synology ignores it for the moment, so that those equipped with “2.5G” must pay for a 10G option that they will only use a quarter of. But at least Multi Gigabit is finally accessible to individuals and freelancers who value DSM software. 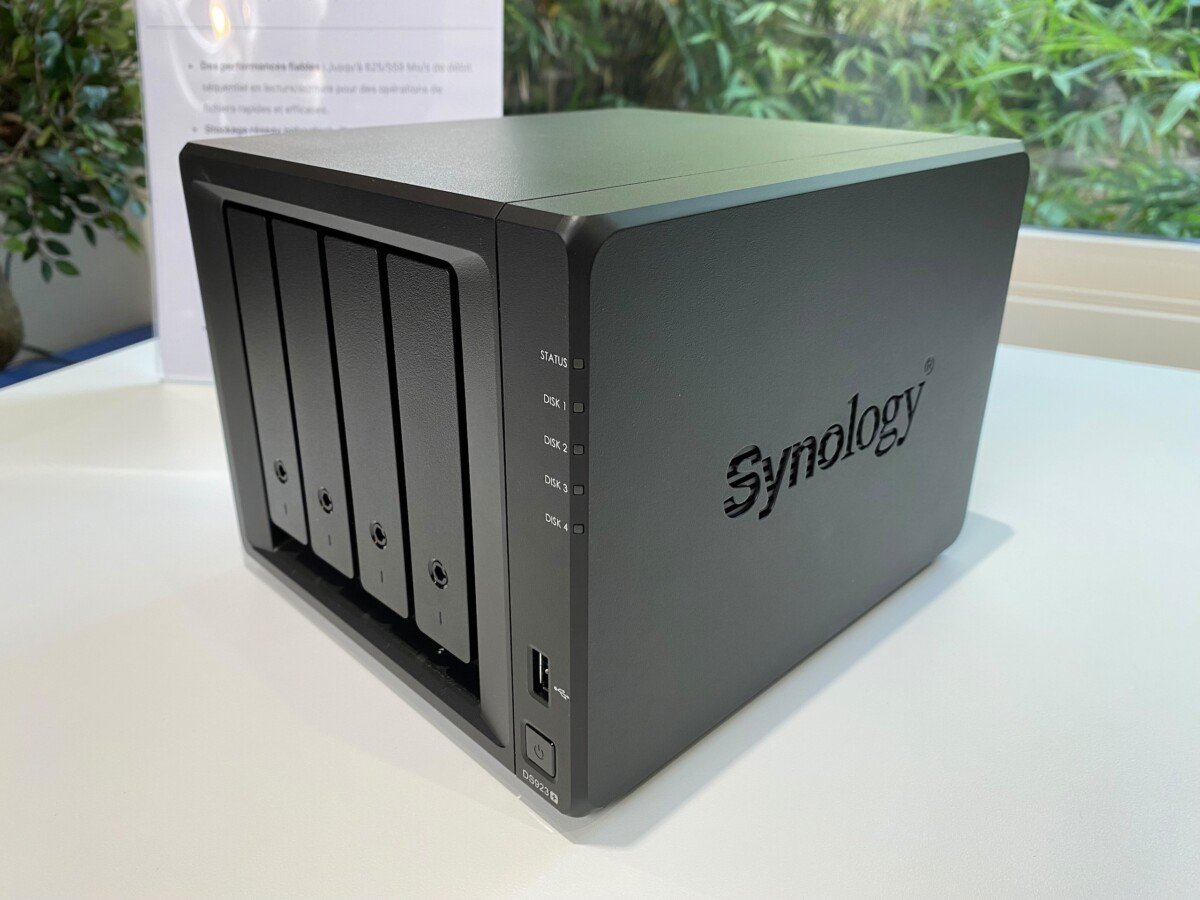 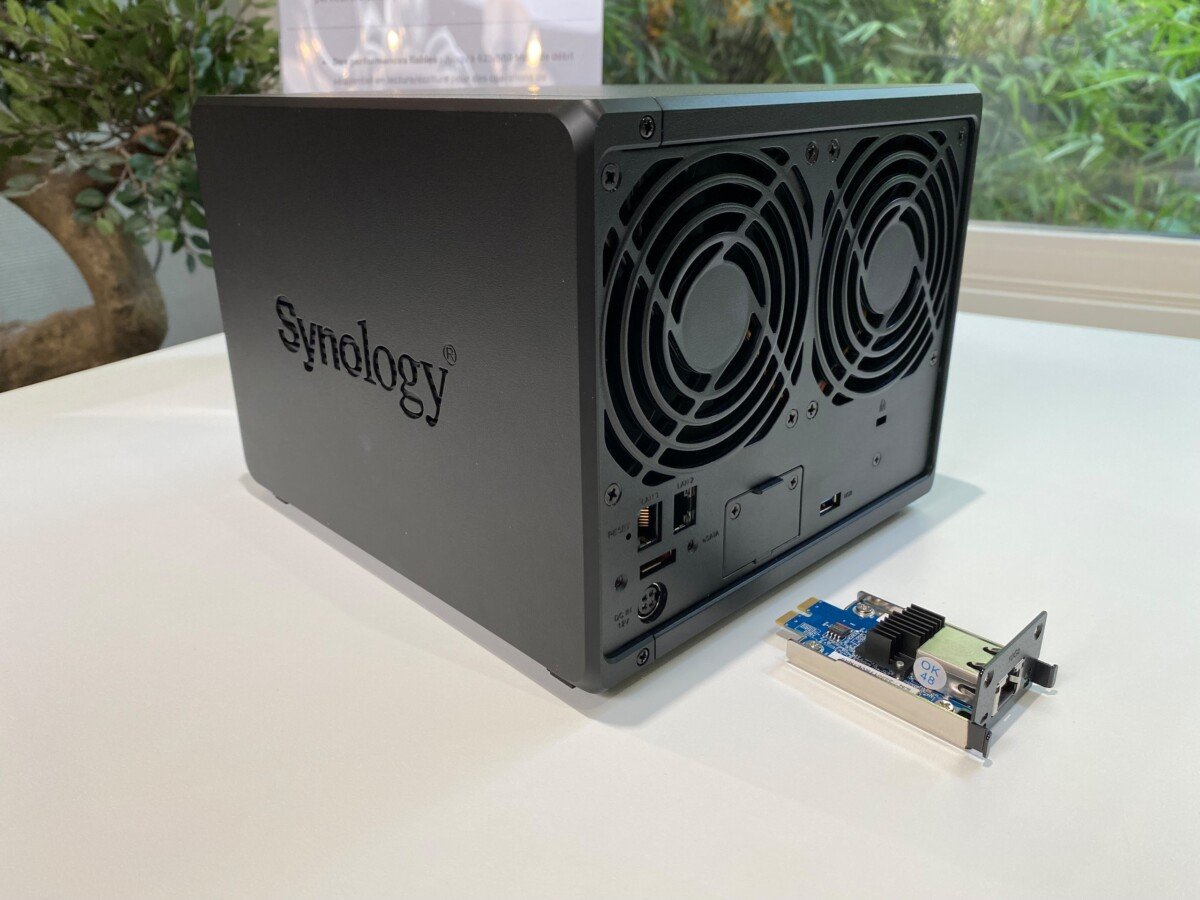 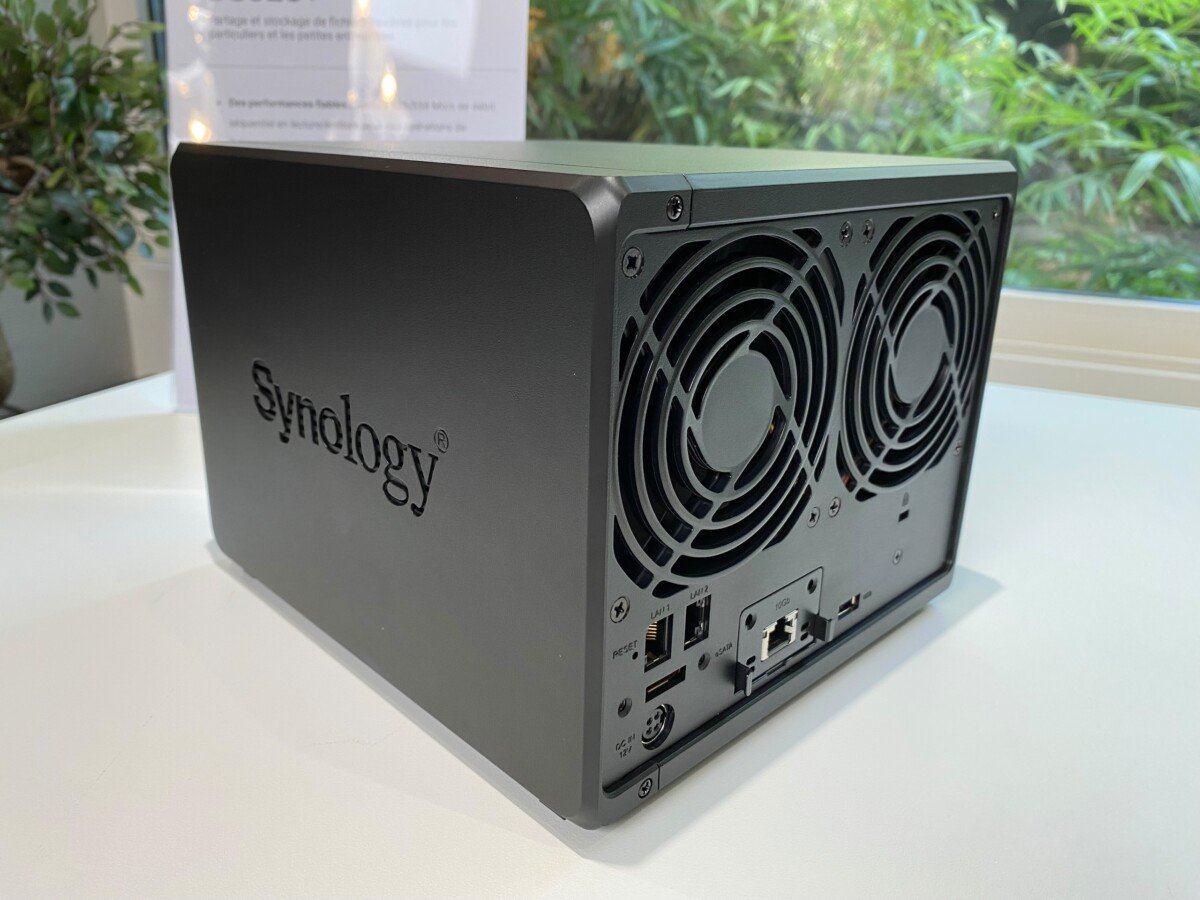 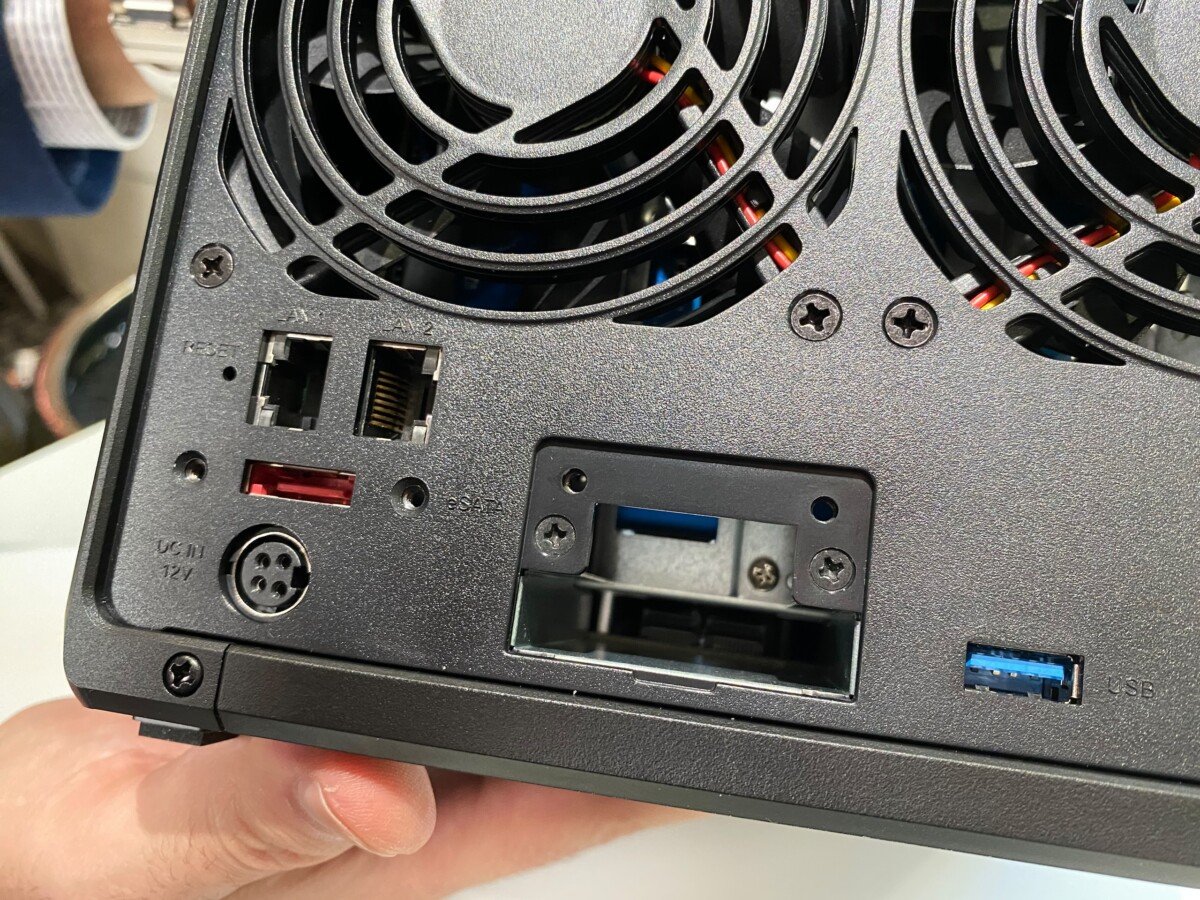 No more hardware transcoding of video, but error-correcting memory

A 2-core/4-thread Zen processor clocked at 2.6-3.1GHz, the Ryzen Embedded R1600 performs a bit better than the 4-core/4-thread Intel Celeron J4125 clocked at 2.0-2.7GHz of the DS920+, but it does not support hardware video transcoding, which allowed its predecessor to convert video with low power consumption, for example to stream 4K video at 720p to a smartphone. Admittedly, transcoding is becoming less and less useful since most devices now provide hardware decoding of 4K video. In return, support for error-correcting RAM (ECC) guarantees better data reliability. 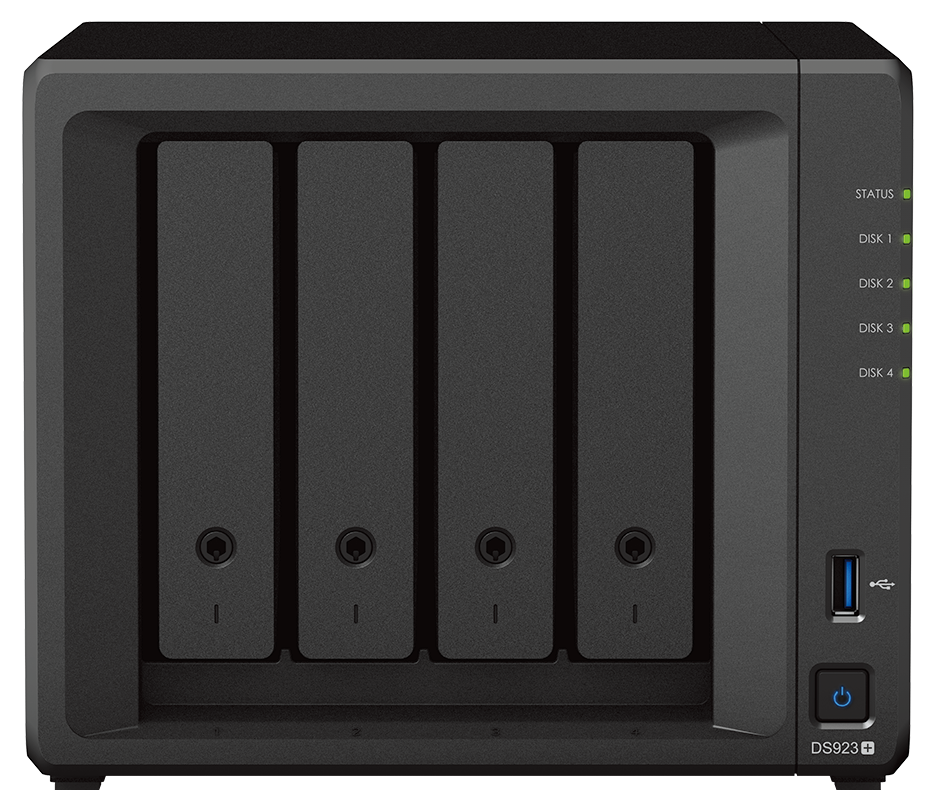 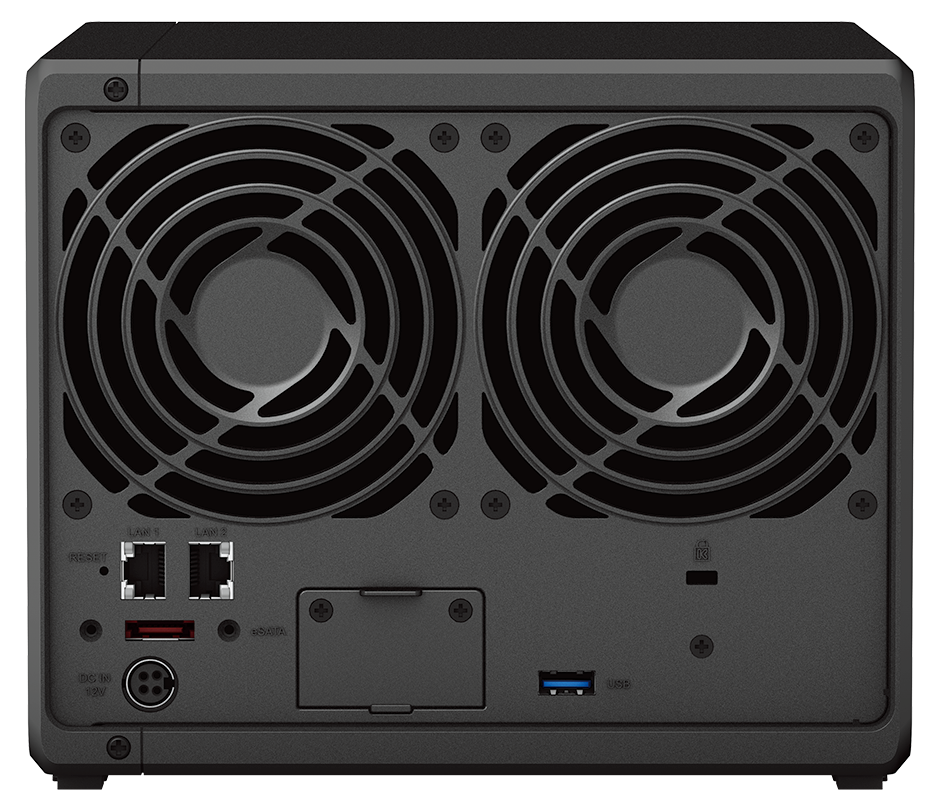 Synology DS923+ price and launch date are not yet final. But a representative of Synology France blew us the price of 529 euros HT (634.80 euros including tax). Price to which it will be necessary to add that of the hard disks. 4 hard drives of 4 TB for example, for a usable capacity of 12 TB in RAID 5 or in SHR (Synology’s proprietary redundancy solution), cost around 480 euros including tax.

Enough to create a personal cloud and “de-googlize” its online storage, online photos and videos, even emails, etc. As many services as Synology DSM software and associated applications allow you to host at home.

Synology servers are based on an in-house operating system called DiskStation Manager (DSM). It comes in the form of a windowed interface, with a desktop, which is accessed with an internet browser. This interface allows you to configure the basic functions of a server and to configure the dozens of additional functions it offers. Some of these functions then have their own web interface and their own computer and smartphone applications. This is for example the case of Synology Drive, an alternative to Google Drive, Dropbox and others, or Synology Photos, an alternative to Google Photos, iCloud Photos, etc.

Synology took advantage of its annual conference to unveil some of the new features of DSM 7.2, scheduled for the 1st quarter of 2023. 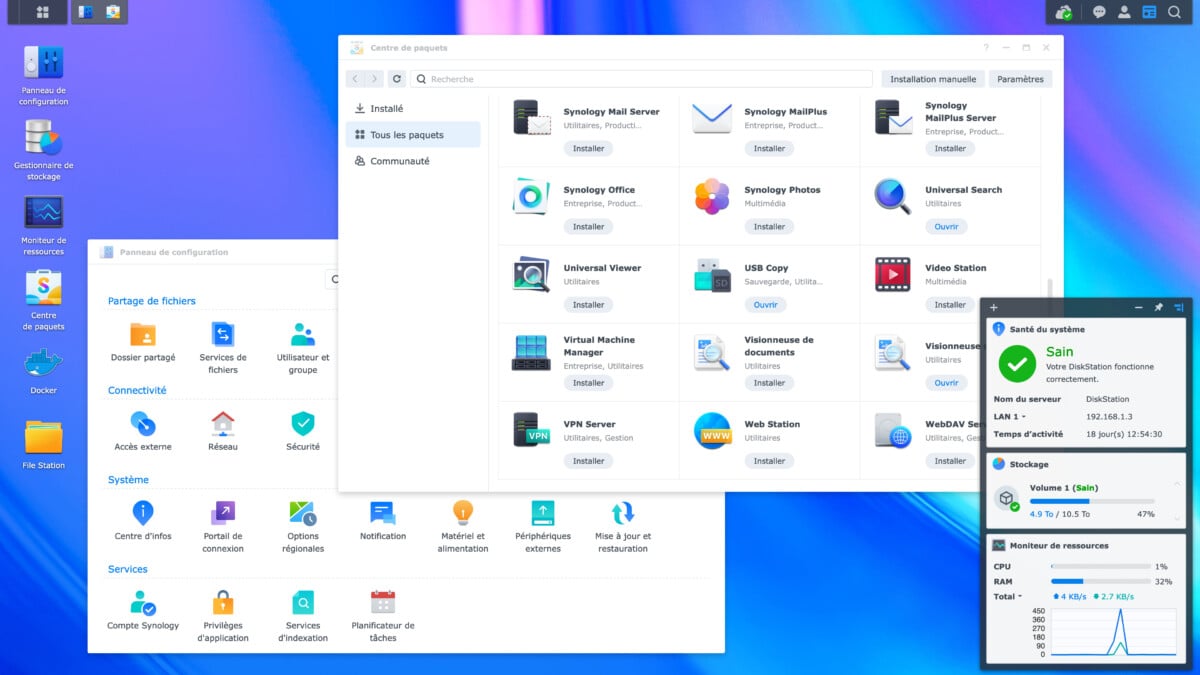 For home users and small businesses, special mention is made of support for SMB Multichannel, which allows a single computer to establish multiple connections during a file transfer. From the point of view of an individual, it is a welcome palliative to the absence of 2.5 and 5 Gb/s ports on the brand’s servers. By simultaneously connecting the 2 or 4 Gigabit Ethernet ports of your NAS to a router or switch compatible with LAG (Link Aggregation), you can enjoy transfers at 250 or 500 MB/s from a single computer, provided that whether connected in 2.5GBASE-T, in 5GBASE-T or also via several 1GBASE-T links. Until now, the 2 or 4 Gigabit Ethernet ports allowed servers to reach 2 or 4 Gb/s, but with several computers in parallel, each remaining capped at 1 Gb/s.

DSM 7.2 will also bring support for encryption of entire volumes, and no longer just shared folders, which will lift restrictions on file name lengths and transfer rates (Synology announces gains of up to 50%).

Finally, independently of DSM 7.2, Synology announces that Active Backup will be available for Mac by the end of 2022, providing a welcome alternative to Time Machine for computer network backup.

COD Modern Warfare 2 and Bayonetta 3 on the podium of the UK rankings: new Top 10

Tesla at half price? Just go to China to get a clone

EBay offers: Call of Duty Modern Warfare 2 for Xbox and PlayStation at a discount a few days after release