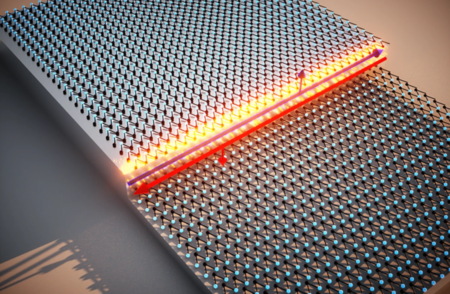 Many quantum processes can only be observed at very low temperatures, limiting their usefulness in the real world. Princeton researchers have demonstrated a strange quantum state that occurs in a material at room temperature.

A topological insulator is a material with a structure that conducts electrons in a unique way. The bulk of the material is an insulator, completely preventing the flow of electrons through it. However, thin layers on its surface and along its edges are highly conductive, allowing electrons to move freely at high speeds. These strange properties are indicative of some intriguing quantum states of topological insulators that could be useful for creating new quantum technologies.

Most quantum states are extremely fragile and break when tampered with. Heat is the main trigger: when materials are heated, the atoms in them vibrate at higher energies, which disrupts the quantum state. Most experiments using quantum effects must be carried out at temperatures close to absolute zero, when the movement of atoms slows down dramatically. This circumstance makes such technologies impractical for widespread use.

In a new study, the Princeton scientists found a way around this and demonstrated quantum effects in a topological insulator at room temperature. An inorganic crystalline compound, bismuth bromide, was chosen as the object of the experiments.

This material was found to have the desired width of the insulating barrier in which electrons cannot exist at certain energy levels. This zone should be wide enough to shield the process from thermal noise, but not so wide as to disrupt the spin-orbit coupling effect of the electrons, which is vital to maintaining their stability. Bismuth bromide has been found to have a barrier width of over 200 millielectronvolts, which is the “golden ratio” for maintaining a stable quantum state at room temperature.

The team confirmed their discovery by observing the so-called quantum spin hall edge state, a property unique to these topological systems. The researchers say this breakthrough will be useful for the development of quantum technologies such as spintronics, a way of encoding data in the spins of electrons that is more efficient than modern electronics. The study was published in the journal Nature Materials.

Marvel x EA: an Iron Man game and two “exceptional experiences” in preparation, the details of the juicy collaboration

The Walking Dead: This happens in "Outpost 22"

Ilkay GUNDOGAN: “We were a little better, but the result is fair”