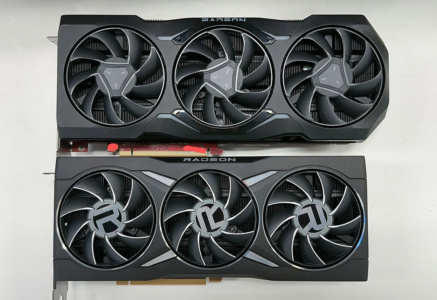 The AMD Radeon RX 7900 video card featured in the photo by Twitter user @9550pro (the one with the red board) looks like a prototype – judging by the protruding pins at the bottom. But its design clearly matches the theme that AMD briefly showed at the end of August.

The card is longer than the Radeon 6900 and has the same power connector configuration as the RDNA2 adapters – a dual 8-pin connector. It could be either the Radeon 7900 XT or the flagship 7900 XTX, which likely has the same three-fan design.

This prototype is not the final product – it clearly lacks the bottom bezel found on all high-end RDNA2 reference models. Also, the red PCB is likely to be replaced with a black one. The VideoCardz resource has compiled the expected specifications of the novelty in a table:

AMD is going to announce the Radeon 7900 this Thursday, November 3rd. The sale is rumored to start in early December. It is planned to announce at least two cards, including 7900XT and 7900XTX, but possibly not limited to them.

FIFA 23: "I'm on the blacklist", this streamer compares FUT to a pay-to-win and EA does not give him gifts!

House of The Dragon: Will Henry Cavill Be In The Series? Actor responds!

Overwatch 2: Double XP – get it this weekend!