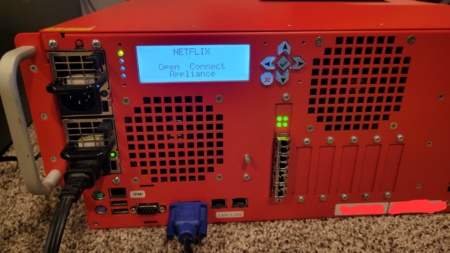 Reddit user PoisonWaffle3 detailed how he managed to get his hands on one of Netflix’s caching servers for free. Despite being a decade old, the server is solid hardware even by today’s standards and comes with an impressive 262TB of storage. The original post has now been deleted, but the comments remain.

The author of the message claims to have obtained the Netflix server at his place of work, from the Internet Service Provider. The server appears to have been in use for many years, but has been replaced with newer hardware, allowing PoisonWaffle3 to get it for free.

The cache server was part of Netflix’s open Content Delivery Network (CDN). This system is still in use and is intended to reduce the overall bandwidth requirements of the Netflix platform by providing providers with their own caching hardware. This allows you to play popular content from the servers of local providers, rather than streaming content directly from Netflix’s own servers.

The device is bright red and is made in the form factor of a 4U rack server chassis. A small LCD for monitoring server status is located on the front panel next to the VGA and USB ports. On the left are thin power supplies that are likely hot-swappable.

Specs include a Supermicro motherboard with one 10-core Intel Xeon E5 2650L v2 chip with Hyper-Threading Technology, 64GB of DDR3 memory, and a 10GbE network adapter. The system uses six 500GB Micron SSDs and 36 7.2TB 7200rpm drives for storage. The server originally ran on FreeBSD, but the system was removed after decommissioning – the new owner installed the TrueNAS open source NAS system on it.

According to PoisonWaffle3, the old Netflix caching server was in need of a minor overhaul, which included replacing a few noisy fans and one failed drive. He says the device will get a second life by working as a home NAS.

Call of Duty: Modern Warfare 2: Is Activision at risk of a hotel lawsuit in Amsterdam?

God of War: The current sales figures of the reboot

In Runet, the number of bots has increased tenfold

Leipzig won before the match with Shakhtar, Bayern scored 6 goals