Aroged Kutai Kartanegara – IKEA has reportedly threatened to sue the developers of the survival horror game, The Store is Closed. The reason, of course, is because of the similarity in logo design, and the uniforms of the “furniture shop” employees in the game.

The Store is Closed is a survival horror game, which comes with an unusual premise. Where players will play as “a consumer trapped in an ‘infinite furniture store’, and accompanied by mutant staff who will hunt them down”. And the only way to survive is to explore the hallways in the shop, and use the available furniture to make weapons and fortifications.

After reading this kind of description, readers will surely think that this game is like being set in one of the stores owned by IKEA. A furniture retail company from Sweden, known for its “self-assembled” furniture products. And even though this game isn’t actually set in the furniture store, creator Jacob Shaw once said that this game is an “Ikea game without limits”. This is likely to be of particular concern to the original IKEA company, to the point of sending a legal representative to Shaw.

Also read: Pokemon Go Players Mocked By Elderly And Their Children, Why? 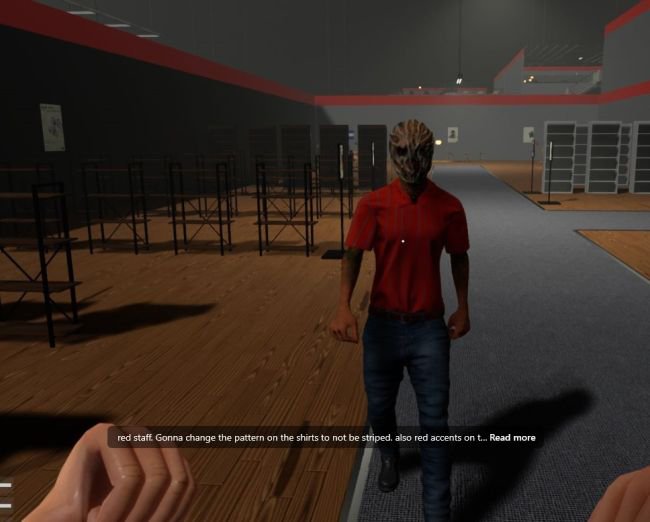 The Store Is Closed | Threat of Lawsuit From IKEA

Threat of Lawsuit From IKEA

Quoting from the PC Gamer website, Shaw has reportedly been approached by an IKEA legal representative, who sent him a letter demanding to change his game. And if he refuses, then the Swedish furniture company threatens to take this lawsuit to court.

“Our client (IKEA) has become aware that you are developing a video game, The Store is Closed, which uses, without our client’s permission, an index associated with a well-known Ikea store,” reads the lawsuit, which Shaw shared with PC Gamers.

“Your game (also) uses blue and yellow markings with Scandinavian names in stores, blue square-like buildings, yellow vertically striped shirts identical to those worn by Ikea personnel, gray stripes on floors, furniture that looks like Ikea furniture, and a product nameplate that looks like an Ikea signage. All of the above immediately indicates that the game is taking place in the Ikea store.”

Shaw himself said he would comply with the demands, as he would “really prefer (to) not be prosecuted,” but he also reiterated that he was still unsure which options would satisfy IKEA.

“Their requests are a bit vague. Like, ‘the furniture looks like Ikea furniture,’ that’s not very specific.” He said to PC Gamers.

For now, he’s “just (will try to) rip off anything blue or yellow, and add some flashy reds everywhere,”.

“Get rid of all the Scandinavian furniture, replace all the posters, maybe delete the paths [dari lantai].” he added.

As for furniture, Shaw himself said that some of the items in the game furniture package he bought already had Scandinavian names, so he would start by removing them.

Resident Evil 4 and the games coming out in the first quarter of 2023: the list is scary

Phil Spencer on future consoles: "We have ideas for what we could try next"