PS5: Reaches Next Milestone – Profits and Number of PS Plus Users Down

As Sony announced in the annual report for the past quarter, the PlayStation 5 reached the next major milestone. Compared to the same period last year, however, both profits and the number of PlayStation Plus subscribers were down.

During the course of tonight, Sony presented the annual report for the second quarter of the 2022/2023 financial year, which ended on September 30, 2022.

As can be seen from the business figures presented, 3.3 million PlayStation 5 consoles were shipped to retailers in the second quarter (July 1 – September 30, 2022), just like in the same period last year. This brings the delivery volume of the PS5 to 5.7 million units in the first half of the current financial year. Despite these numbers, Sony says it is sticking to its declared goal of wanting to deliver 18 million PS5 consoles in fiscal year 2022/2023.

At the same time, the Japanese electronics giant announced that the PlayStation 5 reached the next big milestone in the last quarter, shipping over 25 million units worldwide. Unfortunately, it has not been revealed how the delivery figures are distributed between the two models of the console.

As the annual report further shows, the revenue generated by the Game & Network Services division, which also includes the PlayStation business, increased by twelve percent compared to the same quarter last year to 4.88 billion US dollars. Profits, on the other hand, fell 49 percent to $284.6 billion. A development that Sony attributes to events such as unfavorable exchange rates, investments in studios like Bungie or increased development costs.

The increased turnover, on the other hand, is due, among other things, to the last quarter increased price of the PlayStation 5, which according to Sony had no negative impact on the demand or sales of the PS5. Software sales declined in the second quarter, as did Game & Network Services earnings. While 76.4 million PlayStation games were sold in the second quarter of the 2021/2022 financial year, it was 62.5 million in the past quarter. 63 percent of all games were brought to the man or woman digitally.

The number of active users on PlayStation Network decreased to 102 in the second quarter of 2022/2023 from 104 million in the same quarter last year. 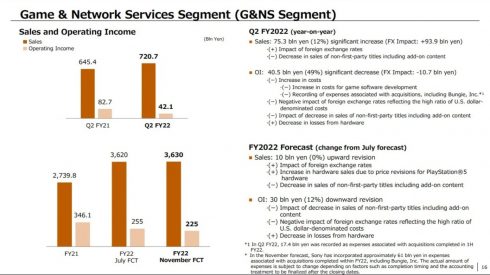 Killer Klowns From Outer Space: The Game - Helloween trailer compares the game to the 1988 film - Cerealkillerz

Killer Klowns From Outer Space: The Game - Halloween Trailer compares the game to the 1988 film - Cerealkillerz